Judon tallied ten quarterback pressures in the win over the Chargers. 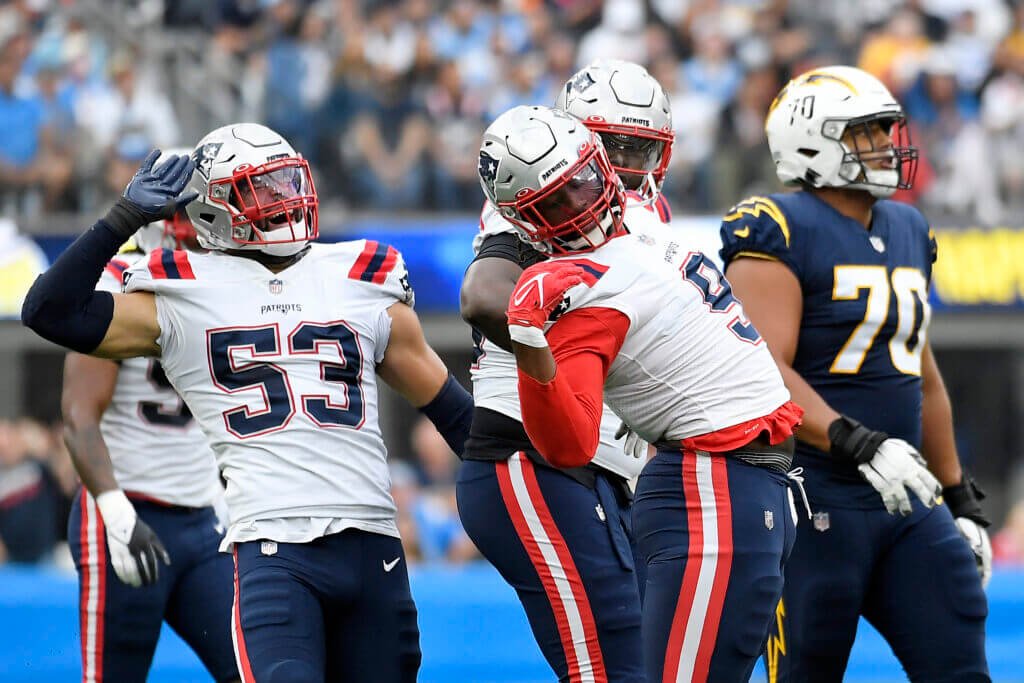 The Patriots delivered their first quality win of the season by upsetting the Los Angeles Chargers on the road at SoFi stadium on Sunday afternoon.

New England’s defense led by two interceptions from safety Adrian Phillips (one pick-six) and a season-high ten QB pressures by linebacker Matt Judon held LA’s passing attack mostly in check. Judon registered the most total pressures in a game for a Pats’ pass rusher since 2015.

Offensively, rookie Mac Jones struggled with his downfield accuracy but tied a season-high by completing a pass 37 yards in the air to Nelson Agholor and closed out the win efficiently.

Here are a variety of advanced stats from the Patriots’ 27-24 victory over the Chargers:

As noted above, Patriots quarterback Mac Jones had his least accurate passing performance statistically speaking against the Chargers.

Jones’s completion percentage over expected (-11) and adjusted completion rate (57.6%) were both season-lows, as it appeared that his internal clock was sped up at times due to LA’s pass rush. However, Mac was only under pressure on 23.1% of his drop-backs overall.

The uneasiness in the pocket most likely relates to a few free runners and quarterback hits early in the game. Eventually, Mac worked his way out of it to make plays late to seal the win.

Although he only hit on one of his four deep attempts, we are seeing a far more aggressive Jones in terms of throwing downfield in recent weeks. In the last three games, 14.1% of Mac’s pass attempts are throws of over 20-plus yards compared to ten percent in the first five games.

The 44-yard completion to Agholor was an excellent quarterback play by Jones. The Pats get what they want with Agholor on the deep over route against a single-high safety. In his drop, Jones looks off the safety by opening and pointing his eyes towards the left sideline. Then, he eludes a rusher by stepping up in the pocket and drops a dime downfield.

Jones was also money on the Patriots’ 14-play, seven-minute drive that put the game on ice, finishing the Chargers off by completing all four of his passes on the drive for 43 yards.

The Patriots’ rookie quarterback was hard on himself after the loss, but he out-played Justin Herbert and was a net-positive on the day by adding 0.09 expected points per drop-back.

New England’s offensive line is taking the heat this season for up-and-down performances, but their new starting five kept Jones clean for the second consecutive game.

In the win over the Chargers, Jones was only under pressure on 23.1% of his drop-backs, including just one sack and three quarterback hits. Over the last two weeks, the Pats’ O-Line is allowing a stingy pressure rate of 21.8% — that’ll undoubtedly get the job done.

This week, leading the way for the Patriots was right tackle Mike Onwenu who had a difficult matchup against Chargers star DE Joey Bosa. Bosa, however, only registered one hurry against Onwenu, with the Pats’ right tackle keeping the three-time Pro Bowler at bay.

Moving Onwenu back to right tackle and inserting left guard Ted Karras into the lineup may have saved the season along the offensive line.

Turning over to the defense, the Patriots’ pass rush led by star linebacker Matt Judon pressured Chargers quarterback Justin Herbert on 41% of his drop-backs, a big reason why the Pats won.

Here, the Judon-Barmore tandem combined for a sack late in the fourth quarter that milked more time off the clock. The duo runs a T/E stunt over the right side of the Chargers’ offensive line, with Barmore’s penetration allowing Judon to wrap around, and it’s a party at the QB.

Earlier, Judon sacked Herbert on a bootleg play-action concept where the Chargers are hoping the scheme will influence Judon to run himself out of position. Instead, he stays home on the bootleg and closes down on Herbert to make the play.

On the season, Judon ranks fourth in the NFL with eight sacks and sixth with 39 quarterback pressures (one pressure ahead of Aaron Donald). He’s an absolute force out there.

The bad news is the Patriots’ defense gave up runs of 75 and 28 yards against the Chargers, but the good news is that those two big plays accounted for 64% of LA’s rushing yards.

New England only allowed a success rate of 37% and 3.3 yards per rush on the 18 other carries by the Chargers offense on Sunday. In other words, it was two bad plays.

As no surprise to anyone, Judon led the Patriots with three run stops, making his final stat-line in all phases ridiculous: 1.5 sacks, eight quarterback hurries, three run stops, and one TFL.

The Pats need to clean up their run defense to avoid the explosive plays, but this wasn’t a complete breakdown with several bad plays.

We’ll do a full film review on how the Patriots defense shut down the Chargers’ explosive passing attack in the coming days, but the general outline was more zone than man coverage.

Only played their usual cover-1 on 16.7% of passing plays on Sunday.

The strategy caught Los Angeles’s second-year quarterback by surprise, with Herbert saying, “[It was] a lot of disguise. We were expecting a lot of man [coverage], but did not get a whole lot of that today.”

Here’s a good example of what the Patriots did to limit Herbert and the Chargers. New England lines up with six players on the line of scrimmage, then drops two linebackers out of the rush into coverage, simulating a blitz that never comes. The simulated pressure gets Herbert to get rid of the ball quickly, and the Pats play zone in the backend and close down the void in a hurry.

The Patriots’ secondary struggled with the zone coverage aspects to their game plan against the Cowboys a few weeks ago but were on their “A” game this week against the Chargers.