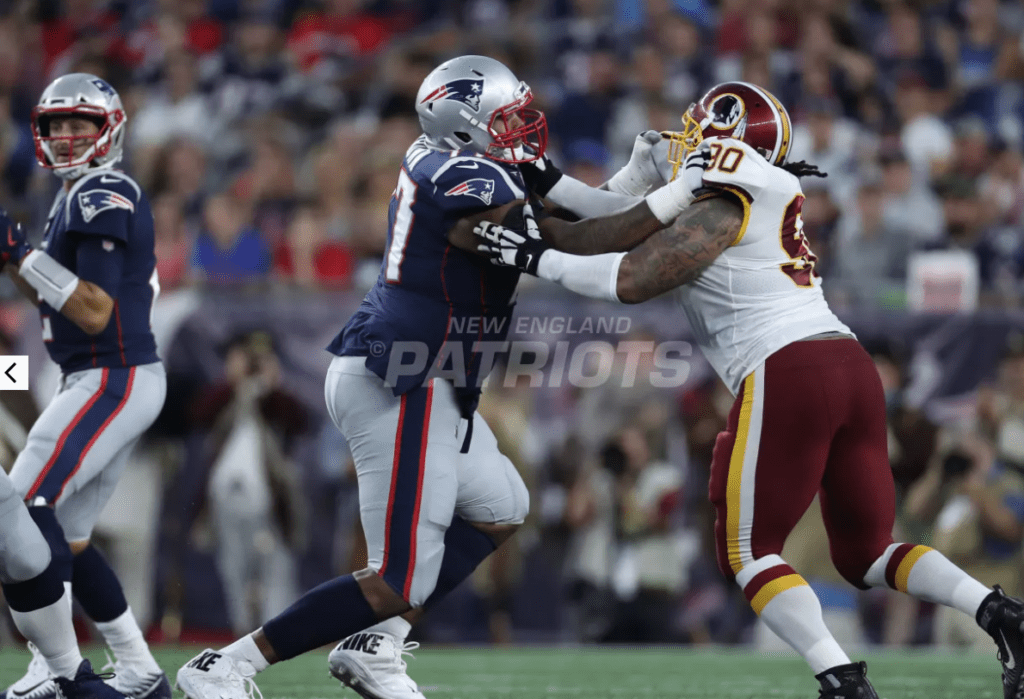 Below are a variety of advanced stats from the Patriots 26-17 win over the Redskins on Thursday night.

It was an up and down day for Patriots quarterback Brian Hoyer, who got the start on Thursday night with Tom Brady taking the night off.

Hoyer averaged just 6.3 yards per attempt despite completing 14-of-20 passes, and attempting five passes over 20 yards downfield, completing two of those, both to wide receiver Devin Lucien.

Hoyer’s aggressive nature against the Redskins at least showed that the Patriots’ backup quarterback wasn’t afraid to let it rip Thursday night, but the first half certainly had some worrisome trends with sporadic downfield accuracy and poor pocket awareness.

However, he also averaged a horrific 1.5 yards per attempt on six pass attempts when the Redskins blitzed, another example of how it was a mixed bag for the Pats’ quarterback.

Although the starting offensive line struggled at times in the run game, the unit was nearly flawless throughout the night, backups included, in pass protection.

On the whole, the Patriots’ offensive line allowed just three total pressures on the night on 29 passing plays, a great sign for a unit that has some new faces.

One of those new faces, starting left tackle Trent Brown, had a terrific performance against the Redskins not allowing a single pressure in 22 offensive snaps. Brown’s flexibility and quickness combined with his size and strength get you excited about the possibilities for him this season. He makes pass protection look easy with the ability to sit back and rely on his strength in his hands and body to do all the work while his length allows him to get depth out of his kick-slide.

Starting right tackle LaAdrian Waddle allowed the lone sack on the night but even on that play he could have gotten some help from right guard Shaq Mason and quarterback Brian Hoyer.

Overall, the Patriots’ starters appeared a bit out of synch in the run game, but they were terrific in pass protection for most of the night.

Backup defensive ends Eric Lee and Trent Harris paced the Patriots in pressuring the quarterback on Thursday night, but both did it late in the game against the backend of the Redskins’ roster.

The main stand out from this perspective was the Pats’ big free agent signing this offseason, Adrian Clayborn.

Clayborn only rushed the passer on 12 snaps on Thursday night be generated pressure on three of those rushes, proving why the Patriots made a significant financial commitment to him this offseason.

Sweet move here from Adrian Clayborn who had 3 hurries in just 12 pass rush snaps, per @PFF. Swings his inside arm through to disengage on the LTs hands then bends around the edge, forces the ball out on third down. #Patriots pic.twitter.com/WGhVgM1SKM

Clayborn’s hand usage and speed/bend around the edge will bring a pass-rushing element to the Patriots’ front seven that they desperately needed.

In the run game, linebackers Elandon Roberts and Ja’Whaun Bentley filled up the stat sheet with four run stops a piece, which tied for the NFL lead during Thursday nights action.

Loved seeing this kind of patience and vision from Ja'Whaun Bentley. Big guys on the DL two-gapping keep him clean and he waits for the RB to commit before crashing down to make the tackle. Textbook. #Patriots pic.twitter.com/dPpRnBNkBI

Bentley, in particular, flashed the instincts and nose for the football that made him a very productive player in college and made a statement in coverage holding up in that department as well. It’s only one preseason game for the rookie. But Bentley’s ideal size for the position, instincts and tackling ability are intriguing tools to work with as he continues to develop.

Let’s start with the positives.

It was a good night for two Patriots starters in the secondary in Eric Rowe and Patrick Chung.

Rowe allowed just one catch for five yards in 14 snaps, while Chung made a nice read and react tackle on a third down pass into the flat early on.

Rowe is solidifying himself as the #2 cornerback opposite of Stephon Gilmore, and was extremely competitive in coverage on Thursday night albeit in a small sample.

Now let’s get to some of the negatives.

Despite a dominant training camp, it was an uncharacteristically lackadaisical performance for Stephon Gilmore.

On the one hand, Gilmore didn’t appear to be totally locked in for a preseason game and the Patriots tested him in his limited snaps by putting him on an island one-on-one on the outside.

For example, on the long completion Gilmore allowed to Redskins wide receiver Robert Davis, the Patriots had eight players on the line of scrimmage with just a single-high safety playing extremely deep. Gilmore got beat on a crossing pattern by Davis in a tough coverage situation.

With that said, Gilmore is the #1 corner on this team and needs to be locked in once the games start to count, which I believe he will be.

It was also a tough night for linebacker Kyle Van Noy in coverage, as he allowed one of the two touchdowns the Redskins scored through the air. Van Noy missed his jam on Redskins running back Byron Marshall out of the backfield and was unable to catch up once he fell behind, and then he whiffed on a tackle attempt before Marshall scampered into the end zone.

The Patriots allowed the second-most receiving yards to running backs in the NFL last season, and the starting defense didn’t do anything to suggest they’ve fixed that problem.

Finally, it was an up and down night for youngsters J.C. Jackson and Keion Crossen, two rookies that are vying for roster spots.

Crossen rebounded nicely after failing to drop far enough in his zone on a touch pass by Colt McCoy that ended up going for a huge 57-yard gain, a coachable moment for the seventh rounder.

On the bright side, Crossen didn’t allow a completion the rest of the way.

As for Jackson, his physical nature on the outside was apparent, and positionally he was solid, but he’s going to have to refine his ball skills to make a push for a roster spot. On the longer of the two completions he allowed, Jackson was in good position to breakup the pass but didn’t get his hand in the passing lane. Another coachable moment for the undrafted rookie.