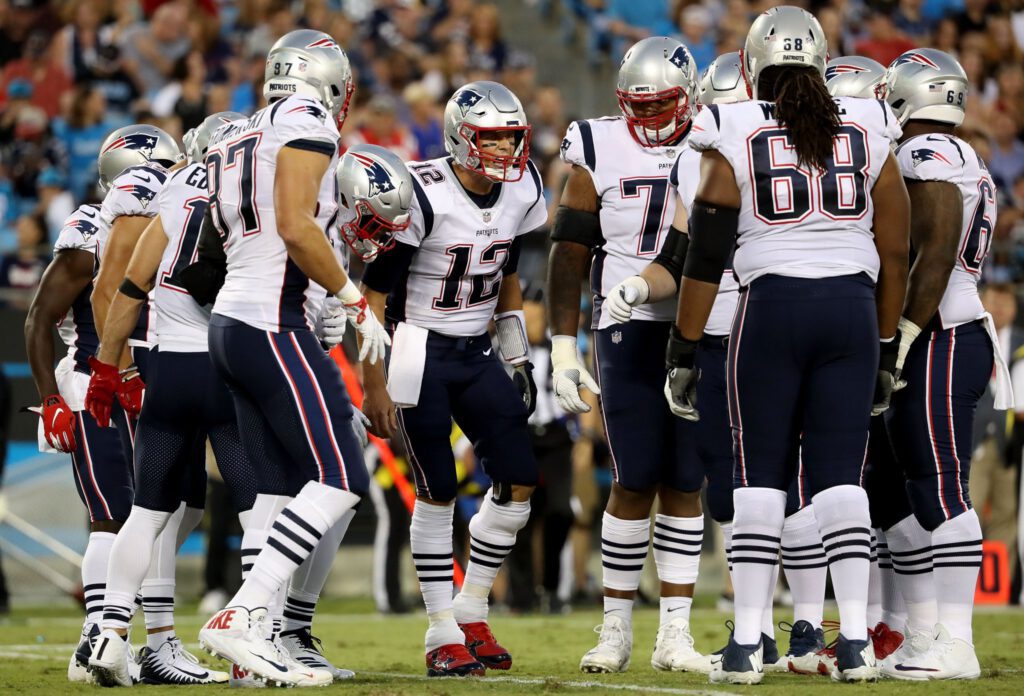 Below are a variety of advanced stats from the Patriots’ 25-14 loss to the Panthers on Friday night.

In his second preseason game of 2018, Tom Brady didn’t wait around in the pocket long enough to attempt many passes downfield.

In all, Brady attempted just two pass of ten or more yards in the air, and only four of his 18 pass attempts came after he held the ball for 2.5 seconds or more in the pocket.

Brady’s time to throw was a blistering 2.14 seconds, as the future Hall of Famer worked on his short game Friday night.

There was a clear emphasis on keeping Brady clean in the pocket as the 41-year-old continues to prepare for the 2018 regular season.

Due to the Patriots’ strategy to get the ball out quickly, Brian Hoyer also had a lightning quick release at 2.27 seconds, the Patriots’ offensive line didn’t have a lot of traditional pass set opportunities against the Panthers.

Nonetheless, the Pats only allowed a total of six pressures against Carolina, two of which running backs Mike Gillislee and Brandon Bolden were at fault.

The interior of the Patriots starting offensive line was clean in pass in protection, while the two starting tackles, Trent Brown and LaAdrian Waddle each allowed a hurry.

As for the backups along the offensive line, it was a strong performance for the second-team guards as James Ferentz (91.3) and Ted Karras (85.4) each finished the game with PFF grades above 85.0.

Third offensive tackle Ulrick John, who has skyrocketed up the Patriots’ offensive tackle depth chart, received an 80.6 pass blocking grade as he continues to make a push for a roster spot.

I asked head coach Bill Belichick about John on his conference call Saturday afternoon, and he was impressed with the veteran offensive lineman’s performance this preseason saying, “he learns well, he’s big, strong, physical player that again, has experience in the league but hasn’t had a lot of regular season game experience. But he’s done a good job for us.”

Belichick seemed happy with the performance of the offensive line overall in pass protection through three preseason games.

On the surface, the Patriots pass rush appeared to take a giant step backward against the Panthers after an eight-sack performance against the Eagles last week.

However, although they didn’t finish pressures like last week, Panthers quarterback Cam Newton was still pressured on nine of his 19 drop-backs (47.3 percent) on Friday night, and averaged just 2.9 yards per attempt while under pressure.

Leading the way in the pressures department was defensive end Geneo Grissom, but it was defensive tackle Adam Butler that flashed some serious pass rush skills.

Butler flushed Newton out of the pocket after a lethal shoulder slap move on center Ryan Kalil eventually taking Kalil to the ground, and showed off that exceptional burst on a stunt later on in the game although he was flagged for a low hit on the quarterback.

Butler continues to impress throughout the preseason as an interior pass rusher.

Valentine is a massive human being that can push the pocket and got to the Panthers quarterbacks with a mean bull rush.

Finally, check out rookie cornerback J.C. Jackson leading the team with three run stops. Jackson had a solid showing as he fights for a roster spot.

Gilmore allowed a team-high 67 yards into his coverage, and was spun around on a 28-yard reception by Panthers speedster Curtis Samuel.

Despite an excellent training camp, Gilmore has struggled through three preseason games, but let’s wait until the regular season starts before we hit the panic button with Gilmore.

On a positive note, rookie corner J.C. Jackson also showed out in coverage on top of adding three run stops as noted above.

Jackson made a great play on a screen pass to anticipate the route and make the tackle behind the line of scrimmage, and prevented a reception on another target by tackling the wide receiver as soon as the ball arrived.

Jackson, and rookie Keion Crossen who led the team with two pass breakups, could push veteran Jason McCourty off the roster as the two have shown adequate coverage skills and are contributing in the kicking game as well.

Lastly, Patriots linebackers Kyle Van Noy, Elandon Roberts and Ja’Whaun Bentley all held up well in coverage against a team that typically stresses the linebacker position in the passing game.

The trio only allowed 15 yards combined into their coverage, but most importantly, they only allowed a combined four yards after the catch.

It’s early, but the top-end of the Patriots’ depth chart at linebacker has improved in coverage from a year ago with Bentley leading the way.