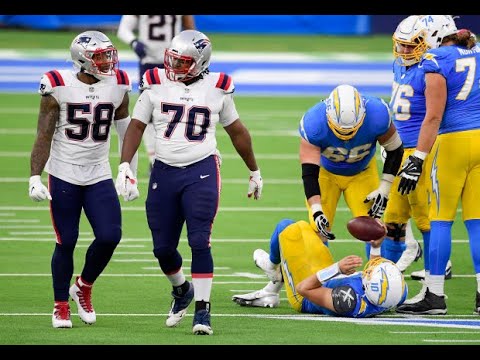 Below are various advanced stats from the Patriots’ 45-0 victory over the Chargers in Week 13.

As much as Newton’s 69 passing yards on 19 pass attempts continued a troubling trend, the Patriots quarterback more or less did what was asked of him in Sunday’s win.

As I wrote in my ten things, Newton had a significant role in New England’s run game script and was more accurate throwing the ball when the opportunities presented themselves than last week.

Along with his contributions in the designed running game, Newton showed signs of improvement against the blitz and with sensing pressure in the pocket.

Here, the Chargers ran a five-man pressure with a player dropping off the line that was replaced in the rush by the off-ball linebacker. Pats wideout Damiere Byrd does an excellent job of recognizing the blitz and makes himself available quickly for the quarterback, and Newton delivers the pass with an unblocked rusher in his face.

Although those are signs of improvement, Newton and the Pats’ passing game is still having issues with timing, which also speaks to a razor-thin margin of error for this passing offense.

In this play, Byrd blows by Chargers corner Michael Davis on a stutter-and-go. Cam knows Byrd is behind the defense, but Bosa’s pressure forces Newton to slide up in the pocket and then throw. If Newton gets the ball out sooner, it’s likely a touchdown, but those are the little things that are throwing off the timing of New England’s passing attack.

With Newton only throwing the ball 19 times, every little missed opportunity is exacerbated. Every off-target throw, blown protection, or drop by a receiver becomes a talking point about Newton’s inability to lead a productive passing attack.

The former MVPs lone pass attempt of 20-plus yards was the deep ball to Byrd, and Newton only attempted six passes over ten yards. Whether that’s an indictment on Cam, game-plan related like avoiding Joey Bosa, or other unknown factors, McDaniels hasn’t opened it up the last two weeks.

Still, marginal improvements by both Newton and those around him will make things look better.

Although it was a small sample size, Newton was only under pressure on five of his 23 drop-backs, or 21.7 percent, against a good LA pass rush.

After a dominant three-sack performance in Week 12, the Patriots held Joey Bosa to just one quarterback hit and three hurries, which is a win while facing a player of his caliber.

Bosa was the only Charger to register a quarterback hit, and Cam got some help from running back James White on his longest throw of the day, a 15-yarder to Jakobi Meyers.

In the play, the Chargers ran a simulated pressure by lining up three players over the left side. One of those defenders drops off into coverage, and the off-ball linebacker blitzes and James White delivers some teach-tape on how to pick up a blitz. White steps to the blitzer and keeps his pads down, then sits back to absorb the blow. White’s blitz pickup gives Cam time to find Meyers on a “burst” corner route downfield.

#Patriots film: love a good FB wham. Jakob Johnson takes one for the team, but look at the blocking by Andrews/Mason/Onwenu. Onwenu drives and turns no. 99 out of the hole. Textbook climbs by Mason and Andrews. Mason's footwork is tremendous. pic.twitter.com/LEq6sc372k

The Patriots also got significant contributions from the offensive line and fullback Jakob Johnson in the running game, which led to a 47 percent success rate on the ground.

In many ways, New England’s offense runs through their stellar offensive line.

The Patriots’ separation metrics from Sunday’s win are a great example of why the current NextGen formula is flawed.

Currently, the chips in the shoulder pads don’t account for lacking separation due to things out of the receivers’ control.

For example, Byrd’s deep ball registers as a “tight window” throw because the ball was late, but the Pats wideout ran a great route and created plenty of separation.

Similarly, Meyers’s catch on the “burst” corner route above was another play where a Pats wideout created separation, but the ball took him to the turf rather than leading Meyers upfield.

As was the case last week, New England’s receivers appeared to create opportunities to complete passes down the field, but those plays just didn’t come to fruition consistently.

The Pats’ pass rush had itself a day against a crappy Chargers offensive line that couldn’t pass off a simple line stunt. Nonetheless, it was an outstanding performance by New England’s pass rushers.

The Patriots pressured Chargers quarterback Justin Herbert on 33.9% of his drop-backs and tallied 25 total disruptions, despite only blitzing Herbert on five of his 56 drop-backs.

Leading the way for the Patriots once again was defensive tackle Adam Butler, whose team-high five quarterback pressures led to several opportunities for his teammates as well.

Here was New England’s go-to pressure scheme. The Pats put five rushers on the line of scrimmage to get one-on-one matchups. Adrian Phillips drops into coverage to make it a four-man rush, but Butler’s interior penetration on the center and Phillips’s pre-snap alignment opens a path to the quarterback for Chase Winovich to apply pressure on Herbert.

Butler also got a sack of his own on another T/E stunt with Anfernee Jennings. This time, Butler uses excellent technique as the penetrator to occupy two blockers initially. When the left guard falls off to pick up Jennings, Chargers left tackle Storm Norton can’t hold up against Butler.

The Patriots also saw flashes of productive rushes from rookie Josh Uche, who toasted Norton on a punch-dip move off a similar four-man rush design as the first play in the section.

With New England’s ability to play lockdown coverage in the secondary, their defense becomes dominant when the pass rush is getting home.

Along with a strong pass rush, the Pats also got some great plays out of their run defense after the Chargers found success early on the ground.

Lawrence Guy and Ja’Whaun Bentley were productive once again in the middle of New England’s defense, and the Pats D-Line is improving.

Here, Guy occupies both blockers in the play-side combination block, keeping Bentley clean at the second level to make the stop.

The Patriots’ defensive line has consistently kept the second-level clean over the last month or so, leading to a noticeable turnaround against the run.

New England’s coverage plan will come into focus once we see the coaches tape, but viewing the TV copy, their pass coverage is noticeably improving between the numbers.

Plus, top cornerbacks Stephon Gilmore and JC Jackson are shutting things down on the outside, holding Keenan Allen and Mike Williams to 34 yards on six targets.

As far as the middle of the field coverage goes, the Pats got an excellent rep by both Chase Winovich and Josh Uche on Wino’s interception. In the play, the Chargers ran a bootleg concept with double-outs at different levels. Uche recognizes the route combination, takes away the play-side options, and then Winovich makes an excellent read on the backside to pick it off.

Along with Winovich and Uche, Pats linebacker Terez Hall was competitive in coverage and had two pass breakups as a zone-dropper between the numbers.

Here, the Patriots fall into a cover-two structure, and Hall reads the quarterback to let the flat route go and fall underneath the vertical route up the seam.

New England’s coverage between the numbers and off play-action allowed a league-worst eight yards per attempt entering Week 13, but they tightened up in that regard on Sunday.