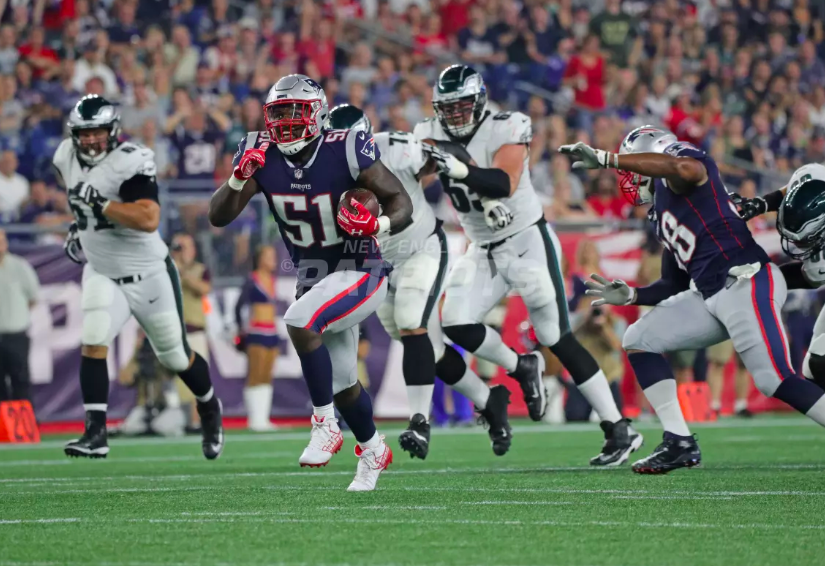 Below are a variety of advanced stats from the Patriots’ 37-20 win over the Eagles on Thursday night.

The return of the GOAT saw a vintage passing chart from the NFL’s MVP as he was sharp as ever on Thursday night.

Brady wasn’t able to complete the long ball, going 0-3 on passes of 20-plus yards in the air, but was 19 of 21 for all 172 yards and both touchdown passes were on throws under 20 yards downfield.

Although Brady’s accuracy was on point, he did struggle by his standards when facing pressure in his first game action since the Super Bowl in February.

The five-time Super Bowl champion was just three for nine on pass attempts under duress, although his touchdown pass to Chris Hogan did come under pressure.

Brady’s time to throw against the Eagles was a blistering 2.38 seconds, but some of that, and his stats under pressure, are skewed as the Pats quarterback played it safe in the preseason.

Overall, the ageless wonder was in regular season form on Thursday night.

Another week, another strong performance for the Patriots’ starting offensive line in pass protection.

As we know from last year’s Super Bowl, the Eagles pass rush is one of the NFL’s best, and they didn’t touch Brady as a result of a blown block on any of his 26 drop-backs.

Right guard Shaq Mason had some trouble allowing three hurries in the interior of the Patriots’ offensive line, and Trent Brown allowed two hurries off the edge and wasn’t as good as last week, but the other three members of the starting offensive line were clean.

Mason struggled once again against the interior pass rushers of the Eagles, most notably Fletcher Cox, but Brady was able to move around in the pocket to avoid taking any big hits.

Patriots first-round pick Isaiah Wynn had a good, not great, performance in his NFL debut before suffering a season-ending Achilles injury. He did allow a hurry in six snaps in pass protection, but that was on a bull rush and can be considered delayed pressure. In all, Wynn’s pass sets were solid as they were at Georgia which is unfortunate given the injury.

The starting offensive line is still trying to mesh in the run game as they incorporate Trent Brown and now LaAdrian Waddle at right tackle, but this unit is already showing that they’ve improved in pass protection.

The non-Brady story of the night was without a doubt the Patriots’ pass rush, which produced one of the best games they’ve had in a very long time.

The Patriots pressured the Eagles’ quarterbacks on 54% of their dropbacks, and got “quick” pressure (pressure in 2.5 secs or less), on a ridiculous 42% of those pressures.

Leading the way for the Pats was second-year defensive end Derek Rivers, who rebounded after a shaky performance last week to pace the team with seven total pressures. Rivers’ traits are apparent, and Thursday night he started to incorporate multiple pass rush moves into his arsenal, a welcomed sight after he bull rushed with his head down snap after snap against Washington.

Another surprise standout on Thursday night was second-year defensive Keionta Davis, who got the start with Trey Flowers taking the night off, leading the team in defensive snaps (55) and sacks (two).

Davis was on the NFI list all of last season but flashed a strong bull rush and a decent first step. On his conference call with reporters Friday morning, head coach Bill Belichick said that Davis would have been drafted in the 2017 draft if it wasn’t for a neck injury in college.

Combine Rivers with newcomer Adrian Clayborn, and a surprise breakout player such as Davis or rookie Trent Harris (five total pressure), and the Patriots’ pass rush looks significantly better than last season in the early going.

On the same conference call Friday Morning, Belichick opened by discussing the marriage between the pass rush and coverage, and the head coach was less than pleased about the 316 passing yards the Patriots’ defense allowed on Thursday night.

On the one hand, the stats looked solid for the Patriots’ top three cornerbacks, as Stephon Gilmore, Eric Rowe, and Jason McCourty only allowed a combined 19 yards into their coverage on six targets.

However, the depth corners on the Patriots struggled mightily, and the numbers make it look better than it was.

Rookie cornerback Keion Crossen ended up allowing a respectable 41 yards into his coverage on a team-high seven targets, but Crossen was flagged three times for an additional 54 yards in penalties.

Fellow rookie corner J.C. Jackson was then beat on a 57-yard pass by Eagles third-string quarterback Nate Sudfeld to wide receiver Shelton Gibson, who torched the Patriots secondary for 90 yards and a touchdown on Thursday night.

The top half of the Patriots’ cornerback depth chart looks solid with Stephon Gilmore leading the way as the #1 and either Eric Rowe or Jason McCourty manning the other side.

But the Patriots will need either rookie Duke Dawson or cornerback Jonathan Jones to step up in a big way to solidify the depth at the position and most likely man the slot, an area of weakness for the Pats a year ago.