The Patriots' pass rush turned up the heat on Sunday. 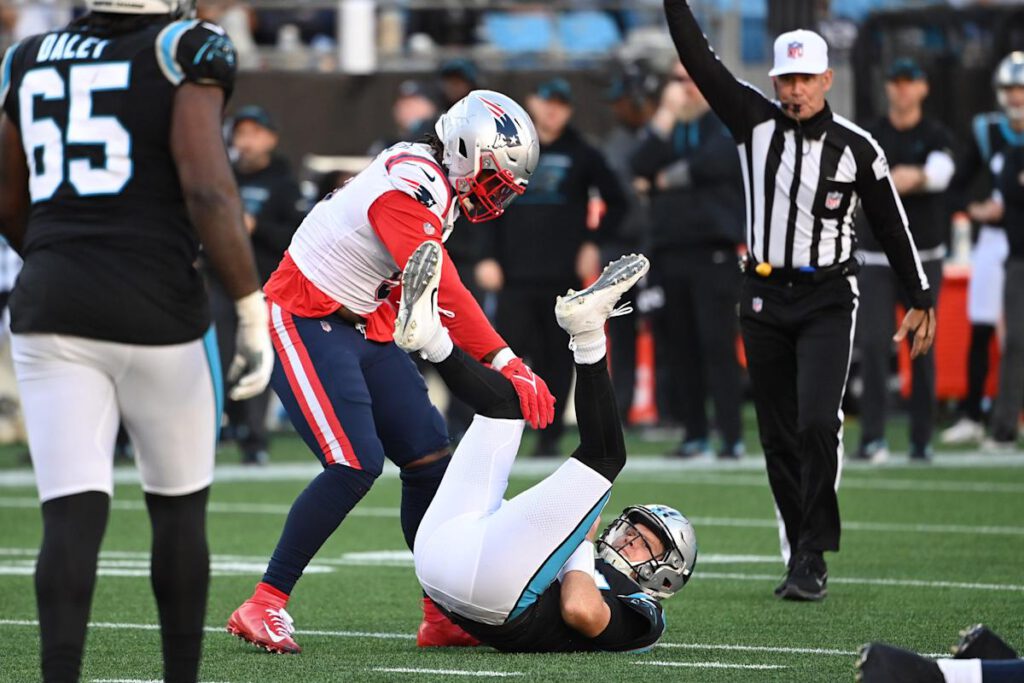 Behind a stellar defensive performance, the Patriots won their third consecutive game by defeating the Panthers 24-6 on Sunday.

New England pressured Carolina quarterback Sam Darnold on a season-high 51.4% of his drop-backs, leading to three interceptions and three other passes batted down at the line.

Here are a variety of advanced stats from the Patriots win over the Panthers in Week 9:

Rookie quarterback Mac Jones and the Patriots’ passing attack is in a slump, and in terms of downfield accuracy, Jones’s completion rate over expected is in a three-week downturn.

Over the last three games, Jones’s CPOE dropped to -4.6, 27th out of 34 qualified QBs, after he was eighth among all quarterbacks in the metric through the first six weeks of the season (+5.8).

Many factors could contribute to a drastic swing for Mac as a downfield passer, from crediting the defense to timing and pressure to receiver separation.

And the flashes are still there, like on a big-time throw to running back Brandon Bolden. Bolden ran a wheel route on linebacker Shaq Thompson, and Jones put it on him for 28 yards.

The Patriots also had a 43 percent success rate on third-down pass plays against an excellent third-down pass defense, with Jones finding Hunter Henry to beat a blitz here.

New England’s passing struggles are coming at a good time with the defense and running game finding a rhythm over the last few weeks. But, eventually, they’ll need more out of Mac.

Jones mostly helped the offense’s productivity by having a 2.36-second average time to throw, which contributed to keeping him clean on 75% of his drop-backs.

Finally settling on their current starting five, Mac has only been under pressure on 22.4% of his drop-backs (third-best), and the Pats O-Line ranks second in pass-blocking efficiency (91.7) since Week 7.

As Patriots head coach Bill Belichick said on Monday, there are things to clean up with the offensive line in terms of penalties (two), and Carolina made it tough with post-snap movement.

But Belichick credited the group for hanging in there against a disruptive defensive front, and the metrics suggest that New England’s offensive line is better than the narratives currently say.

The Patriots have a formidable duo in free-agent addition Matthew Judon and rookie Christian Barmore, allowing the Pats to spin the dial in coverage without blitzing an excessive amount.

New England’s front seven pressured Panthers quarterback Sam Darnold on 51.4% of his drop-backs, a season-high, and did so while only blitzing on 27% of Carolina’s 37 pass plays.

Carolina tried moving the pocket several times to get Darnold easier downfield reads on the move where he’s most comfortable attacking deep with the football.

However, he was hurried on several plays into mistakes by Judon, Barmore, and co. Such as on J.C. Jackson’s pick-six when Barmore and Judon were right in his face as he threw the ball.

Plus, Barmore saved two big plays by collapsing the pocket and getting his hands into passing lanes with two batted passes at the line of scrimmage, including the one here that likely saved a touchdown to running back Christian McCaffrey.

In their last two wins, the Pats combined to pressure Darnold and Chargers quarterback Justin Herbert on 46.2% of their drop-backs, which undoubtedly aided the back-end coverage.

Furthermore, New England also held the Panthers to a 30% success rate on first and second down and held them to 3.4 yards per rush, creating more obvious passing situations.

The Patriots’ defense is winning in the trenches, and that has to make Bill Belichick happy.

Although Belichick downplayed the transition to CLNS Media in his Monday morning press conference, the Patriots once again mainly were in zone coverage against Carolina.

“Those decisions are game-planned based. As the game declares, it goes in one direction or the other,” Belichick told me. “Steve [Belichick] does a good job of mixing up — man, zone, pressure.”

Belichick then went on to say the Patriots feel comfortable calling either man or zone coverages, but once again, 86.8% of Sam Darnold’s pass attempts were against zone coverage on Sunday.

New England’s execution in zone is improving, and they’re able to hide lesser man-coverage talent in their cornerback group by playing mostly cover-three against the Panthers.

Here, Darnold reads off-coverage on the outside and wants to throw a deep curl to D.J. Moore at the top of the screen. However, safety Kyle Dugger drops off the line and into the passing window as a hook/curl defender, forcing Darnold to hold the ball in the pocket.

The Patriots’ zone coverage will play out like man on the outside when receivers run vertical routes, and it does stress linebackers in zone-drops on running backs out of the backfield.

But this is a classic Belichick move to adapt to his personnel by recognizing that the Patriots no longer have the cover talent to man up on good skill groups as they have in years past.

The adjustment is more zone coverage, allowing their versatility and J.C. Jackson’s ball-hawking abilities to take over games. For now, it’s working.

Also, let’s just take a second to admire what a ridiculous interception this was by Pats linebacker Jamie Collins. One of those plays where when it happens to you in Madden, you scream that something like that only occurs in video games, and shut off the XBox out of anger. But it happened in real life.