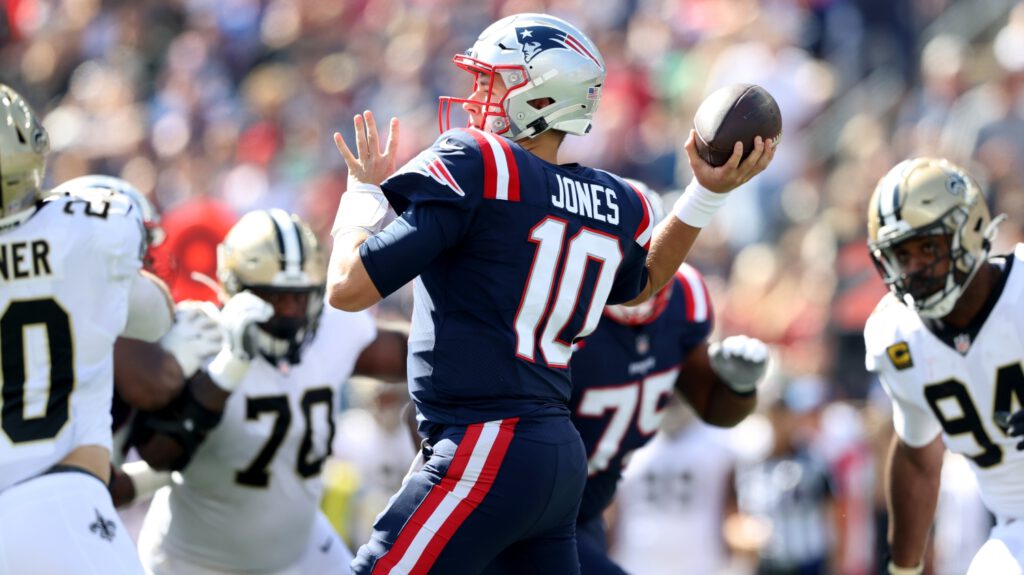 Below are various advanced stats from the Patriots’ 28-13 loss to the Saints in Week 3.

Patriots rookie quarterback Mac Jones falls in the middle of the pack in the advanced metrics through the first three weeks of his NFL metric, which is good for a first-year player.

Out of 34 qualified quarterbacks, Mac ranks 22nd in ESPN’s QBR metric and 16th in completion percentage over expected. Mac’s QBR is 52.3, which means he’s doing enough to win.

Jones’s passing grade (71.7 out of 100) and adjusted completion rate (72.7) were solid from clean pockets in Sunday’s loss. As you would expect, the pressure affected his performance.

Another trend forming in the first three games is Jones’s comfortability out of the shotgun, which isn’t surprising given that most of his drop-backs were from the gun at Alabama.

When the Pats put Mac in the gun, spread the field, and keep him relatively clean, he’s dealing.

Here, the Saints bring a blitz on third down from the second level, leaving tight end Hunter Henry in a matchup with safety P.J. Williams. The O-Line survives the rep against the blitz, Henry runs a good route, and Jones hits him in rhythm to move the chains.

In this play, the Pats ran play-action from the gun. They send Nelson Agholor and Kendrick Bourne up the field to occupy the deep safety while Jakobi Meyers crosses from the other side of the formation. Mac hangs in the pocket and delivers an accurate pass into tight coverage.

The Patriots’ rookie is still working on getting the team into the correct plays at the line of scrimmage and when to give up on a play.

But in the very early stages of his NFL career, Jones is far from the offense’s biggest problem.

Patriots head coach Bill Belichick sugarcoated the performance by the offensive line a little bit when he said, “overall, I wouldn’t say it was bad,” in his Monday morning press conference.

Belichick noted that the Pats dropped back 56 times, which invites more protection breakdowns.

In fairness to Belichick’s remarks, New England’s offensive line has underperformed relative to expectations but is more a middling unit than a bottom-tier group at this stage of the season.

The Patriots are 17th in PFF’s pass-blocking efficiency metric through three games, and Jones’s pressure rate is 15th among 33 qualified quarterbacks (31.8%), so middle of the pack.

On Sunday, the Patriots once again struggled with schemed pressures by the Saints. Above, the Saints bring a five-man pressure with an interior stunt on the right guard and center. Mac feels the rush on his edges, Andrews and Mason fail to pass off the stunt, and Jones steps up into more pressure, leading to an interception.

Starting right tackle Trent Brown could return as soon as Week 4, which will negate the issues at right tackle, but the Patriots need to get on the same page picking up blitzes and stunts.

Although the competition will improve, the Patriots’ defense is a top-ten unit through three weeks.

New England is currently eighth in expected points added per play allowed and sixth in drop-back EPA, while also ranking in the top ten of Football Outsiders’ DVOA metric.

Furthermore, free-agent addition Matt Judon and second-rounder Christian Barmore are fitting right into the system. With issues incorporating new faces on offense, the defensive pieces are coming together.

Judon had a team-high four quarterback pressures and three sacks, with the Pats’ defense pressuring Jameis Winston on 42.3% of his drop-backs in Sunday’s loss.

Barmore is also contributing as an interior pass-rusher, logging three hurries against New Orleans. Above, he wraps around an inside rush by linebacker Kyle Van Noy to hurry Winston out of the pocket on a third-down stop.

The Patriots would probably like to see Barmore convert more of his pressures into sacks, but that’ll come once he gets used to the elusiveness of NFL quarterbacks in the pocket.

Although the defense was good on the whole, New England failed to stop the Saints on their fourth-quarter touchdown drive once the offense pulled the Pats within one score.

Again, it’s tough to rag on the defense too much, but when they needed a stop, they didn’t get it.

The back-breaker was a third-and-7 from the Saints’ 28-yard line. The Pats had a chance to force a three-and-out, but their four-man rush didn’t get home, which gave Winston plenty of time in the pocket to connect with Deonte Harris to move the chains. Judon had a one-on-one with the left tackle and may have gotten held but didn’t win the rep regardless.

On Monday morning, we asked Belichick why the Patriots opted to rush only four defenders at Winston, who came into Sunday’s action as one of the worst QBs against the blitz in the league.

“New Orleans on third down, they had mixed in some protection. We pressured the first third down of the second drive (above), and they protected that and picked it up and ended up hitting it on the sideline on third-and-nine or third-and-10,” Belichick told CLNS Media.

“That’s something that we had done earlier that they handled pretty well. They ran a protection situation. Sean [Payton] does a pretty good job mixing that up, so I wasn’t that excited about running that again.”

Belichick’s explanation made sense based on the play he cited, but you still would like to see more urgency to get a stop there with the game on the line.

Wise opened the game with back-to-back stops, with New Orleans trying to establish the run. The Saints tried a weak side counter run on the second attempt, but Wise and Dont’a Hightower aggressively beat the pullers to the spot and forced Kamara to cut back into the defense.

Although the final drive wasn’t good, the Pats’ run defense held its own against Kamara and company.

New England’s pass defense continues to survive without Stephon Gilmore, but in critical situations, untimely breakdowns in the backend cost this group.

There is no better microcosm of these issues than newcomer Jalen Mills. Mills has allowed only four catches on 11 targets for 32 yards and zero touchdowns. But he was in coverage on Harris in the third-down conversion in the last section. Plus, the only catch he gave up against Miami in Week 1 was a 13-yarder on 1st-and-14 late in the game.

Like the rest of the Patriots’ secondary, Mills’s coverage metrics look good, but situationally, the group has breakdowns at inopportune times.

Mills isn’t the only Pats defender that falls into this category. On Alvin Kamara’s 11-yard touchdown, New England busted a coverage on 3rd-and-7 in the red zone. A stop there likely leads to a field goal rather than a touchdown. But nobody replaced Dont’a Hightower in the coverage when he blitzed, with Kyle Van Noy thinking someone was manned up on Kamara.

The Patriots will win more games if their defense continues to perform at the level, but New England needs to play better situational football on defense until the offense wakes up.