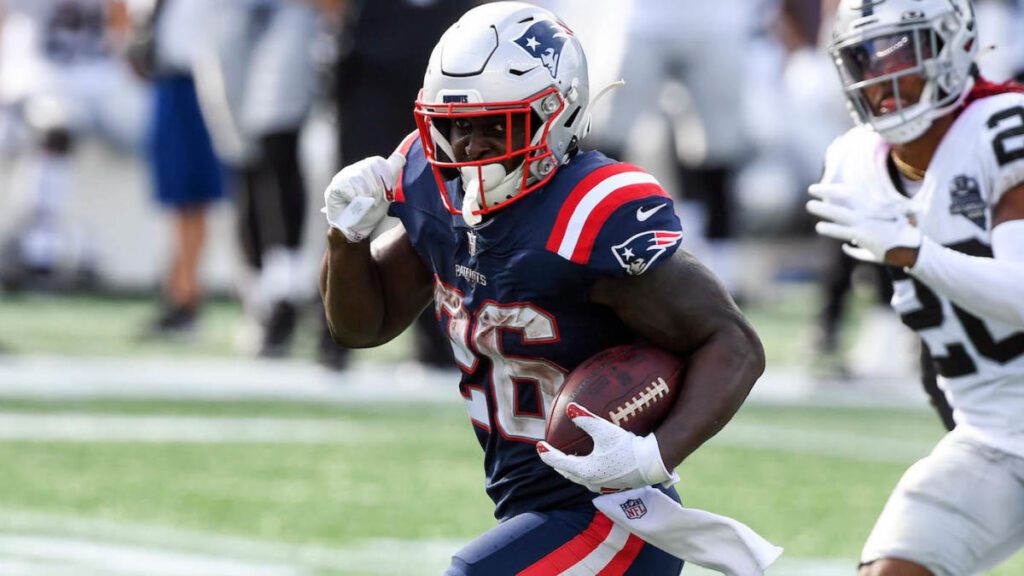 Below are a variety of advanced stats from the Patriots’ 36-20 win over the Raiders in Week 3.

Patriots quarterback Cam Newton had his worst performance out of his first three games in New England on Sunday against the Raiders.

Newton threw 19 “catchable” passes out of 28 attempts, good for 67.9 percent of his throws, but a far cry from his nearly 80 percent catchable rate in the first two games of the season, per PFF.

The Pats QB completed passes at a rate well-below expectation, with an actual completion percentage of 60.7 while CPOE says he should’ve completed 68.6 percent of his throws (-7.9).

Although there were examples of erratic ball placement, Newton’s struggles down the field, where he was just three-of-nine on throws of 10-plus yards, was more about poor decision making.

Newton threw two dangerous passes to Julian Edelman that nearly got intercepted and almost killed the Pats wideout. Then badly forced a throw on his interception. He also admitted to missing Damiere Byrd and Devin Asiasi for big plays downfield in his post-game presser.

Part of the equation with Newton is allowing him to be aggressive throwing into tight windows, but the 31-year-old needs to make better decisions with the football.

There will be games this season where very few receivers are open downfield based on New England’s personnel, and Newton needs to accept that and take what’s there.

Cam did check the ball down on several occasions with good coverage downfield and made some nice plays within the scheme to give the offense something through the air.

On his best throw of the day, the Pats ran their fake WR screen concept with N’Keal Harry and his lead blockers selling the bubble screen before those blockers released upfield. Newton sold the screen with a pump fake and then hit Byrd along the sideline for a 23-yard gain.

Newton’s release was once again on the slower side in the time to throw department, clocking in at 2.88 seconds. Some of that has to do with the vertical concepts New England is running with him at quarterback.

We’ll have to wait for the coaches film to see what exactly was going on with Newton and his receivers against the Raiders, but the passing game came back down to earth on Sunday.

The Pats offensive line overwhelmed an outmatched Raiders front once they started rolling after the first quarter, averaging 6.8 yards per play in the final three frames (2.7 in first quarter).

Newton was only under pressure on seven of his 31 drop-backs, or 22.6 percent, and through three weeks, he’s only facing pressure on 20 percent of his drop-backs (second-best in NFL).

Although they’ve faced three mediocre defensive fronts, the Pats offensive line is dominating their inferior opponents, which is what one would expect going up against bottom tier talent.

#Patriots film: play ends with a bad INT by Cam but watch Wynn and Onwenu on the left side. Great finish by Onwenu on no. 97 Maliek Collins. Pass protection ain't passive for the New England OL. pic.twitter.com/bmss0BndGq

In Sunday’s action, the standout for New England was rookie Michael Onwenu, who only allowed one hurry in 32 pass-blocking snaps. Onwenu was the highest-graded Pats offensive player with an 86.7 grade and looks like a sixth-round steal by Belichick in April’s draft.

Along with Onwenu, Joe Thuney pitched a shutout in his first-ever start at center, while left tackle Isaiah Wynn finally surrendered some pressure after two cleans sheets to start the year.

The lone sack on the offensive line came when Raiders pass rusher Maxx Crosby used a two-hand swipe move against Jermaine Eluemunor’s aggressive jump set. With the Pats running play-action, Eluemunor was trying to land a quick pitch, and Crosby was ready for it, swiping his hands out of the way to quickly turn the corner.

Overall, Eluemunor had an excellent day outside of the sack, grading out with an elite run-blocking grade of 92.1 in Sunday’s victory over Vegas.

Speaking of run blocking, when the Patriots rush for 251 yards as a team, the performance garners praise in the advanced stats report.

First, the blocking up front got the rushing attack rolling along with rookie running back J.J. Taylor. On the play above, the Pats get several great blocks from both their offensive linemen and receivers to get the edge for Taylor, who makes an excellent cut upfield to take advantage.

The Pats then incorporated one-back zone and zone lead to expose an aggressive Raiders front by ushering the defense out of the play using their one-gapping system against them to create cutback lanes.

New England’s running backs added to the blocking by averaging 3.2 yards per rush after contact along with eight avoided tackles, both terrific figures for the Pats RBs.

One of those runs that produced yards after contact was Sony Michel’s scamper on a split-zone scheme. Raiders safety Johnathan Abram shoots his gap to get into the backfield, but Michel eludes him and then makes an excellent cut off Shaq Mason’s block to churn out more yards.

The Pats got 122 of their 251 rushing yards after contact, a testament to the play of Sony Michel and the Pats running backs. Michel had 78 yards over expected on his 38 and 48-yard runs.

The Patriots only had three catches for 27 yards from receivers running routes out of the slot this week, but even on a slow day, Julian Edelman reminds us that he’s a terrific route runner.

On his 15-yard reception, Edelman ran his patented over route off play-action. The key to this particular play is Edelman’s re-stem once he gets inside the defense. He angles his release inside to attack the defenders’ leverage and then re-stems upfield before breaking on the crosser. The re-stem allows him to snap the route off, creating separation, and also makes the defender play through his body to get back into the play (stacking).

After a great week from their inside receivers against Seattle, the Patriots had a quiet day in the slot this week.

Chase Winovich led New England to a 33.3 pressure rate on Raiders quarterback Derek Carr, including two strip-sacks, with one resulting in a defensive touchdown.

Winovich, who is currently tied for 13th with 12 quarterback pressures through three games, is becoming one of the toughest edge rushers to block in all of football in his second season.

Raiders right tackle Denzelle Good learned the hard way that Winovich’s speed rush is a legit weapon. On his strip-sack, Winovich beats Good to his set point by bursting off the ball. Once he starts to turn the corner, Winovich shows excellent flexibility to dip underneath Good and then bend around the edge.

The 2019 third-round pick gives the Patriots a one-on-one pass rusher that can win his matchup each week beyond the scheme, and he got some help on Sunday from Deatrich Wise.

On New England’s defensive touchdown, Winovich’s speed rush once again forces Carr to step up, where Wise and Shilique Calhoun’s stunt gets home on the left side to collapse the pocket.

The Patriots needed a second-year leap out of Winovich, who is primarily replacing Kyle Van Noy in the defense, and they’re getting it and then some through the first three games of 2020.

Plus, Wise, whom Belichick credited during his Monday media availability for improvements to his game, mainly pad level, and power, is also becoming a disruptive player.

“We know he can rush the passer, but he’s done a good job of mixing in edge moves and rush techniques with some power and some more power-type rushes – long arms, things like that – so he’s got a good compliment and a good repertoire there where he’s got three or four different pitches he can throw,” Belichick said of Wise.

Although the pass rush was effective, New England’s defense is still getting gashed on the ground by opposing rushing attacks. This week, the Raiders averaged 5.7 yards per rush.

However, the Patriots will need to live with some of the yards they allow on the ground in favor of playing more defensive backs to stop the pass, a tradeoff they should be content making.

Still, there are too many reps where the second level is doing nothing to help out the defensive line. In the Pats’ two-gaping system, the defensive line is holding up blocks and taking on double-teams to keep the linebacker level clean. If those linebackers don’t come downhill to get those doubles off and make plays, there will be many runs like the one above.

Here’s an example of what the run defense should look like when the execution is sound. The Pats get great technique from Lawrence Guy, Adam Butler, and Shilique Calhoun to occupy the offensive line and reset the line of scrimmage. The play of the defensive line keeps safety, Adrian Phillips, clean, allowing him to read the running back and trigger downhill into the hole, where he makes the stop, and Calhoun punches the ball out.

The run defense is currently 24th in success rating through Sunday’s action, but it’s a tradeoff they’re making to be a more effective pass defense with defensive backs all over the field.

Waller was limited in practice with a knee injury, which could explain why Gruden ran the offense through slot receiver Hunter Renfrow, with rookie Henry Ruggs also out due to injury.

As a result, the numbers weren’t friendly to Pats slot corner Jonathan Jones, the primary defender in coverage on Renfrow for most of the day. Belichick and Jones both credited Gruden’s ability to create opportunistic situations for Renfrow with alignment, leading to a game-high 84 yards and a touchdown.

#Patriots film: perfect execution of "one-cross" vs Waller on 3rd down. DMac on left hash responsible for "cutting" crosser from trips side. Waller runs an over, Joejuan passes him to DMac, then replaces DMac as the "robber" in MOF, takes away 2nd option. Good bull rush by Wise. pic.twitter.com/uQC1zCSvh6

Although he wasn’t at 100 percent, the Patriots still did an excellent job on Waller, throwing several different coverages at him. The Pats played cover-1 man, zone match coverage, bracket coverage, and held him up at the line with aggressive jams.

The Raiders wanted to use Waller as a decoy knowing that Belichick would scheme him out of the game or were forced to due to injury. Either way, it was great team defense.

Patriots cornerback Stephon Gilmore committed another penalty in coverage, his third of the season, which is likely due to a lack of focus and some sloppy technique at times.

There’s no doubt that Gilmore’s play has dropped off from his Defensive Player of the Year campaign in 2019, but it’s still too early to hit the panic button. Plus, outside of the Metcalf touchdown last week, he’s allowed only five catches for 58 yards into his coverage.

Lastly, Patriots safety Devin McCourty was terrific in this one, often providing inside help on Waller or cutting him off coming across the field.

The Patriots secondary continues to make it difficult on opposing quarterbacks, even if everyone isn’t playing at their usual level.