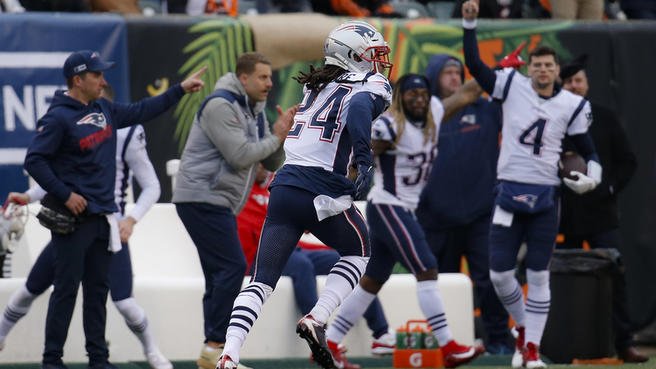 Below are a variety of advanced stats from New England’s 34-13 victory over the Bengals.

Brady’s performance against Cincinnati is becoming the new norm for the Pats quarterback.

Brady was on-target on 19 of his 29 throws, including two intentional throwaways, according to mine and Pro Football Focus’s charting of the game.

According to Pro Football Focus, Brady averages 4.6 off-target throws per game, so eight erratic throws was worse than usual.

The future Hall of Famer received a 66.2 out of 100 game-grade from PFF, which falls in line with his performance over the last ten games.

Since Week 5, Brady’s PFF grade is hovering at 70.2, an average NFL quarterback.

There are several reasons for Brady’s decline, and tons of those are outside of his control; as I said last week, he remains the least of my worries offensively, but we still need to be objective.

On the tape, two throws concern me the most as it pertains to Brady’s downfield ball placement, and both misses took touchdowns off the board for New England.

With that said, it’s worth mentioning that Brady’s right elbow injury is playing a role in his physical setbacks on the field, so maybe that’s behind the accuracy issues on Sunday.

Let’s start with the second of two misses to an open Mohamed Sanu. The Pats send Julian Edelman in motion before the snap as eye candy to the defense. Off of the play fake, Sanu runs the seam against a cover-2 zone defense. The safety bites on the fake, and Sanu gets behind him, but Brady sails the throw. That should’ve been six.

Here’s another errant throw that took a touchdown off the board momentarily; Brady would find N’Keal Harry to punch it in two plays later. The Patriots break a tendency, throwing the ball for only the third time this season with Elandon Roberts at fullback, Off of the fake, Michel releases into the flat with Edelman holding up the boundary defender, he’s walking in for a touchdown. The throw from Brady is low and behind and Michel can’t adjust. If that’s an accurate ball from Brady, even if it slows Michel’s momentum a tad, it’s probably still six.

Brady’s release clocked in at 2.53 seconds on average, which is much faster than it’s been in recent weeks, and his fastest time to throw since Week 8; the ball was out on time.

Over the last few weeks, most of Brady’s issues stemmed from missing open receivers downfield, likely a result of chemistry issues with his pass-catchers.

Against the Bengals, at least based on the TV copy, it was mostly ball placement.

On initial viewing, it might’ve felt like the Patriots offensive line struggled to block the Cincinnati front in pass protection, but our review of the game told a different story.

Brady was only under pressure on nine of his 31 drop-backs, or 29 percent, and seven of those disruptions were on two players, one of which was tight end Matt LaCosse (three).

LaCosse and Cannon were both culprits on a third down play that stalled New England’s second drive. The Pats max protect, leaving seven in to block, and the rush still gets home. LaCosse gets beat easily by Bengals pass rusher Carl Lawson while Carlos Dunlap goes by Cannon on the other side.

Although those two struggled, the rest of the offensive line only surrendered two hurries, and both left tackle Isaiah Wynn and center Ted Karras had clean sheets.

On N’Keal Harry’s touchdown, the Pats perfectly blocked a four-man rush with five blockers. Wynn gets a chip from the back and holds up his man, Karras and Mason double Geno Atkins, and Karras sustains the block nicely, but it’s left guard Joe Thuney that stars. Thuney, with the other two interior guys doubling Geno, has Andrew Billings one-on-one. The Pats left guard gets into Billing’s chest with a quick punch, which Billings throws off, but Thuney reestablishes his hand placement and leverage to anchor, shutting down Billings. Brady has all day and finds Harry for the score.

The big uglies up front continue to be punching bags for the struggling offense, but they played well on Sunday afternoon.

Julian Edelman’s knee issue limited him significantly, so the Patriots didn’t have the same production in the slot this week.

The Pats put Edelman inside less, which led to some openings for other guys between the numbers. If teams continue to double Edelman, playing him on the boundary makes sense.

McDaniels also had some nice designs to get the Pats playmakers in space, including this double slant/flat concept that New England’s runs with some frequency. It’s not new, but effective. White comes in short motion out of the backfield while Edelman and Harry clear out the sideline with slants to the inside. White releases into the flat, and has the entire sideline for a 22-yard gain.

As we head towards January, it’ll be interesting to see if McDaniels continues to pick his spots some with Edelman in the slot, giving way to other options like Sanu, Harry, or the backs.

Turning over to the defense, the Patriots had a pedestrian day rushing Bengals quarterback Andy Dalton, but Dalton is also known for his quick release (2.52-second average on Sunday).

Dalton was under duress on the same 29 percent of his drop-backs as Brady, so not much, but it was once again Kyle Van Noy leading the way with five quarterback pressures.

Against the run, the Patriots lost plenty of battles against Joe Mixon, but they also won some bouts with the talented Bengals running back.

In a critical sequence in the second quarter, the Patriots stopped Mixon short on back-to-back short-yardage plays, leading to a turnover on downs. On the fourth-down stop, nose tackle Danny Shelton, who tied for a team-high with three-run stops, tosses Bengals left guard Michael Jordan to the side like a ragdoll and stops Mixon short, a truly dominant rep.

Along with Shelton, defensive tackle Adam Butler flashed some terrific short-area quickness on the inside to close on Mixon a few times when it looked like the Cincy back was about to break free.

Belichick called Mixon the best running back in the NFL after the game, which sounds like hyperbole, but the Pats head coach was extremely complimentary of Mixon all week.

The Patriots’ defensive backs dominated, holding Dalton to 4.9 yards per pass attempt and a 39.2 rating.

Dalton’s passer rating would’ve been higher if he spiked the ball on every play.

As we already know, All-Pro cornerback Stephon Gilmore and fellow stud JC Jackson were incredible, breaking up or intercepting more passes (7) than completions into their coverage (6).

Gilmore’s pick-six was a terrific highlight, but his first interception was better coverage from this perspective.

Gilmore gets moved out of position a little by a smooth release from Bengals wide receiver Tyler Boyd, but he’s able to catch up to Boyd at the top of the route and anticipates a curl back to the quarterback to undercut the route. He then makes a one-handed grab to pick the pass off with Boyd tackling him to the ground. Maybe he could play wide receiver?

As for Jackson, he’s tremendous at tracking the deep ball and forcing receivers into the sideline where they have less room to work.

On his second interception, Jackson gets his hands on Bengals speedster John Ross and escorts him into the boundary. He stays in his hip pocket up the sideline to remain in phase, allowing him to look back for the ball. At that point, Jackson becomes the intended target, and he smoothly runs underneath the deep ball from Dalton for the interception.

With Jonathan Jones handling the slot and Jason McCourty in the mix when healthy, the Patriots have the best cornerback group in the league, and it’s not particularly close.