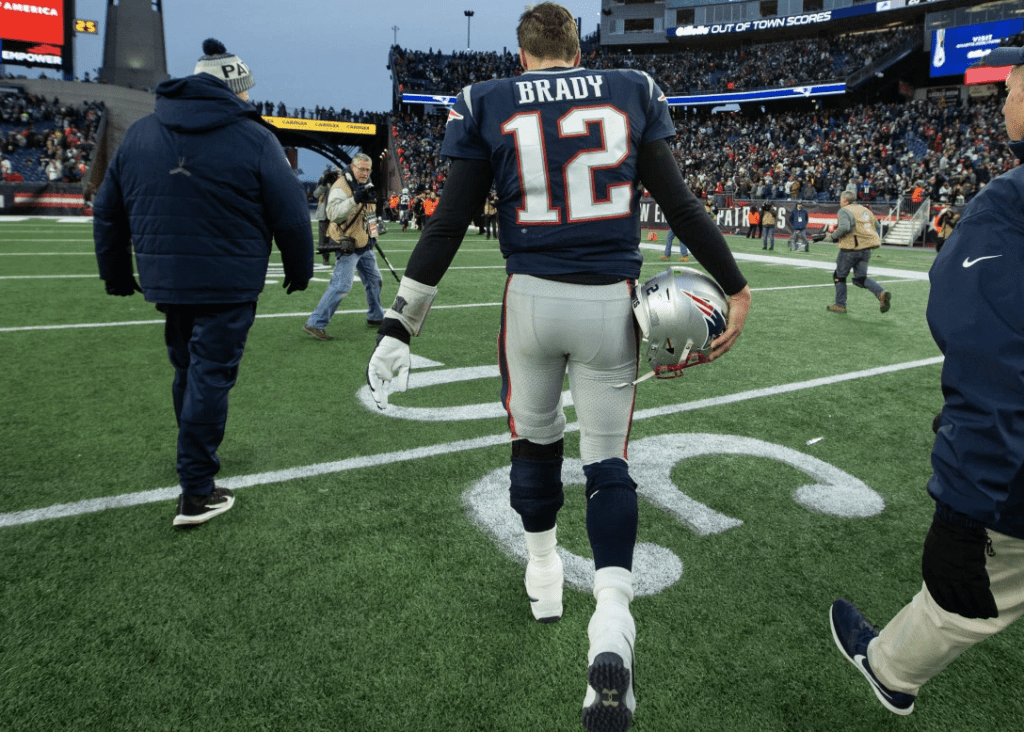 Here are some advanced stats from the Patriots 27-24 loss to the Miami Dolphins in Week 17.

To cap off a disappointing year, Patriots quarterback Tom Brady had arguably his worst performance of the season in Sunday’s stunning loss to Miami.

According to Pro Football Focus, Brady’s 38.5 game-grade and 58.6 adjusted completion percentage against the Dolphins were both season lows for the six-time Super Bowl champ.

And after reviewing the television copy, my charting docked Brady for ten poor throws, including nine errant passes and a pick-six.

Brady found a bit of a rhythm in the second half, but the Patriots left points on the board in the first two quarters due to his accuracy issues. He sailed to throws over the heads of open receivers down by the goal line in the second quarter. Brady’s poor throws were mostly over the heads of his receivers. He wasn’t getting through his delivery in the first half, causing the ball to leave his hand early, and his feet could’ve been further apart on some throws too.

There’s no way of knowing, but Brady may be making up for his injured elbow by trying to generate torque from his core to get more heat on the ball.

On a positive note, he made two throws that suggest he’s physically capable of playing at a Brady-like level moving forward.

First, a 50-yard deep bomb to Phillip Dorsett, with pressure in his face, he drops it in there before the safety can come over to help.

Later on, Brady fired a drive throw over the middle of the field to Mohamed Sanu. The Dolphins rush three, and Brady has all day, giving Sanu time to work himself open.

The three-man rushes were a theme of the day for the Miami defense, forcing Brady to hold the ball for 2.78 seconds, his second-longest time to release of the season behind only Week 13.

Flores only blitzed Brady six times, choosing to drop seven or even eight defenders into coverage. Brady was well-protected but still had to hang onto the ball for longer than usual.

With the Titans coming to town on Saturday, we’ll see how he handles a game plan against his former teammate in head coach Mike Vrabel.

The offensive line deserves credit for a good performance. Brady was only under pressure on five of his 30 drop-backs, but the Dolphins rarely blitzed.

Miami sent mostly three or four-man rushes, electing to play coverage against Brady, only blitzing him six times in the win.

The Pats OL allowed only two pressures the entire game, both on right tackle Marcus Cannon, with the other four blockers up front pitching shutouts.

Thuney finished the regular season as the fifth-ranked guard in all football in overall grade (77.4), and was third with a borderline elite pass-blocking grade of 87.4.

Wow. The @Patriots needed it and they go it. Is this the play that saves their 2 seed? McDaniels dialed up a gem and man did the Pats execute. Plays totally made by the LG. @MikeGiardi @RochieWBZ @patspulpit @BenVolin pic.twitter.com/bbe0fPPHpO

Thuney also paved the way nicely on James White’s go-ahead touchdown in the fourth quarter. The Pats got key blocks from  him and right guard Shaq Mason on a well-designed screen pass by offensive coordinator Josh McDaniels.

And on the ground, New England leaned heavily on their power concepts, pulling guards and lead plays with fullback Elandon Roberts on the field.

Over the last three weeks, the Patriots are second in the league in positive expected points added runs.

They’re getting good production out of the ball carriers too in that span, averaging 3.7 yards per rush after contact, a significant improvement from the 2.0-mark in the first 13 games.

On his Monday conference call, McDaniels, who has the benefit of watching coaches film immediately unlike you and me, said Miami doubled Julian Edelman most of the day.

Watching live, there were definitely plays that stand out where the Dolphins defense bracketed Edelman when he in the slot, which is becoming common for every opponent.

Edelman ran 19 routes out of the slot, only catching three passes for 26 yards. Unfortunately, positioning him inside where he is at his best makes it easier for the defense to double Edelman out of the game. Teams can use a linebacker or safety from the middle of the field to close Edelman in with a corner playing outside leverage, creating an inside-out bracket.

To get him away from the doubles, the Pats are moving him outside more often, which is where he ran his other 14 routes, and the Pats are calling plays to expose defenses for doubling him.

On Phillip Dorsett’s 50-yard catch, the Pats motion Edelman from the outside into a stack. He then switches on the release with Dorsett, with Edelman releasing inside and Dorsett outside. The Dolphins are playing with a safety in the middle of the field, and the Pats know they can get him to stay there if they send Edelman on a post or crosser. With the safety away from Dorsett, he has single coverage on the outside with a lot of space from the slot.

The Titans will most likely double Edelman routinely on Saturday, and the best way to prevent them from doing so is by other players beating man-to-man coverage as Dorsett did there.

The Patriots generated a heavy pass rush on Dolphins quarterback Ryan Fitzpatrick, pressuring him on 40 percent of his dropbacks, but it didn’t lead to negative plays.

Fitzpatrick was Fitzmagic, throwing an accurate deep ball and dancing out of pressure with underrated elusiveness in the pocket. He’s slippery, and he’ll stand in there against the blitz to get the ball out.

The game plan was for linebackers Dont’a Hightower and Jamie Collins to play inside on the line of scrimmage as standup pass rushers. Collins rushed the passer on 21 of his 55 snaps, leading the team with five quarterback disruptions and a sack.

Although they brought extra rushers often this week, the Pats finished the season with the third-highest pressure rate when they don’t blitz at an impressive 39.8 percent, per PFF.

This isn’t a case of “they have to blitz because they can’t generate pressure without it” situation; the Patriots chose to blitz Fitzpatrick, and the plan backfired.

Against the run, the Patriots held Miami to 2.3 yards per rush on running back carries, with their only explosive runs coming from Fitzpatrick and one trick pass scramble by Isaiah Ford.

Strong seasons continued for defensive tackles Danny Shelton and Lawrence Guy, who helped plug up the middle for a quarter of Pats to log three run stops in the loss.

The Patriots will need their absolute best for the NFL’s leading rusher in the Titans’ Derrick Henry.

Without the benefit of coaches film, we won’t go as far as saying Sunday was the worst performance by the Pats secondary this season, but it’s going to be right up there.

Stephon Gilmore had his worst statistical game in a Patriots uniform, allowing seven catches for 119 yards all by Dolphins wideout DeVante Parker, his most in a game since Week 2, 2016.

Parker beat Gilmore on several vertical routes, including one of the biggest grabs in the game, a jump-ball from Fitzpatrick on Miami’s game-winning drive.

On a fourth-quarter field goal drive, the Pats sent one of their zero blitzes, and Fitzpatrick knew right away to throw the post/crosser to Parker in the middle of the field. With Gilmore in the slot and no deep safety, Fitzpatrick knows how Gilmore will drop, and goes right to Parker before the rush can get home.

The Patriots will also run zero blitzes where the safety in centerfield will drop down to take a receiver in man coverage so that a slot defender can blitz.

Either way, there’s space over the middle on the type of route that Parker runs, and the Miami coaching staff knew the vulnerabilities in the coverage.

My weekly film review will on some of the tendencies that opposing offenses are exposing in the Pats coverages.

The tape is out there now on the Pats defense, and every coverage has a weakness. With good execution, the offense will always win over the defense. Belichick will adjust.