The Patriots' rookie quarterback made the most of his opportunities. 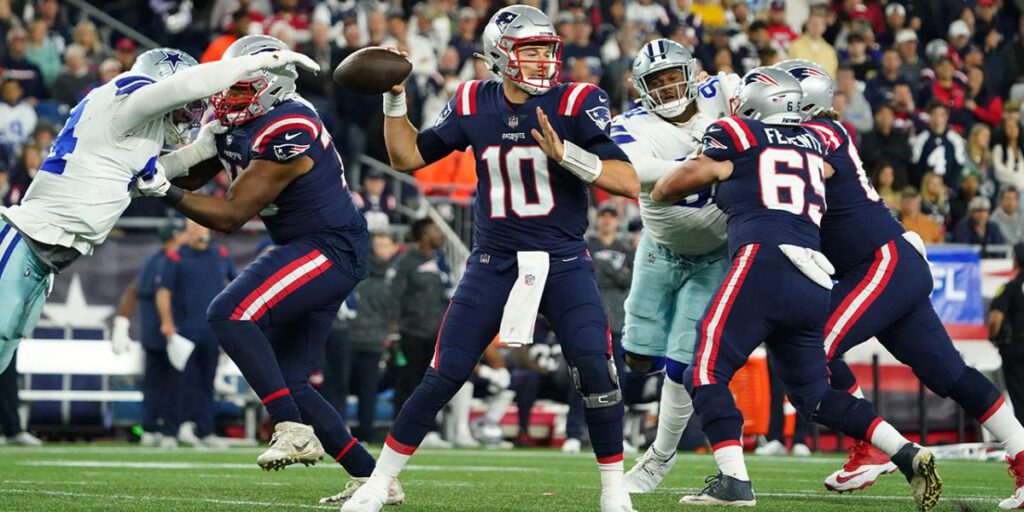 From a New England perspective, the Patriots’ overtime loss to the Dallas Cowboys had plenty of frustrating elements.

Cowboys quarterback Dak Prescott set a new high-mark against a Bill Belichick defense by throwing for 445 passing yards, which was made possible by the number of plays Dallas ran on offense and a lacking pass rush that only pressured Prescott on 26.9% of his 52 drop-backs.

Despite having success with it early on, the Patriots also went away from their two tight end sets that averaged 5.8 yards per play and two touchdowns in the first quarter. After the first quarter, the Pats only operated out of those packages on 35% of their offensive plays.

“When you go into a game with an alternative group, like the big people, it’s not like you go in there with like 25 plays. Sometimes the shelf life on that doesn’t last forever,” head coach Bill Belichick said.

Once again, the Patriots found things that worked against Dallas and nearly won the game. But “nearly” isn’t good enough in the NFL, and that’s why New England is now 2-4.

Below are various advanced stats from the Patriots’ loss to the Cowboys in Week 6:

The good news for the Patriots is that rookie Mac Jones had arguably his best performance of the season in the loss to the Cowboys.

Although Jones was partially at fault for the pick-six, it significantly altered his expected points output because he only dropped back to pass 23 times on Sunday night.

Sucks to see it happen in a losing effort but this was the best game of Mac Jones's NFL career to date: 92.7 @PFF passing grade, 10.9 YPA, +9.9 CPOE, three big-time throws, 4-for-4 on deep throws, 110.4 rating under pressure. Really strong performance by Mac. #Patriots

Excluding the pick-six, Jones added 0.18 expected points per drop-back and was very accurate once again with a completion percentage over expected of +9.9. On the season, Mac is seventh among 32 qualified quarterbacks in CPOE, which measures downfield accuracy (+6.1).

Furthermore, after having only four completions of 20-plus air yards in his first five NFL starts, Jones went four-for-four against Dallas on deep throws with two touchdowns.

On Kendrick Bourne’s 75-yard touchdown, Jones recognizes the safety rotation where the defender rallying to the deep middle is coming from the far hash out of the two-high pre-snap look. With Bourne working a double-move against Trevon Diggs, Mac knows he needs to get the ball there before the post safety arrives. The deep safety expects the ball to come outside the numbers, so he runs in that direction, but Jones throws it inside the safety to beat the coverage.

Another strong element to the game for Jones was his passing under pressure, where he averaged 10.5 yards per attempt with a PFF passing grade of 93.1.

Here, Pats wideout Nelson Agholor releases on a longer developing “burst” corner route where he sells the crosser and then breaks on the flag pattern. The protection breaks down as Jones loads up to pass, but despite throwing off his back foot, the Pats’ rookie gets enough on it to complete it for 27 yards to Agholor.

The Patriots have plenty of problems to fix on both sides of the ball. However, the rookie quarterback is not one of them.

Speaking of problems on offense, New England’s offensive line continues to have issues as the coaching staff searches for a healthy five-man combination playing good football.

RT IF YOU LOVE RANDY GREGORY

Despite only 23 drop-backs and an average time to throw of 2.24 seconds, Jones was still under pressure on 34.8% of his passing plays. Plus, it took Cowboys pass-rusher Randy Gregory 2.45 and 2.5 seconds on his two sacks to get to Jones. Good luck looking downfield there.

Ultimately, it will be challenging for the Patriots to get their downfield passing attack into a rhythm if Jones can’t let plays develop and the coaching staff can’t trust the line to hold up.

Time and time again, New England’s QB and receivers are creating downfield opportunities that they’re hitting when the protection is solid.

Unfortunately, that hasn’t happened often enough, and the Pats need a consistent five-man combination that they can stick with the rest of the season.

Moving over to the defensive side of the ball, the Pats defense didn’t get much help from the offense being out there for 92 plays in Sunday night’s loss (including penalties).

However, a trend is forming in recent weeks: a lack of pressure on opposing quarterbacks.

Some of these game plans have less blitzing than others but over the last three games here are the #Patriots' pressure rates on opposing QBs:

The league-average pressure rate is around 33-34%, per @PFF.

Still, Cowboys quarterback Dak Prescott was only under pressure on 26.9% of his drop-backs, and the lack of disruption on blitzes allowed Dak to shred the Patriots’ coverages in the backend. Plus, New England didn’t register a single sack on 52 drop-backs for Dak.

On the game-winning touchdown, the Patriots ran a zero blitz with no deep safeties. They somehow didn’t apply any pressure on Prescott despite sending all-out pressure, leaving cornerback Jalen Mills helpless on a deep over route by CeeDee Lamb.

New England’s secondary had its struggles against a talented group of skill players. Still, there were many instances where the coverage held up, but Prescott had all day to throw.

The best part of this game defensively for the Patriots is that they held Dallas’s potent rushing attack to 3.9 yards per rush and a negative EPA per play (-0.37).

By playing the game out of mostly post-safety structures, the Pats effectively used the extra defender in the box to stop the Cowboys on the ground, and it got Dallas into 13 third downs.

The plan was working through three quarters for the Patriots, but a lacking pass rush and the sheer volume of plays ran by the Cowboys’ offense broke the dam in the fourth quarter and OT.

When you surrender 445 passing yards and three touchdowns, it’s difficult to say that the Patriots’ coverage defenders had a good performance against the Cowboys.

Still, they were more competitive in man coverage against Dallas than zone coverage snaps, with Prescott lighting up New England’s zones.

Along with a much lower yards per attempt average, the Pats also forced six incompletions in man coverage compared to zero in zone structures. In other words, they won their fair share of reps in man but gave up an 80% completion rate and 11.4 yards per attempt in zone.

The Patriots are still a very good man coverage defense and should trust their secondary to play aggressive man coverage even against top-tier passing attacks like Dallas.