Mac Jones looked like the better QB on Sunday and the stats helped prove it. 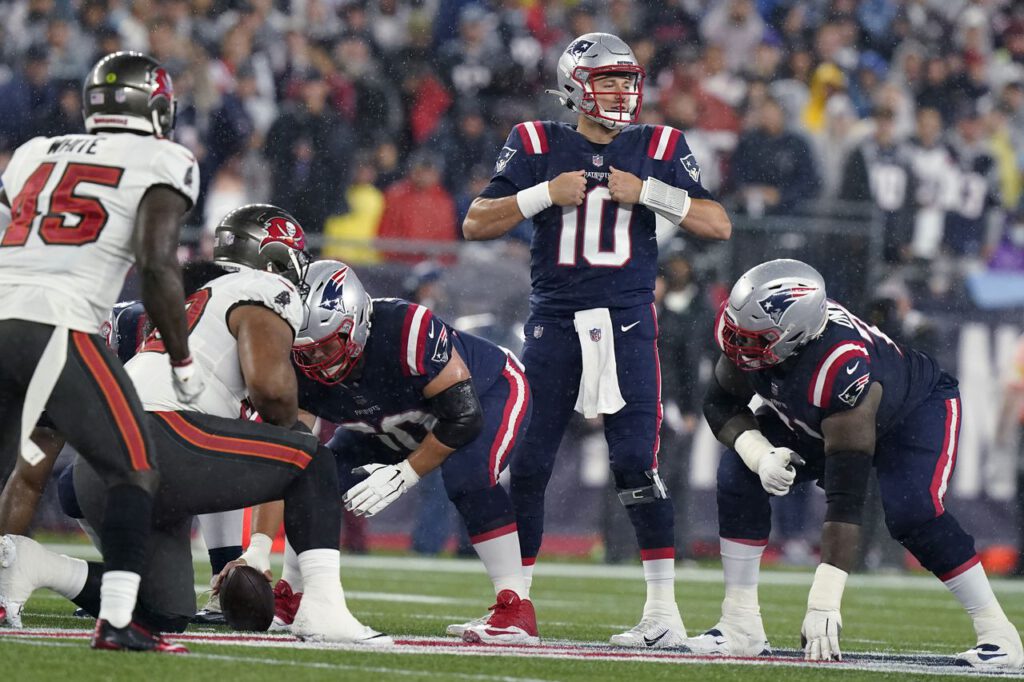 Tom Brady may have emerged victorious in his highly anticipated return to Foxboro as a member of the Tampa Bay Buccaneers, but he was not the best quarterback on the field on Sunday.

That honor belonged to his replacement and heir apparent Mac Jones who stood tall in the face of constant pressure to deliver his best game as a pro, albeit in a losing effort.

Here’s  are various advanced stats from the Patriots’ 19-17 loss to the Bucs in Week 4.

Although the Patriots’ rookie didn’t complete a pass over 20 yards, Mac Jones once again did enough to put his team in a position to win Sunday night’s showdown with Tom Brady.

The Pats’ first-rounder’s frustration is that he has now played winning football in two out of three of New England’s losses this season, yet his team is 1-3. That’s football.

Here, Jones shows excellent composure under pressure to side-step an unblocked rusher on a blitz, move the defense with his eyes by staring down the left side, and comes back to Kendrick Bourne’s dig route for a completion.

Mac also got the ball out quickly with an average time to throw of 2.3 seconds, and the strategy mostly worked as he picked apart the short and intermediate areas of Tampa Bay’s coverages.

If there’s a concern with Jones’s style of play at the moment, it’s that his average depth of target was once on the very low side at 5.2 yards. Mac only has four completions of 20-plus air yards on the season, which is tied for second-to-last among 25 qualified quarterbacks.

Jones was terrific on throws past the line of scrimmage that traveled under 20 yards against the Bucs: 24-for-30, 233 yards, 7.8 yards per attempt. But his one attempt of over 20 yards was intercepted.

The Pats have to wonder if the lack of explosive passing plays is a sustainable way to move the ball. Their offense is 28th in EPA per play through four weeks without big plays through the air.

Throwing downfield isn’t everything, and there’s something to be said for the risk involved in consistently passing downfield. Still, it isn’t easy to put up points without some semblance of a downfield passing game.

Arguably the biggest reason why the Pats’ offense is failing to hit on big plays is that the pass protection isn’t giving Jones enough time to throw downfield.

The Patriots’ rookie was pressured on a season-high 37.8% of his drop-backs against Tampa Bay, following a 35-plus percent pressure rate trend in New England’s losses this season.

If the Pats can’t keep Jones clean more often, they’re going to keep losing; it’s that simple. For a pocket passer, anything above 35% will make it very difficult to move the football consistently.

New England continues to have major issues at right tackle without starter Trent Brown, as Justin Herron and Yasir Durant were responsible for two sacks and five QB pressures.

On Jones’s interception, running back Brandon Bolden failed to pick up the blitzing linebacker, which led to a poor decision by Mac to throw the ball off his back foot while under pressure.

Later, the left side was the issue, with left Isaiah Wynn and left guard Ted Karras failing to pass off a stunt by Vita Vea and Joe Tryon, leading to a huge sack.

We say the same thing every week with this group: they don’t see it through the same set of eyes, causing breakdowns with schemed rushes that are killing the passing game.

The Patriots only pressured former quarterback Tom Brady on 22.2% of his drop-backs, but they executed their plan defensively to perfection.

Belichick’s strategy was to drop seven or sometimes even eight defenders into coverage to take away the middle of the field, forcing Brady to hold the ball and attack outside the numbers.

Although they didn’t bring extra defenders, the Pats got home some by running simulated pressures, where the defense threatens a blitz but backs off at the snap.

Here, New England forces Brady to slide the protection to his right to account for the blitz threats. The Pats end up backing off, but the slide right leaves Matt Judon unblocked.

Judon was the Patriots’ highest-graded defensive player in the loss, adding a sack to his four other QB pressures, two TFLs, and three run stops.

Above, Judon sniffs out the play-action concept with a pulling guard to go through two Bucs blockers to sack Brady.

The Patriots also got a few good rushes from rookie Christian Barmore. New England runs a simulated rush again here to get Barmore one-on-one with left guard Ali Marpet. With the blitzers dropping off, Barmore goes through Marpet to flush Brady from the pocket and force an incomplete pass.

Belichick’s rush plan was to pressure Brady without blitzing, and they were able to affect him enough to hold the Bucs to 19 points.

Bucs running back Leonard Fournette had some big runs against the Patriots. But with everyone keying on the pass, they held it together with fewer bodies against the run.

Here, Guy tosses Bucs right guard Alex Cappa like a rag doll to bring Fournette down for no gain.

Judon made one of the biggest stops of the game by jumping inside left tackle Donovan Smith to tackle Fournette for a loss in the red zone.

The Bucs were averaging over five yards per rush for most of the game. Still, the Pats eventually got them under that number and avoided a huge day on the ground for Tampa.

The plan was to live with the Bucs running the ball, and it nearly worked.

In the secondary, the Patriots spent most of the game shadowing the Bucs’ top pass-catchers.

The plan was to play man coverage with zone defenders in the middle of the field, cutting off crossers and other in-breakers after those zone-droppers threatened to rush Brady.

#Patriots were working their zone-match calls in the red zon to perfection. Watch Mills at the top right of the screen. Godwin runs a shallow so he passes him off to the LB then rallies back into the MOF to help Dugger on the TE route. Gives the stunt time to get home. pic.twitter.com/tvx0IgTKBX

In the red zone, the Pats went to match coverages where they passed off underneath routes and continued to pack the middle of the field to take it away from Brady.

New England’s coverage players were superb given the talent for the Bucs at wide receiver.