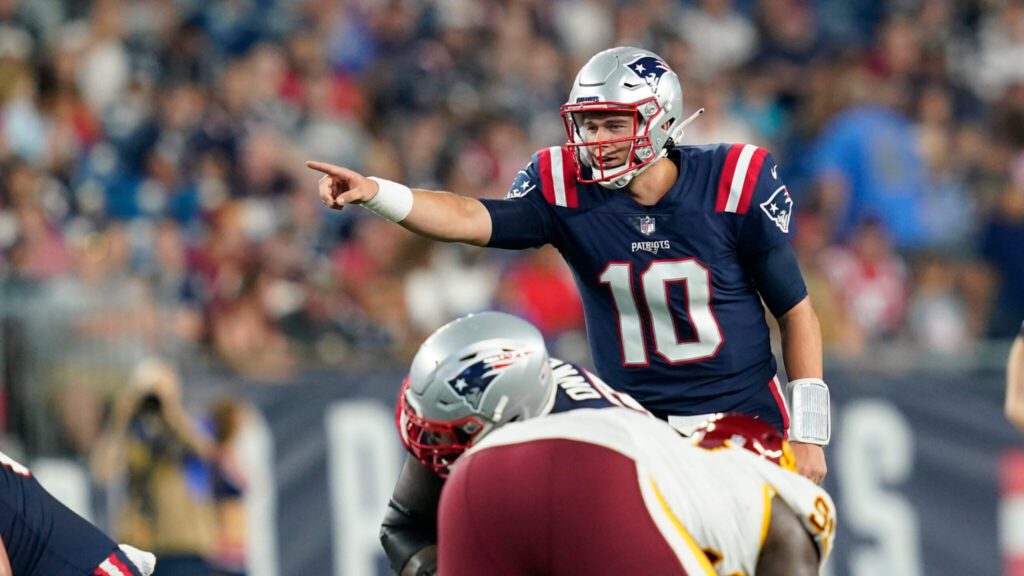 Below are a variety of advanced stats from the Patriots’ 22-13 win over the Washington Football Team in Thursday’s preseason opener.

Since starting quarterback Cam Newton only had seven drop-backs, we’ll focus on the rookie here.

Patriots first-round pick Mac Jones only completed one pass over ten yards in the air with an average depth of target of 7.6 yards, but the Jones-led offense is taking shape already.

The Patriots offense resembled the Pats offense of old from a schematic standpoint once Jones was in the game.

One element of New England’s operation that was a struggle last season was under-center play-action, despite having one of the league’s best downhill rushing attacks.

Starting quarterback Cam Newton averaged 7.9 yards per attempt with one touchdown and four interceptions on 88 under-center play-action pass attempts in 2020.

The rookie quarterback’s only completion that traveled over ten yards in the air was a 13-yard strike to Kendrick Bourne off under-center play-action. The Pats get the linebacker level to bite on a lead play with fullback Jakob Johnson in the backfield. Jones fires the ball on the money immediately once he hits the top of his drop, which prevents the linebackers from recovering underneath Bourne’s route. Jones’s decisiveness is critical in that particular play.

Another marriage between the old Pats offense and the new generation with Jones was the installation of run-pass options, which were a Jones staple at Alabama.

This concept has been in their system for years. I've got a couple clips from 2017 handy. They like it with fast tempo too. pic.twitter.com/XR316Apiq9

As fellow film junkie Bobby Peters pointed out, the Patriots ran a similar play-action design with Tom Brady as the RPOs they dialed up with Jones on Thursday night.

This is straight out of Alabama's playbook for Mac Jones/McDaniels. RPO power with a bubble screen. Mac is reading the backside LB (#59). When he stays inside to defend the run, it gives the #Patriots the numbers on the screen. Easy six yards. Good blocks by Harry and Gunner. pic.twitter.com/srDqvxtSl7

However, the offensive line is pass-blocking in Brady’s version. With Jones, he has the option to hand the ball off to the running back or throw the bubble screen depending on the read.

Veteran quarterback Cam Newton is the Patriots’ starter until further notice, but McDaniels gave us a glimpse of his long-term plan once Mac Jones takes over in the first preseason game.

New England’s quarterbacks were under pressure on ten of their 32 drop-backs on Thursday night, or 31.3 percent, which is an impressive number for the 11 offensive linemen who played.

Outside of Young’s spectacular rush, the other four Pats’ starting offensive line members didn’t allow a single quarterback hit, and only Jones was sacked once in the game overall.

Starting center James Ferentz is having a breakout summer of sorts, allowing only one hurry in 29 pass-blocking snaps with the highest run-blocking grade of all 11 offensive linemen (84.2).

Two other notes in the trenches are that 2019 third-round pick Yodny Cajuste’s return to a game field showed plenty of rust, while sixth-round pick William Sherman only played five snaps.

Overall, it was a good night for the offensive line in terms of keeping the quarterbacks clean.

On the other side of the ball, the Patriots put more heat on Washington’s quarterbacks by pressuring their opponents on 20 out of 51 drop-backs, or 39.2 percent, with two sacks.

– Catches the LT oversetting and jumps inside for QB hit pic.twitter.com/tEYNF127bD

Although it was a small sample size of 12 snaps, free-agent addition Matthew Judon was everywhere for the Patriots defense. Judon registered a quarterback hit, prevented a completion, and made a tackle for loss in his Patriots debut.

Judon was as advertised for the Patriots, as was second-year linebacker Josh Uche. Uche tallied three quarterback pressures, one of which is shown above, where he uses an inside-out move to beat backup left tackle Cornelius Lucas around the corner.

Later on, Perkins showed good discipline rushing over the right tackle by forcing the quarterback away from his arm side, making a more challenging cross-body pass attempt.

New England’s revamped front seven has excellent depth on paper, and we saw that come to fruition in the victory over Washington, where they were pressuring the QB throughout the game.

Perkins’s performance was solid, but new nose tackle Davon Godchaux’s presence in the middle of the defense caught our eye as well. Godchaux’s upper-body power was on full display above. Godchaux punches, separates, sheds, and makes the stop for a minimal gain with ease.

New England’s run defense ranked dead-last in Football Outsiders’ DVOA metric a year ago, making it a focus for Bill Belichick when he was acquiring players this offseason.

Although it’s only one preseason game, it appears that Belichick’s additions are working out.

The Patriots’ defense held Washington to 5.4 yards per pass on 47 attempts on Thursday night.

Jackson picked up where he left off last season with a clean pass breakup on Washington’s top wide receiver, Terry McLaurin, on a quick hitch route to the outside.

As for Bryant, he combined on two passes defensed, including having perfect execution of the Pats’ man coverage rules with fellow safety Kyle Dugger, where Dugger took outside positioning, and Bryant aided Dugger in coverage over the top.

The blemishes in the pass defense came at the linebacker level, where backup inside linebackers Harvey Langi and Cassh Maluia struggled with Washington’s running backs.

New England will certainly take the effort they got from all three levels of their defense on Thursday night.