Advanced Stats Report: Plenty of Blame to Go Around in Patriots’ Loss to the Rams 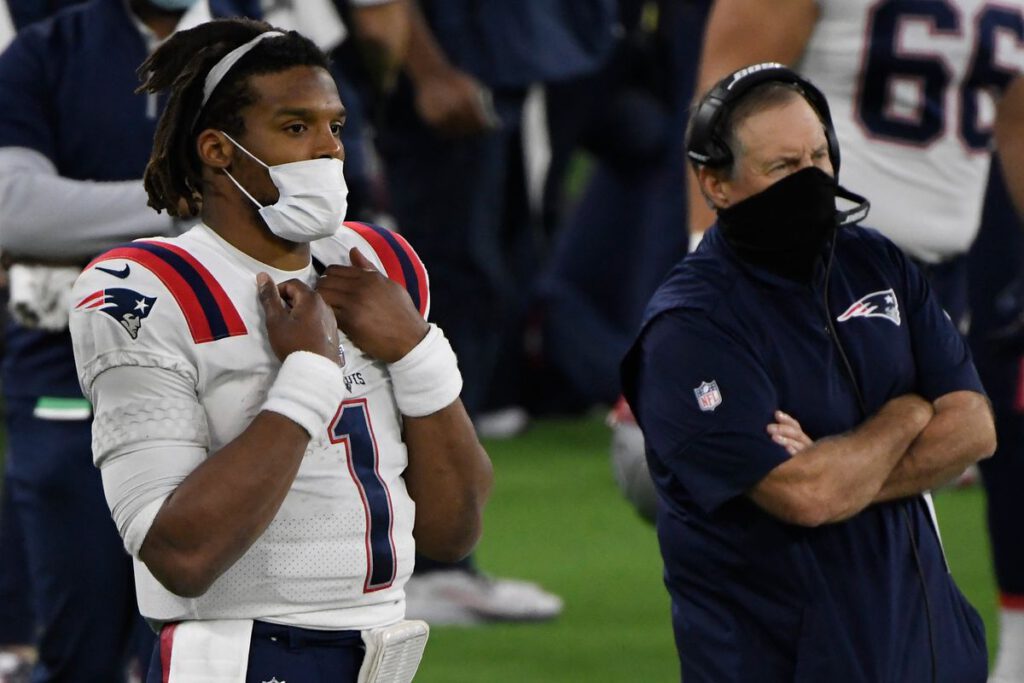 Below are various advanced stats from the Patriots’ 24-3 loss to the Rams in Week 14.

Patriots quarterback Cam Newton is struggling in a passing offense that’s certainly not putting him in a position to succeed.

On Thursday night, Newton had a completion percentage over expected of -14 and an EPA per drop-back of -0.36 even after removing Kenny Young’s pick-six from the equation.

Here’s a great example of the team-wide struggles with New England’s offense. The play’s design is for N’Keal Harry’s (in motion) wheel route to clear out the sideline for Harris. However, Harry runs a lazy route and doesn’t force the coverage upfield, and then, Newton has to throw the ball over two Rams defenders, which makes the play take longer to develop. Harry is not open, and he doesn’t run his route with enough speed to make the coverage respect him; this is not a bad decision by the quarterback.

In other instances, there are chances for production, but the quarterback is hurting them.

In this play, Meyers is open at the sticks to Newton’s right if he throws the ball on time. Harry’s vertical route creates a pocket of space for Meyers to sit down underneath the coverage, but Newton holds the ball and then slides up once the edge pressure gets home into a sack.

Newton had completions of 31, 30, and 25 yards as he did make some solid downfield throws, but the timing and anticipation in the passing game aren’t clicking 12 starts into the season.

As much as we’d love to see Newton with a legitimate supporting cast, he can help the players around him succeed more than they currently are by operating better when the scheme works.

After failing to record a sack in his first two games against the Patriots, Rams All-Pro Aaron Donald led a pass rush that pressured Newton on 43.5 percent of his drop-backs.

New England was forcing the issue in the passing game while trailing on the scoreboard, which always presents opportunities for the defense to rush the passer.

The one area of the line where there’s a clear drop-off is at left tackle, where backup Jermain Eluemunor struggled on Thursday night playing for an injured Isaiah Wynn.

On Donald’s solo sack, the Rams lined him up at defensive end to go against Eluemunor. Donald goes to his cross-chop move and beats Eluemunor clean in a difficult rep for the Pats’ left tackle.

Los Angeles has one of the best defensive fronts in the league, led by the best player in the NFL, and the Patriots found out the hard way how disruptive Donald is every week.

Although it’s inconsistent, the Patriots’ wideouts did create some opportunities in the passing game by either creating separation or using their skillsets properly.

As the chart shows, Pats wide receiver N’Keal Harry only created 1.63 yards of separation on his four targets, yet he played one of his best games of his career on Thursday night.

On Harry’s 30-yard reception, the second-year wideout ran a nice double-move to stack and high-point the ball over Rams corner Darius Williams. Harry charges off the line to close down the cushion, flashes his eyes, and opens his hips back towards the quarterback to sell a break, gets Williams to bite, and then finishes the play by stacking, tracking, and high-pointing the ball.

There are other areas of Harry’s game, such as the play in the Newton section, that still needs fine-tuning, but he’s making progress, and the coaching staff is finally using him correctly.

The Patriots pressured Rams quarterback Jared Goff on 37 percent of his drop-backs, but let’s face it, the story of the game when LA was on offense had nothing to do with the passing game.

Instead, Rams head coach Sean McVay devised a perfect game-plan to expose New England’s run defense that felt like it was turning a corner until Thursday night when McVay surprised them.

The Rams’ head coach went away from his outside zone-heavy rushing attack to incorporate more gap schemes that exposed the edges and second-level of the defense.

On Cam Akers’s 35-yarder on LA’s opening drive, the Rams dial up a duo scheme where they get double-teams inside, and Akers runs at the Y tight end. When the tight end turns John Simon inside, Akers bounces the run off-tackle, and there’s nobody to force the runner back inside with Simon blowing the edge.

The Rams ran duo again on the ensuing drive and got an easy first down on second and short. This time, Adrian Phillips goes inside Cooper Kupp’s block, and Stephon Gilmore doesn’t replace him as the force player, which leaves an easy bounce outside for Akers.

After killing the Patriots on gap runs earlier on, the Rams went back to their outside zone series in their 16-play touchdown drive in the third quarter.

Here, McVay puts two tight ends on the right side of the formation and then motions wide receiver Robert Woods to add another gap on the line of scrimmage. By creating the extra gap, Woods kicks out the new force player, Gilmore, and the scheme puts the onus on safety Devin McCourty to come from depth to fill on the ball, and McCourty is late to that assignment.

New England’s front was driven off the ball far too often on Thursday night, but McVay deserves tons of credit for a run-game script that put defenders in bad positions.

The Rams made the edges vulnerable by showing inside concepts that pinned the defense for bounces outside, forcing the Pats’ defensive backs into the fit.

Belichick bested him in Super Bowl 53, but McVay returned the favor on Thursday night.

After a 25-yard reception on the game’s first play, the Patriots tightened up in coverage and held the Rams’ passing attack at bay. Too bad the running game was a different story.

New England held Goff to 5.5 yards per attempt and -0.12 expected points added per drop-back on his 25 pass attempts, which would’ve been the story if the run defense wasn’t gashed.

One of the Patriots’ bright spots was undrafted rookie Myles Bryant, who made an interception in the second quarter only for the refs to call back the return, and Newton threw a pick-six on the ensuing drive.

On Bryant’s interception, the Rams get Robert Woods open initially on a quick out where Bryant has to go over the vertical route before crashing down on Woods. However, Goff throws the ball too far inside and gives Bryant a chance to make a play, and the Pats rookie takes the ball out of Woods’s hands for the pick.

Bryant went undrafted due to his 5-foot-8, 180-pound stature. But he was always around the ball for the Huskies and appears to be a find for the Pats.