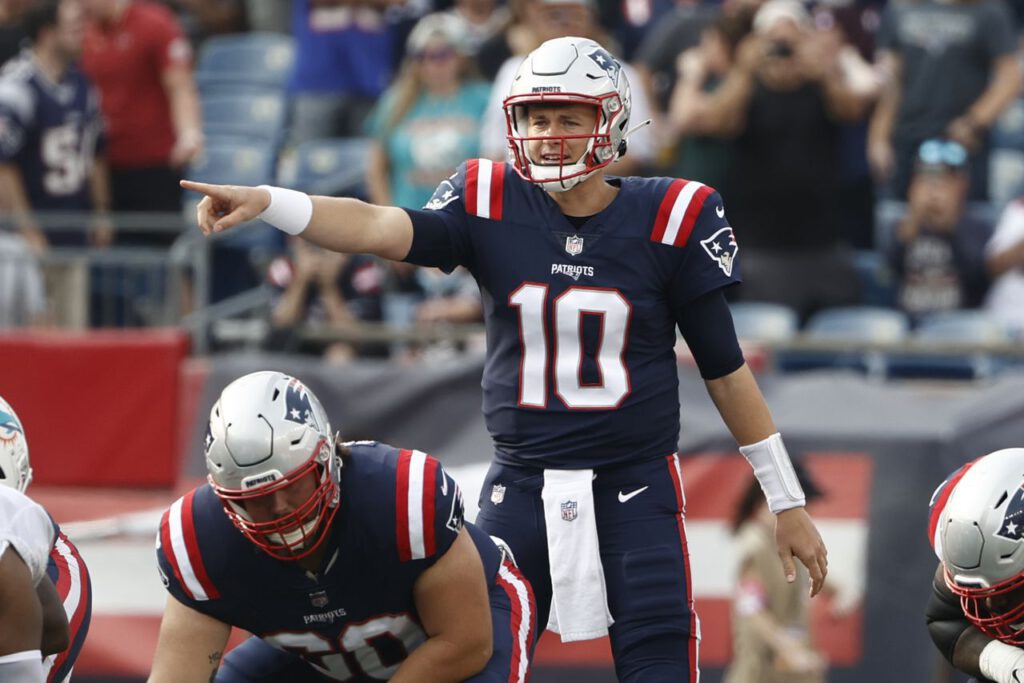 Below are various advanced stats from the Patriots’ 17-16 loss to the Dolphins in Week 1.

The silver lining from Sunday’s loss was that rookie quarterback Mac Jones performed at a level that will win the Patriots their fair share of football games in the future.

ESPN’s QBR metric is on a scale out of 100 and is designed to give a numerical value to the probability in which an NFL team will win a game based on the quarterback’s production.

On Sunday, Jones’s QBR was 75.1, which means the rookie did his part to win the game.

The Patriots’ first-round pick also fared well in other advanced metrics shown above, with his 0.28 expected points added per drop-back ranking in the 78th percentile.

Jones also had a 102.7 passer rating while under pressure and had a 66 percent conversion rate on third-down pass attempts; the rookie was good, and that might be underselling him.

There were several throws to choose from that stood out from Jones on Sunday. But the following example was everything you want in a quarterback on one completion.

In the play, the Dolphins show a single-high coverage pre-snap and then rotate into a cover-two shell. Jones reads the coverage rotations, stands in the pocket knowing he will get hit, and delivers a perfectly placed back-shoulder ball away from the incoming safety.

Jones also did an excellent job of setting the protection at the line of scrimmage to keep himself clean. Above, he brings Jakobi Meyers in as an extra blocker on a zero blitz, gets the protection pointed in the right direction, and makes a leverage throw to Hunter Henry to move the chains.

Miami didn’t give Jones many downfield opportunities, but he took advantage when they did, finishing four-of-six on throws of 15-plus yards and took what was there in the short game.

Hopefully, as the coaching staff grows confident with Jones, offensive coordinator Josh McDaniels will turn him loose more in the downfield passing game.

Based on everything we’ve seen from Jones, the Pats have a long-term answer at quarterback.

New England’s offensive line has some work to do in pass protection, allowing pressure on 35% of Jones’s drop-backs despite the rookie QB having an average time to throw of 2.39 seconds.

Mostly, the issues came on schemed pressure by the Dolphins rather than one-on-one losses, which offers an optimistic spin for the future.

Although there were a few one-on-one breakdowns, the heavy pressure came off the left side, with Miami incorporating line stunts into their 21 blitzes of Jones in Sunday’s loss.

Pats left tackle Isaiah Wynn was responsible for three quarterback hits on these types of schemes. Although Jones completes the pass, watch the line play above. Miami brings a five-man pressure, using two inside penetrators to free up the wrapping linebacker. The goal for the O-Line here would be to pass everyone down so that Wynn can come off his block. Andrews at center takes Onwenu’s man, Onwenu takes Wynn’s, and Wynn picks up the looper. Unfortunately, that never happens, and there’s a free rusher to the quarterback.

Wynn is usually fantastic at picking up stunting defenders in pass protection, so it’s surprising to see him and left guard Mike Onwenu struggle in that regard. It was their first game playing next to each other, with Wynn lining up next to Joe Thuney his entire career.

The left side of the Patriots’ offensive line needs to clean up their execution against stunts, while the Pats also need to get by at right tackle if starter Trent Brown misses serious time.

Although it wasn’t as flashy after Brown’s injury, Patriots running back Damien Harris delivered a 100-yard performance in the season-opener.

Out of those 100 rushing yards, 15 of them fell in the category of rushing yards over expected, according to NextGen Stats, with Harris averaging 0.66 RYOE/attempt (7th among qualified rushers).

The Pats’ lead back got some terrific blocking on his 35-yarder on the first play of the game, though. Onwenu, Andrews, and a new right side featuring Shaq Mason and Trent Brown opened a hole for Harris to explode into the secondary.

Harris’s late fumble that squandered away a chance to win the game overshadowed a solid performance by the Pats’ top running back.

The Pats only pressured Dolphins QB Tua Tagovailoa on 24.1% of his drop-backs on Sunday, but some of that was because 55.2% of Tua’s passes came out in less than 2.5 seconds.

When Miami had to get into its drop-back passing game, the Patriots were able to get to Tua.

Patriots linebacker Matthew Judon led New England’s pass-rush as he has all summer with three quarterback pressures. Above, Judon teams up with a blitzing Adrian Phillips to run an LB/E stunt on third down. Eventually, Judon delivers a clean hit on Tagovailoa to force an interception.

As was the case on this third down, the Pats also got a few great interior pushes from rookie second-round pick Christian Barmore, who walked the right tackle into Tua’s lap while forcing another turnover-worthy throw.

Lastly, second-year edge rusher Josh Uche put his stamp on the game with a thunderous speed-to-power rush that knocked left tackle Liam Eichenberg back into the left guard. Eichenberg steps on the left guard’s foot, which causes him to go down, and Uche goes right through the rookie left tackle for a sack.

New England’s pass-rush made its presence felt whenever the Dolphins were forced into a traditional drop-back passing game. Unfortunately, the quick-game stuff hurt the Pats defensively.

The Patriots’ front seven also controlled the game when Miami’s offense went to the ground, holding the Dolphins to 3.2 yards per rush and a success rate of 43% on 23 rush attempts.

Defensive backs Kyle Dugger and Adrian Phillips led the way with two run stops, while Judon was a key contributor as a strong-side edge-setter.

In this play, linebacker Ja’Whaun Bentley “charges” the mesh point to force Tua to hand the ball off, and the early penetration makes the running back bounce it outside. However, Judon has the edge set, and Dugger reads it well to collapse on the ball carrier.

New England’s defensive front controlled the trenches in all phases when Miami had the ball.

The theme of the game for the Patriots pass defense was Tagovailoa exploiting the Pats’ coverages on run-pass options and quick-game throws.

The graphic above shows that Tua was far more efficient on throws in less than 2.5 seconds, averaging over ten yards per attempt on those passes (3.7 YPA on all other throws).

In a bend-don’t-break game plan, Miami took advantage of the Pats’ tendency to play more off-coverage than press-man. To New England’s credit, it mostly worked as they surrendered only 17 points, 0.01 EPA per play, and dominated time of possessions (4-11 on third down).

However, the easy yards underneath the defense were painful to watch, and rallying to the football will need to improve if the plan moves forward (106 yards after the catch).

Some of the Dolphins’ success came on run-pass options or RPOs, where Tua had a read on the play. Above, Tua reads the backside DE crash down to play the run. With J.C. Jackson playing off and the backside linebacker taking the flat route, it leaves a huge void in the coverage for Jaylen Waddle’s snag/stick route. Then, the Pats have trouble getting Waddle on the ground on a gain of 17-yards.

Other designs for Miami were “check with me plays” for Tua, where he could take it upon himself to throw the ball outside against off-coverage on a designed running play.

In this play, there’s no post-snap read for Tua. Instead, he sees Jackson back off before the snap and decides on his own to toss the ball out to Parker. The run action is holding the linebackers inside, and Jackson is slow to react to the quick pass, and it’s a first-down gainer for Parker.

On the one hand, the Patriots’ defense played well enough to win the game on Sunday, and the bend-don’t-break game plan was mostly successful in keeping Miami out of the end zone.

But on the other hand, both of the Dolphins’ touchdown drives were filled with quick catch-and-run plays that haunted them all afternoon.

Defensively, you can’t stop everything, and you’d rather lose by dink-and-dunk than give it all up in one long play. Still, the Pats need to do a better job of limiting yards after the catch.