Advanced Stats Report: How the Ravens Exposed the Weaknesses in the Patriots’ Run Defense 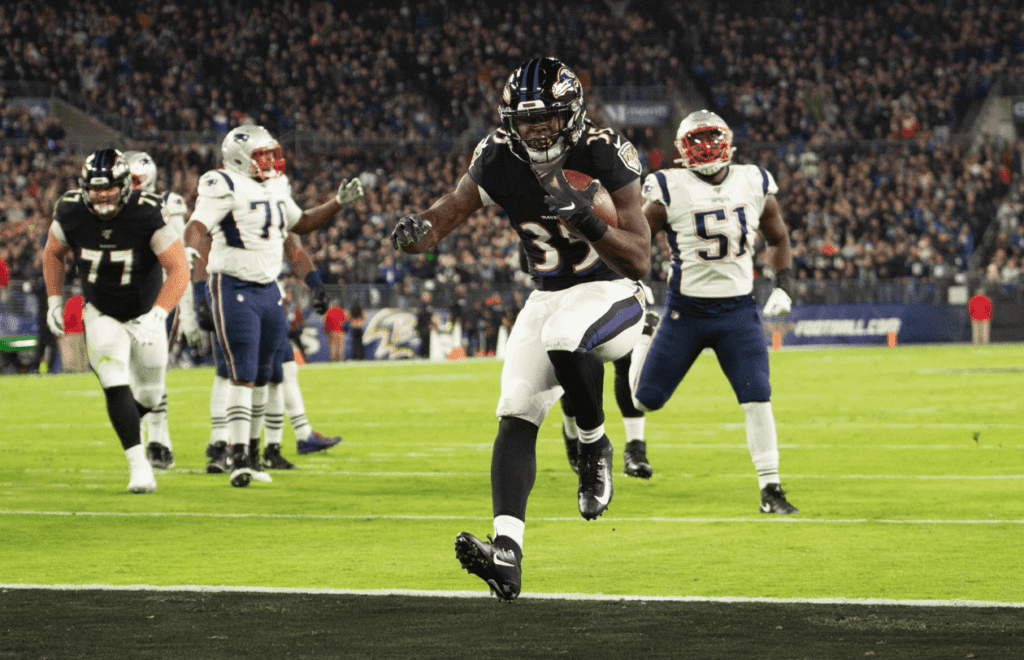 Below are a variety of advanced stats from the Patriots’ 37-20 loss to the Baltimore Ravens.

Brady posted one of his best grades of the season while under pressure (60.3), helping the Pats get back into the game with some terrific quarterbacking on Sunday night.

Brady dominated between the numbers going 15-for-17 for 144 yards on throws over the middle within 20 yards of the line of scrimmage, which equates to nearly 8.5 yards per attempt and a 101.2 passer rating.

Brady danced his way out of a sack with some of his patented pocket movement magic here. Brady was well protected at first, but when he goes to his secondary reads, he starts to feel pressure coming off the right side. He steps up into the pocket, ducking the rush, and then steps out of the pocket to his right to buy more time. Brady eludes the rush, all while keeping his eyes downfield, finding Edelman for a ten-yard completion.

Along with handling pressure well, Brady also protected himself against Baltimore’s blitzes.

Early on, Baltimore brought a series of overloaded six-man blitzes to either sack or hurry Brady on some critical passing situations. Once he saw it a few times, Brady was ready for the Ravens to send zero-blitz pressure.

Here, the Ravens show a zero blitz with six rushers on the line of scrimmage and no deep safeties. The Patriots are in an empty formation with only five blockers, so Brady motions tight end Ben Watson into the formation to account for all six defenders. The Ravens back off and only rush four, so the Patriots have six blockers against four rushers, giving Brady time to let James White get downfield on a vertical route against man coverage. Brady knows he has one-on-one outside without a deep safety, so he lofts the ball up to White, who makes a terrific catch over Ravens safety Earl Thomas.

In the time to throw department, Brady was more deliberate with his release this week clocking in at 2.73 seconds, his slowest release in a game this season.

Despite a slower trigger finger from Brady, the offensive line held up well, allowing pressure on 33.3 percent of Brady’s drop-backs, which is a ten percent improvement from last week.

Based on the television copy, the Patriots got throwback performances from right tackle Marcus Cannon (team-high 93.8 overall grade) and right guard Shaq Mason (86.1).

Along with a solid effort from left guard Joe Thuney, the returning starters from a year ago stepped their game up this week to elevate the play of the line as a whole.

On this third-down conversion, the offensive line kept Brady protected for over three seconds in the pocket against a four-man rush, giving Edelman time to work himself open on the jerk route over the middle of the field.

The running game was also more consistent with the Patriots going to a spread attack and lightning the box count as a result of their three receivers sets.

The Patriots still have a Marshall Newhouse problem at left tackle. He was responsible for four of the ten pressure that Brady faced against Baltimore and one of the two sacks.

However, when starting left tackle Isaiah Wynn returns in a few weeks, this group has the potential to turn things around in a dramatic way in the second half of the season.

In the slot, the Patriots started to unveil some things they’ll do now that they have two production receivers between the numbers in Julian Edelman and Mohamed Sanu.

Brady was perfect throwing to the duo out of the slot completing all 11 of his passes for 64 yards and a touchdown, and the two worked in tandem to create space for each other.

Here, the Patriots motioned Sanu into the backfield and then ran their staple follow concept into the left flat, where Sanu follows Burkhead’s clearout route to flood zone coverage. The linebackers key on Sanu in the backfield, leaving the middle of the field wide open, where Edelman runs a crossing pattern into the vacated area for a first down.

Both Edelman and Sanu played every snap on offense in the loss and based on that and the new wrinkles the Patriots had for Sanu, it looks like he’s catching on quickly.

The story of the game was the struggles of the Patriots run defense, which allowed 210 yards and 7.7 yards per rush to Baltimore running back Mark Ingram.

Before we get to the run defense issues, the Patriots defense contained Ravens quarterback Lamar Jackson reasonably well considering the difficulty of the matchup.

Here’s a sequence of back-to-back plays that shows how the Patriots contained Jackson, preventing him from scrambling for yards when nobody was open downfield. On the first play, the Patriots played a combination coverage with the corners on the outside in a man or match coverage with the second level defenders playing spot-drop zone in the middle of the field. The Pats used a disciplined pass rush and kept extra eyes on Jackson with those underneath zone defenders. On the next play, the Patriots were in their standard cover-1 man coverage, but defensive back Jonathan Jones rotated down into a spy role on Jackson.

In run defense, the Patriots’ struggles started with the interior of the defensive line and were also scheme related based on how they play out of their 3-4 defense.

Ingram’s 53-yard rush sums up the night perfect for the Pats front seven. The Patriots were in their base 3-4 defense, where the defensive line is two-gapping and occupying blockers while the linebackers track the running back to meet him in the hole. The problems start at the line of scrimmage where nose tackle Danny Shelton fails to make contact with the center and then gets turned out of the hole by right guard Marshall Yanda. Yanda’s excellent block allows the center to climb to linebacker Ja’Whaun Bentley, and the left guard clears Adam Butler out of the hole, and that’s all she wrote.

In a two-gapping system, the defensive line needs to eat blockers upfront. If they don’t keep the linebackers clean, they’re at a disadvantage because the linebackers are reading and reacting rather than attacking downhill.

The Patriots defense was on skates for most of the night trying to hold up against the powerful Baltimore offensive line rather than coming to the lead blockers to stall their momentum.

If the Ravens and Patriots meet again in the postseason, my guess is that the Patriots go into attack mode defensively. There was way too much sitting back and getting bullied going on.

Another piece of Baltimore’s blueprint offensively was how the Ravens attacked the Patriots through the air.

Instead of throwing at the best secondary in the NFL, Baltimore picked on the Pats linebackers and safeties in coverage with Lamar Jackson staying patient on short throws.

Entering Week 9, opposing quarterbacks had only eight completions to four interceptions on throws of 20 or more yards against the Pats defense, so the Ravens dinked and dunked.

Here’s one concept the Ravens used to get the Pats linebackers in space on passing plays. Baltimore likes to align their tight ends in more of an H-back role off the line of scrimmage, and the motion before the snap by the other tight end signals run. The Ravens then ran a non-arm side bootleg action with the H-back tight end sliding out the backside of the formation into the flat. The slide route presents a foot race between Dont’a Hightower and Hayden Hurst, and Hightower hesitates just enough while reading the run fake for Hurst to beat him to the corner.

In the fourth quarter, the Ravens effectively ended the game with a nine-plus minute drive where Jackson completed two passes for 29 yards to Ingram. Baltimore knew they could get Ingram matched up in man coverage on the Pats linebackers, and they ran him into the flat through some traffic to get him into space.

GAP READS … #Ravens run game #Pats with QB “read” plays. 10 of the first 12 runs in the 1st Q had a read element. #Ravens chose GAP READ plays rather than ZONE READ plays. Follow this thread as I coach you up on the reason why Ravens chose these GAME PLAN schemes pic.twitter.com/mMB4W10rXz

Baltimore gashed the Patriots with a combination of early gap-read runs and zone handoffs to their backs, and when they went to the air, it was short, and they avoided the Pats secondary.

Not many teams have the personnel to copy Baltimore’s blueprint completely, as they have Jackson, a power running game, and multiple passing-catching tight ends.

With Baltimore’s offensive personnel, the Patriots couldn’t play their brand of defensive football where they flood the field with defensive backs in either nickel or dime packages.

Instead, they played the game out of base defense, and the Ravens created speed mismatches all over the field, back to the drawing boards for the boogeymen.