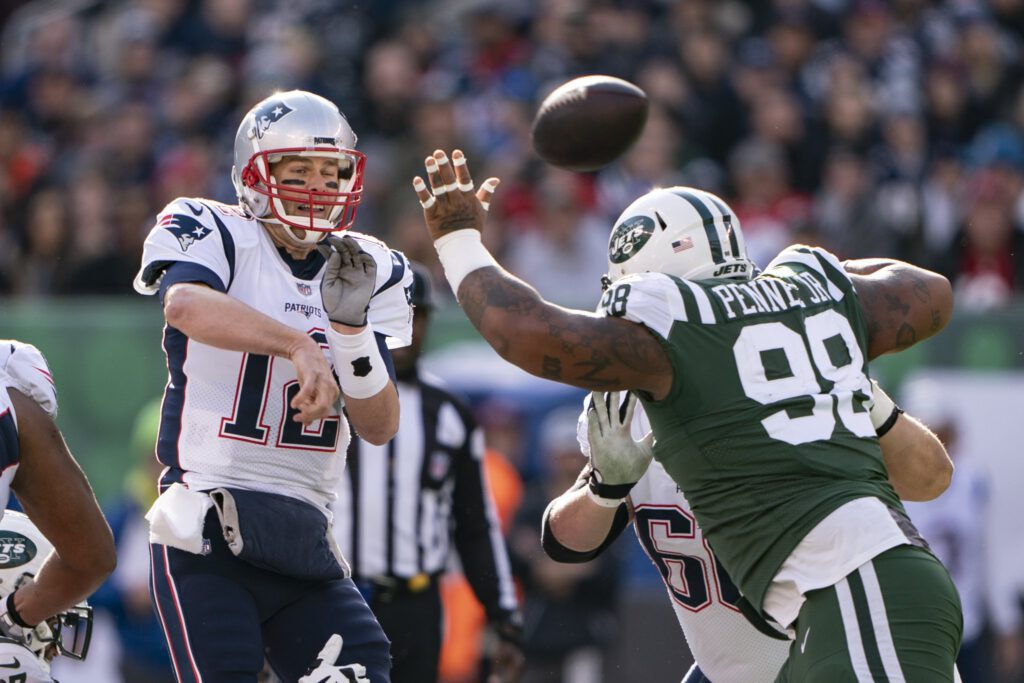 Below are a variety of advanced stats from the Patriots’ 27-13 win over the Jets on Sunday.

Brady returned to form against the struggling Jets with a vintage performance for the five-time Super Bowl champion.

The 41-year-old attacked the Jets defense in the middle of the field, as he so often does, and got his groove back while under pressure with an impressive 131.7 passer rating while under duress on Sunday.

In the win, 212 of Brady’s 283 passing yards came on throws between the numbers, and he had a stellar 139.6 passer rating on those throws.

Furthermore, on nine pass attempts under pressure, Brady averaged 11.1 yards per attempt and had multiple completions while absorbing a hit in the pocket.

Entering Sunday, Brady’s passer rating under pressure was only 71.0, and he averaged just five yards per attempt on those passes.

Brady’s touchdown pass to tight end Rob Gronkowski in the first quarter summed up the day for the Pats quarterback perfectly as it was both a throw under pressure and down the middle of the field.

On the play, the Jets are in an inverted cover-2 which leaves the middle of the field open for Gronk on the seam route. Brady reads the coverage perfectly and delivers a dime to his tight end while taking a shot in the pocket. Throws like these are what made Brady the league’s MVP a year ago, and haven’t come as often this season.

Brady also threw a perfectly placed pass to Julian Edelman along the sideline while under pressure later on in the contest.

In the time to throw department, Brady held onto the ball a bit longer, clocking in at 2.58 seconds, as his offensive line was spectacular and the Jets only blitzed him five times.

After his worst game of the season against the Titans, Brady reminded us why he’s headed for Canton on Sunday in the Meadowlands.

Speaking of the offensive line, we already know how dominant this unit was in the running game, and I’ll have more on that later in the week, but they were also solid in pass protection as well.

In all, Brady was pressure on a modest 29 percent of his drop-backs (nine total), and although the interior of the Patriots’ offensive line had some trouble against Leonard Williams and Henry Anderson, the Patriots’ starting tackles pitched shutouts in New York (left tackle Trent Brown was called for two holding penalties).

In Tennessee, the Patriots struggled to pick up some blitzes that old friend Mike Vrabel threw their way, and although the Jets didn’t blitz much, the Pats offensive line was up to the task when they did bring extra pressure.

On this crucial third down conversion late in the game, the Jets brought five rushers on a blitz from the slot. The Pats picked it up perfectly; left tackle Trent Brown showed off his footspeed to cut off the angle on the blitzer while running back James White accounted for the rusher off the edge. The interior of the offensive line allowed Brady to slide up in the pocket, and he delivered the pass to Josh Gordon on the comeback route for the first down.

In all facets of the game, the Patriots offensive line was terrific on Sunday.

As you’d expect based on Brady’s passing chart, the slot was once again a very productive area of the offense for the Patriots in New York.

Brady threw for 138 yards and both touchdowns to receivers running from inside the formation against a Jets defense that struggled in coverage.

Patriots wide receiver Julian Edelman led the way running 58.1 percent of his routes from out of the slot, and in the first quarter, he reminded us just how fast he is when he gets a free release.

Here, Edelman comes in motion with Jets cornerback Morris Claiborne in man coverage. Due to the stacked alignment, Claiborne is unable to get his hands on Edelman at the line of scrimmage, and the Pats wideout torches him on a drive route.

When Edelman returned to the lineup in Week 5, you knew he’d bring the slot back to the Patriots offense, and he has done just that over the last seven games.

Upon review, the Patriots had one of their most disruptive games of the season rushing the passer against Josh McCown and the Jets on Sunday.

The Patriots pressured McCown on 54 percent of his drop-backs, their second-highest pressure percentage in a game this season trailing only their Week 1 performance against the Texans (54.8).

Leading the way, as he has all season, was Patriots defensive end Trey Flowers.

Flowers was at his best rushing on the interior, as he took advantage of the Jets interior offensive line many times on Sunday including on his lone sack of the game, a pressure that forced Stephon Gilmore’s interception, and the following play that generated an overthrow.

On the play, Flowers rushes over Jets left guard Spencer Long and tosses Long to the side with hand usage and power before closing in on McCown. Flowers comes with a two-hand punch inside of Long’s frame to establish control early on in the rush and then sheds with a shoulder slap move to toss the Jets guard to the ground on his way to the quarterback.

On Flowers’ sack, you can see the power in his hands and how he wins with excellent pad level on a regular basis. The Patriots ran a twist on the interior with Flowers coming around the penetration by Adam Butler before popping right guard Brian Winters into the backfield and finishing the play with a sack.

After the game, Flowers explained to me what changes for him when he rushes on the interior saying, “knowing that it will come quicker as far as point of attack and engaging the offensive lineman. On the edge, you might get a few steps and then engage, but on the inside you understand it comes a little quicker so you gotta have your hands ready and go a little faster.”

On the season, Flowers now has 45 total pressures, which is 12 more than the next closest Patriot (Adrian Clayborn – 33), and ninth among all edge defenders.

Against the run, Patriots safety Patrick Chung led the way with five stops and was among the Patriots that bounced-back from a rough performance against the Titans before the bye.

Let’s start with some of the positives, headlined by top cornerback Stephon Gilmore.

Gilmore, who struggled against the Titans and Corey Davis in the Patriots’ last game, was excellent on Sunday with a team-high 88.2 overall grade from Pro Football Focus.

On the stat sheet, Gilmore allowed only one reception for 17 yards to go along with an interception, mainly following Jets speedster Robby Anderson and wideout Quincy Enunwa.

Gilmore’s positioning and physicality within the route are always impressive, and he shows that off on the following play to prevent a long completion to Anderson in the fourth quarter.

The Patriots are in a cover-0 scheme as they blitz McCown on the third down play, which leaves Gilmore on an island with Anderson on the perimeter. McCown knows he has the one-on-one matchup and throws an accurate deep ball to his wideout. However, Gilmore times up the route perfectly and makes contact with Anderson as the ball arrives to contest the catch. Specifically, watch how Gilmore grabs Anderson’s left arm as the ball arrives. That forces the Jets wideout to attempt a one-handed catch, and the Patriots get off the field on a critical third down.

As a tandem, the Patriots’ top two corners, Stephon Gilmore and Jason McCourty, allowed only three catches for 61 yards on Sunday.

On the other hand, it was a rough day for Patriots nickel corner Jonathan Jones, who lost significant playing time after struggling to keep up with Jets slot receiver Jermaine Kearse.

Jones had trouble tracking Kearse across the field due to Kearse’s excellent combination of speed and agility and rookie corner J.C. Jackson replaced Jones in the second half.

Also, the Jets did an excellent job of exploiting the Patriots’ linebackers in coverage with a sound game plan to get their ball to their tight ends and running backs in the passing game.