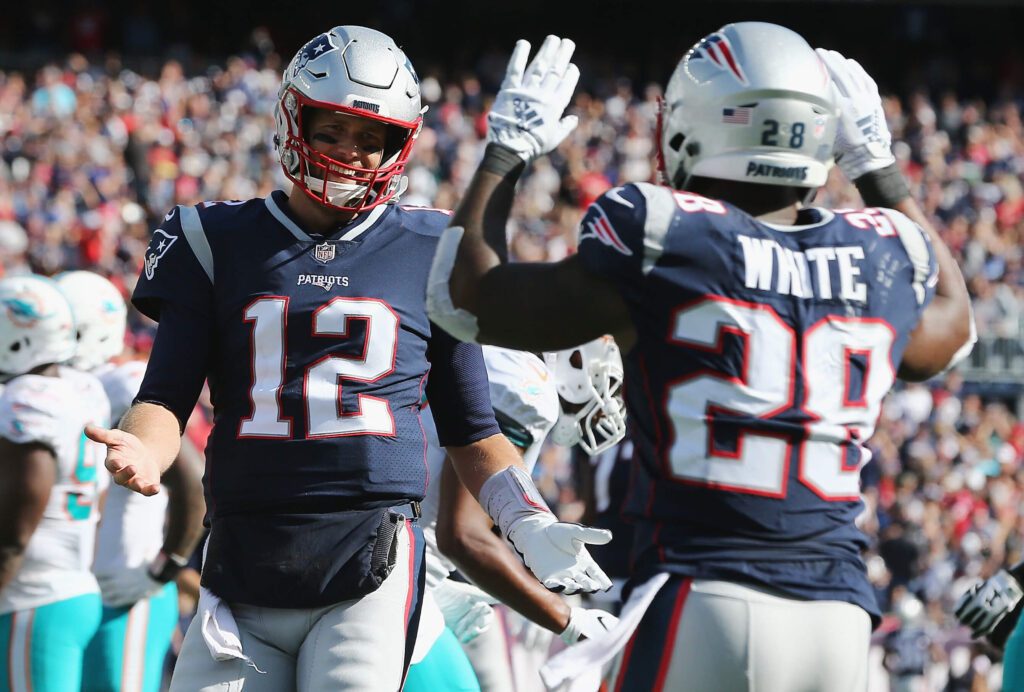 Below are a variety of advanced stats from the Patriots’ 38-7 win over the Dolphins in Week 4:

The Patriots returned to the win column, and Tom Brady reestablished the passing game to the perimeter and deep part of the field on Sunday.

Brady was seven for ten for 118 yards, three touchdowns and a near-perfect 149.2 passer rating on throws outside the numbers against the Dolphins in Week 4.

In the previous two weeks, Brady was a much less efficient 12 for 25 for 98 yards, one touchdown and a well-below average 71.8 passer rating on targets to the perimeter.

The presence of Josh Gordon wasn’t even a huge factor in the drastic improvement for Brady, as Gordon only played 18 snaps, but offensive coordinator Josh McDaniels helped Brady out by getting some separation for the Pats receivers on the outside with scheme, such as the pick/rub concept that sprang Cordarrelle Patterson for a 55-yard touchdown in the second quarter.

In another positive development, Brady also improved throwing the ball downfield on deep pass attempts (passes of 20 or more yards in the air).

On Sunday, Brady completed two deep throws out of six attempts and should have had three completions, but wide receiver Phillip Dorsett dropped a beautiful throw on a deep post.

Against the Jaguars and Lions, Brady didn’t complete a single deep pass on seven attempts.

Lastly, in the time to throw department, Brady came in at a blistering 2.3 seconds, as he continues to get the ball out as quickly as possible this season.

Although it wasn’t a perfect day for Brady, seeing his efficiency return outside the numbers and in the deep part of the field is a welcomed sight and should continue to improve as Josh Gordon is incorporated into the offense.

For Brady’s offensive line, although the unit was terrific in the run game, pass protection was a struggle at times.

Credit should go to the Dolphins’ bookend rushers in Cameron Wake and Robert Quinn, but Quinn, in particular, had his way with Patriots left tackle Trent Brown.

Brown allowed five total pressures and four quarterback hits mostly matched up with Quinn on Brady’s blindside, and although Brown made some critical blocks in the run game, he continues to struggle on the whole this season.

Run blocking has been the main concern with Brown, as he has a difficult time with his footwork and controlling the top-half of his large frame, but on Sunday, he struggled to block Quinn’s speed to power in pass protection.

Although Brown hasn’t completely torpedoed the Patriots offense, it hasn’t been a smooth transition for the Pats from former left tackle Nate Solder to Brown.

In all, Brady was pressured on 13 of his 35 drop-backs (37 percent), which isn’t catastrophic but leaves plenty of room for improvement.

With Julian Edelman returning this week, I will have an extensive stat-based breakdown of the struggles inside the numbers for the Patriots receivers in his absence.

Although Patterson’s long touchdown came from a slot alignment, it was another quiet day for the Patriots receivers catching passes in the middle of the field.

One interesting note here, after spending 50 percent of the time in the slot through the first three weeks, Pats wideout Chris Hogan didn’t run a single route inside the numbers against the Dolphins.

Hogan has struggled to create consistent separation in the slot and didn’t fare much better on the perimeter on Sunday, but he’ll likely go back to the outside full-time with Edelman back in the lineup.

The Patriots defense pressured Dolphins quarterback Ryan Tannehill on a modest 36.3 percent of his drop-backs, but he only dropped back to pass 22 times on Sunday.

And when you look at the individual pressure stats, you can see that when the Pats did harass Tannehill, they did so with multiple pressures on any given passing play.

Patriots linebacker Kyle Van Noy paced the team with three total pressures and had one of his best games as a Patriot Sunday, and newcomer John Simon made a considerable contribution in limited snaps in his first game with his new team.

Simon tied for the team lead with three pressures, sacked Tannehill on a terrific bull rush move on an LB/DE twist, and added three run stops on only 20 snaps.

As Simon learns more of the defensive playbook, expect his role to grow if he continues playing at this level.

Along with the pressure from the linebackers, the Pats’ interior rushers had a terrific bounce-back performance this week.

The Patriots won’t have an elite interior rusher this season, but if they can continue to get multiple players to contribute from the inside that will be massive for this defense.

Finally, the Patriots run defense had a tremendous turnaround performance as well, thanks to a team effort which included eight run stops from defensive backs with slot cornerback Jonathan Jones leading the way with four run stops.

As you’d expect, the Patriots’ coverage stats look terrific after holding the Dolphins to only 116 yards through the air.

The significant development here was the lack of yards after catch for a speedy and elusive group of skill players on the Miami offense.

Belichick also noticed the improved tackling saying, “We tackled better than we have the last couple weeks, certainly, so we were able to create more long-yardage situations.”

From an individual perspective, Patriots cornerback Jason McCourty deserves a ton of credit for his play since replacing Eric Rowe as the starting outside cornerback opposite Stephon Gilmore.

McCourty has also been one of the best tacklers on the team, and his 78.0 coverage grade leads ranks only behind rookies J.C. Jackson and Ja’Whaun Bentley who have both played significantly less snaps in coverage this season.

McCourty’s versatility and veteran savviness have stabilized things for the Patriots in terms of their number two corner spot behind Gilmore.