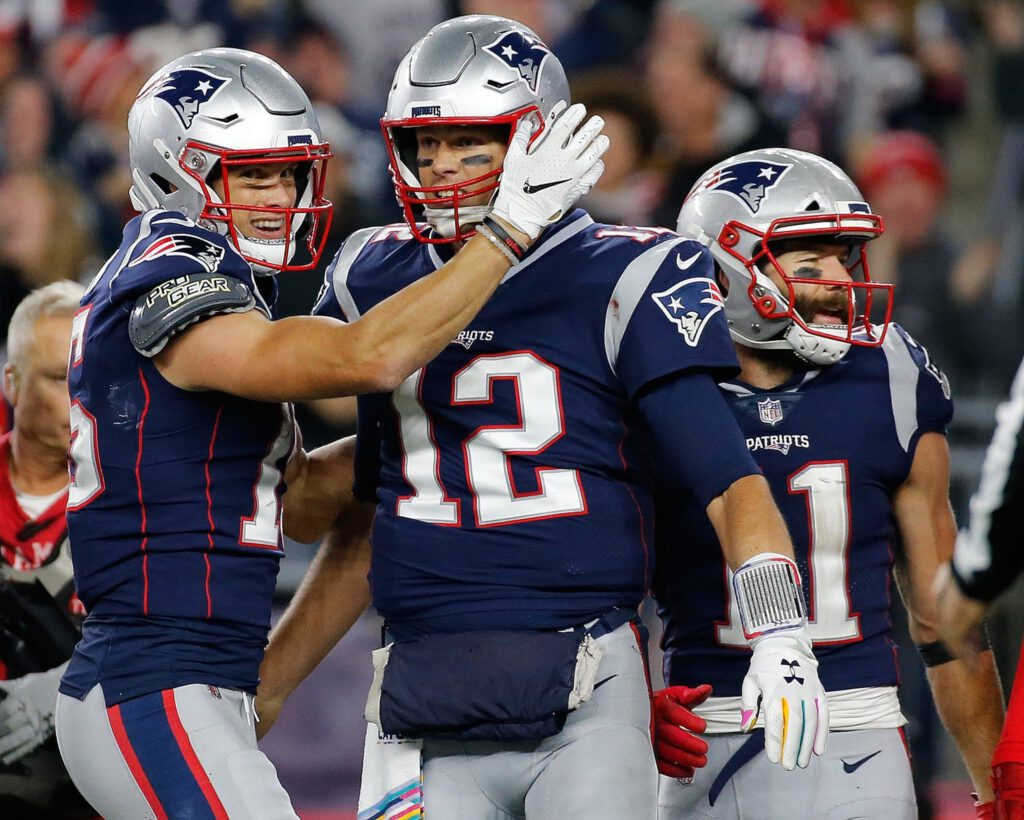 Below are a variety of advanced stats from the Patriots’ 43-40 win over the Chiefs on Sunday night.

In another terrific performance from Brady, the Pats quarterback saw his favorite area of the field return in a big way on Sunday night.

Things were trending in this direction last week with the return of Julian Edelman, but Sunday night cemented the return of the middle of the field for Brady.

The five-time Super Bowl champion threw for 171 of his 340 yards between the hash marks against the Chiefs, and as you can see on the graphic above, his PFF grade was off the charts when targeting that area of the field.

Brady also dropped two dimes in the fourth quarter to the deep right sideline; one to Chris Hogan on a third and one play and other to Gronk on the game-winning drive.

The three-time MVP was able to get the ball out quickly against the Chiefs defense with a time to throw of 2.31 seconds, and he had an 80 percent completion rate on throws released in under 2.5 seconds.

Brady wasn’t perfect on Sunday night, the sack fumble being an egregious error, but he had arguably the best game of his season against the Chiefs and has been his MVP-self in back-to-back weeks after a slow start to 2018.

The Patriots’ offensive line controlled this matchup when the Patriots had the ball both on the ground and through the air.

In all, Brady was only pressured on nine of his 38 dropbacks (23.7 percent), and the second strip sack was on Brady for not getting rid of or protecting the football.

The Patriots’ offensive line also kept pass rusher Dee Ford from wrecking the game for the offense as well, as Ford only managed four hurries failing to hit or sack Brady at all on Sunday night.

Also, as they have for the last three weeks, the offensive line deserves credit for clearing the way for running back Sony Michel on the ground.

The Patriots got contributions from everyone in the run game, but this 12-yard run by Sony Michel in the first quarter puts into perspective how easily the Pats’ O-Line was moving the Chiefs front. On the right side, Shaq Mason and Marcus Cannon combine on a double-team to create the initial push, and Joe Thuney pulls through on the counter play to stand up the linebacker in the hole. Then, Cannon climbs off the double-team block to the second level to get two on the play.

Patriots offensive line coach Dante Scarnecchia will undoubtedly find mistakes in need of correcting, but overall, he has to pleased with the play from his guys on Sunday night.

As stated earlier, the Patriots got terrific production against Kansas City from receivers running out of the slot.

With Julian Edelman back in the mix, the middle of the field has become a danger zone for opposing defenses against the Patriots once again.

Chris Hogan and Gronk got into the fun on Sunday night, as Gronk’s 39-yard catch on the game-winning drive came from a slot alignment, but Edelman was also a significant factor.

On Edelman’s touchdown catch, he starts in the inside slot out of a bunch formation split on the hashes. The alignment allows Edelman to release freely downfield and get easy leverage by coming across the defenders face, and Brady drops the throw in the bucket. The post route by Gronkowski and return route by Hogan allows Edelman to get upfield on the corner route against the corner playing with inside leverage. This was a great design and call by offensive coordinator Josh McDaniels and a great example of what Edelman brings to the Patriots offense.

The Patriots mixed things up in the front seven to confuse Chiefs quarterback Patrick Mahomes, and for the most part were successful with the strategy.

Mahomes was pressured on 35.1 percent of his dropbacks, which is solid, but it was his performance under pressure that might have won the Patriots the game.

The Pats were able to throw a few disguised blitzes at the young Mahomes, and as he did in weeks before, he failed to reset the protection or recognize where the rush was coming from, and it forced some errant throws and short completions.

Here’s a good example. The Patriots walk six defenders up to the line of scrimmage that appear to be blitzing on the play. However, three of those defenders end up showing blitz before retreating into coverage, making this a three-man rush. Mahomes is fooled by the disguise and doesn’t slide the protection to account for Trey Flowers on the backside who, as a result, gets a free run at the quarterback. Mahomes thought he needed extra blockers in the middle of the line to block the blitzers, but the Patriots fool him here, and the edge force from both directions ends up forcing Mahomes to get rid of the football for a short gain to Tyreek Hill.

On a negative note, the Patriots run defense allowed Chiefs running back Kareem Hunt to gain eight yards per carry on the ground.

The Pats conceded the run at times to play coverage, but they were gashed by Kansas City’s outside zone schemes, as horizontal speed and defeating blocks on the move was once again a problem for New England.

As you’d expect, it was a rough night for the Patriots secondary, especially in the second half.

On the one hand, you expect the Chiefs offense to make some plays; they have a very explosive and talented group of pass catchers with Mahomes’ arm talent to boot.

But on the other hand, the biggest concern from Sunday night’s meltdown in the second half was the yards after the catch.

After two solid performances in that regard, the Patriots allowed 194 yards after the catch to the Chiefs on Sunday night; it’s one thing to give up the big plays, but you have to limit those plays by getting the receivers on the ground after he makes the catch.

The Patriots defensive backs explained some of the miscues in the post-game locker room on Sunday night:

Tyreek Hill’s first touchdown catch was chalked up to poor route design by safety Devin McCourty who was in coverage on the play. McCourty said that its difficult for anyone to stop Hill running across the field like that on an island, which is true, and that the Patriots adjusted immediately to that look to have the safety help in the middle of the field go towards Hill and force the ball elsewhere.

On Hill’s 75-yard touchdown, the Patriots insisted that this play wasn’t a coverage bust. They said that they did a poor job of identifying Hill’s release and alignment on the play, but that nobody was necessarily out of position or playing the wrong coverage. Safety Duron Harmon also added that, even though Hill is fast, he has to do a better job of getting him on the ground.

On a positive note, cornerback Stephon Gilmore was brilliant once again. Gilmore shadowed Chiefs wide receiver Sammy Watkins most of the night and held Watkins to two catches for 18 yards.