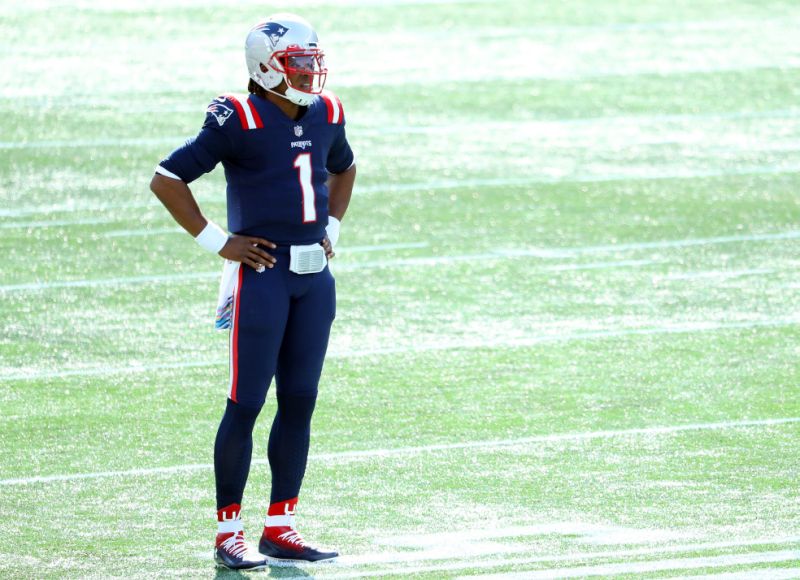 FOXBOROUGH, MASSACHUSETTS - OCTOBER 18: Cam Newton #1 of the New England Patriots reacts against the Denver Broncos during the first half at Gillette Stadium on October 18, 2020 in Foxborough, Massachusetts. (Photo by Maddie Meyer/Getty Images)
Share
Facebook Twitter Email

Below are a variety of advanced stats from the Patriots’ 18-12 loss to the Broncos in Week 6.

Patriots quarterback Cam Newton had a forgettable performance in his return from the coronavirus.

After New England’s quarterbacks cost them a win in Kansas City, the hope was that Newton would right the ship, but instead, there were more turnovers and missed opportunities.

The Patriots lost a total of 7.1 expected points on Newton’s 32 drop-backs, which excludes Ryan Izzo’s fumble after the catch but does count Cam’s two tipped interceptions against him.

Newton also failed to complete passes at an expected rate, with a completion percentage over expectation of -0.5, meaning CPOE suggests he should’ve completed more throws than he did.

One of the reasons why Newton struggled on downfield throws was that his throwing mechanics were rusty after the long layoff. In the audio breakdown above, we describe how Newton is “breaking the chain” on his deep attempts. Newton’s footwork and weight transfer were off, so he was arm throwing rather than generating velocity from the ground up.

Patriots quarterbacks coach Jedd Fisch has worked tirelessly on improving Newton’s footwork, but the lack of practice time saw his mechanics revert to his old ways.

Another area where Newton had issues against the Broncos was his processing speed.

The Pats quarterback spent an average time of 2.78 seconds in the pocket and took over five seconds on average to run or scramble when he couldn’t find an open receiver.

Scrambling isn’t necessarily Newton’s game, but it has to be now with the Pats deficiencies at receiver. Plus, he needs to be more willing to check the ball down in a timely manner.

For example, here’s the one sack from the game that falls squarely on Newton’s shoulders. The Broncos rush seven on a blitz and run an inverted coverage in the secondary, meaning the safeties drop down while the corners take the deep-halves of the field. Newton knows he has his tight ends staying into block initially before releasing as check-downs in the flat, and they block the blitz. However, he scans downfield for over five seconds, waiting for one of his two receivers to get open. His tight ends are open once they release into the flats, but Newton can’t get there in his progression and is sacked. Just take what you can get.

We’ll have a better idea of the reasoning behind New England’s lackluster passing attack against the Broncos after reviewing the coaches film, but it wasn’t all on the receivers.

The Patriots offensive line was a mess at times. However, the players were in an impossible situation with backups all over the line and zero practice time together.

Not all of that was on the blocking, but Wynn’s struggles were unfortunate in a week where they needed their regulars to perform at a high level.

Wynn had issues with the speed of the game at guard, where rushers get on blockers quickly. On Newton’s first interception, Broncos defensive tackle Shelby Harris fired off the ball and used a swim move to beat Wynn. Wynn looks like he’s pass-setting at tackle as he gets back in his stance and starts to mirror Harris. At guard, you don’t have time for that.

We also highlighted Wynn’s matchup with Broncos edge rusher Bradley Chubb, and Chubb made Wynn look bad with a long-arm bull rush that brought Wynn to the ground on Chubb’s way to Newton for a sack.

New England needs a better effort from Wynn moving forward, which they’ll hopefully get by keeping him at left tackle with a group of teammates he’s familiar with next week.

Look, NextGen’s separation stats need to be taken with a giant grain of salt. Football isn’t easily explained with chips in players’ shoulder pads measuring the distance to the nearest defender.

Still, the Pats wideouts were below league-average across the board in separation on their targets, with tight end Ryan Izzo measuring out the best at 2.77 yards of separation.

This season, New England’s top three receivers, Harry, Byrd, and Edelman, are all outside the NFL’s top 40 in average separation on their targets and are hovering around league-average.

Separation metrics tell us things about both the scheme and the individual player, and from this perspective, it’s a little bit of everything that caused the issues on Sunday.

With that said, the Patriots’ ranks here aren’t as bad as some might expect; there are open receivers, even if they aren’t wide open, that Newton should hit with the proper blocking.

The Patriots lost along the line of scrimmage on both sides of the ball, with their defense only pressuring Broncos quarterback Drew Lock on season-low 22.2 percent of his throws.

New England got some pressure by blitzing Lock 12 times, which led to a sacks for Ja’Whaun Bentley and John Simon and two pressures for Shilique Calhoun on defensive line stunts.

Ultimately, the Patriots ran their typical pressure schemes and couldn’t get home nearly enough, which probably has a lot to do with a limited role for top pass-rusher Chase Winovich.

Winovich only played 22 snaps, or 34 percent, after leading the team in total disruptions through the first four games of the season.

Some of Wino’s low usage had to do with injuries on the defensive line, as ESPN’s Mike Reiss noted. The Patriots needed their edge defenders to play at defensive end after Adam Butler left the game, and Winovich got pushed around a bit playing on the interior of the line.

Still, Winovich only getting 12 opportunities to rush the passer isn’t enough, as he’s their best one-on-one pass-rusher and needs to be out there to harass quarterbacks.

The Pats will hopefully unleash Winovich once again next week with better interior defensive line depth.

Denver broke off some big runs early, but the Patriots run defense controlled most of the game by holding the Broncos to 3.6 yards per rush on 37 carries.

New England got excellent contributions from linebacker Ja’Whaun Bentley and hybrid linebacker Adrian Phillips, as the two tied for a team-best five run stops on Sunday.

Bentley’s ability to attack downhill at the line of scrimmage was on full display on several occasions, while Phillips worked nicely off the blockers in front of him to scrape and tackle.

The Pats run defense is rounding into form, holding the Chiefs and Broncos to 3.7 yards per rush in their last two games.

Although they gave up some big plays, the Pats secondary was in control of Sunday’s game, especially cornerback Jonathan Jones.

Jones was outstanding, allowing only one completion on seven attempts with three forced incompletions and an interception. Jones’s passer rating into his coverage was 0.0, meaning Lock would’ve had a higher rating by throwing the ball away instead of targeting Jones (39.6).

The Pats slot cornerback’s success stems from his ability to play man coverage with his back to the quarterback without interfering and aggressively playing through the catch point.

Here, Jones needs to defend a corner route by Broncos tight end Albert Okwuegbunam from a bunch formation with Okwuegbunam starting inside. Immediately, Jones is out-leveraged and in a trial position, but he positions himself perfectly to stay tight on Okwuegbunam and reacts to his hands. Once Okwuegbunam raises his hands to catch the ball, Jones chops down on the rookie tight end to break up the pass.

Later, Jones took a touchdown away from Okwuegbunam by once again playing the catch point to knock the ball loose once it’s in the rookies’ grasp.

Then, he capped it off with a ridiculous interception by running a better go route than Broncos wideout Tim Patrick, who had two big plays on go balls earlier in the game.

As a full-time slot, Jones’s 36 targets through five games ranks fifth among all cornerbacks, as he plays a high-volume position with Stephon Gilmore and JC Jackson on the outside.

Teams will continue to attack Jones in the passing game due to the nature of being inside where there’s more space and a focus on avoiding Gilmore and Jackson at all costs.

Jones is playing like one of the best nickel corners in football through the first five games of the season, with the third-best passer rating into his coverage among slot cornerbacks (72.3).

One more note: Stephon Gilmore allowed only five catches for 54 yards into his coverage in the last three games. He’s playing at a high-level once again after a slow start.