Advanced Stats Report: What Went Wrong with Tom Brady and the Patriots Offense? 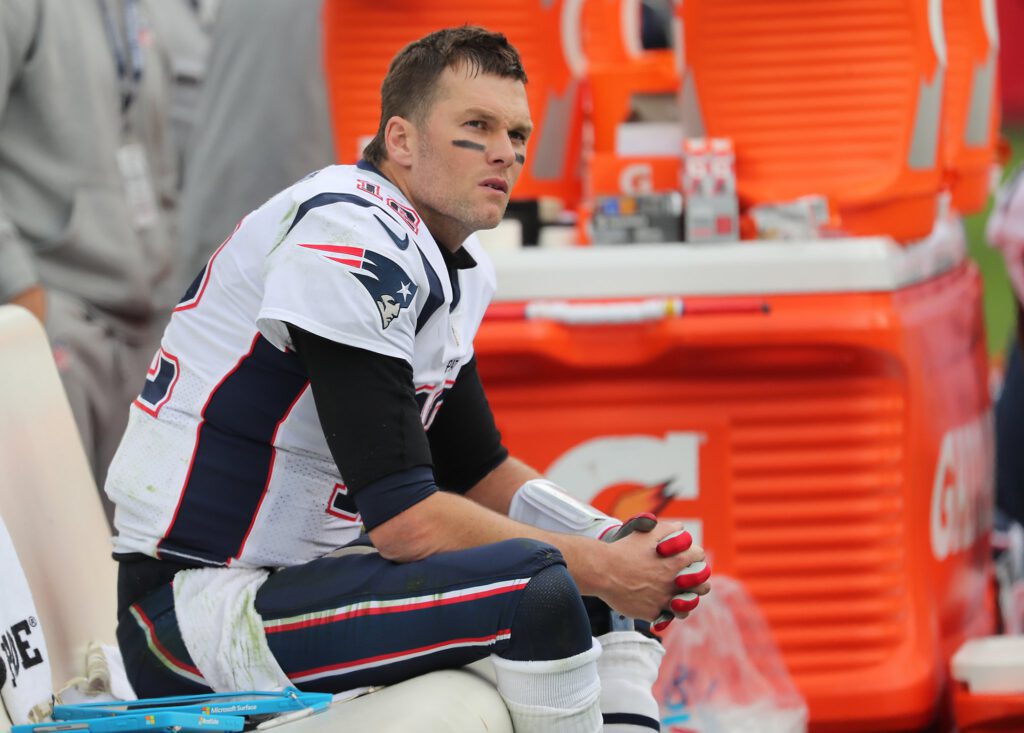 Below are a variety of advanced stats from the Patriots’ 34-10 loss to the Titans on Sunday.

There was a lot to digest from Brady’s performance in Tennessee, but what exactly went wrong for the three-time MVP?

Let’s start with Brady’s considerable dip in efficiency throwing outside the numbers against the Titans defense.

On Sunday, Brady completed nine of his 16 passes for only 69 yards on throws outside the numbers, which equates to a passer rating of 66.9 and a lowly 4.3 yards per attempt.

There are multiple reasons why Brady struggled on throws to the perimeter, but the two main issues were that he forced some throws and wide receiver Josh Gordon was unable to win a few contested catch situations.

Here’s a good example. The Patriots have one of their common route combinations on at the top of the screen. Edelman runs vertically out of the inside slot to create a rub on the linebacker which gives James White some space in the flat with the Titans in man coverage. However, Brady goes to a one-on-one matchup with Gordon on the weak side of the formation along the sideline. Brady throws a jump ball to Gordon, and the ball is thrown in a good spot, but Gordon can’t haul it in for the reception. We’ve seen Gordon make tougher catches than that, but it was also a low-percentage shot by Brady instead of taking the easy yards with White.

The other issue that Brady had on Sunday, which is becoming a reoccurring theme this season, was throwing while under pressure.

The Pats quarterback completed only two of his eight pass attempts for 22 yards while under duress. He also threw four passes away and had a passer rating of just 39.6, meaning he could’ve spiked the ball eight times in a row and had the same rating.

One issue continues to persist for Brady, and that’s a tendency to throw the ball away instead of getting to his check down.

On this play, Brady goes through his read at the top of the screen before chucking the ball into the second row, and never looks to his check down, James White, at the bottom of the screen. In years past, we’d see Brady calmly stand in the pocket under pressure and find White in the flat as the pocket collapses around him. This year, he’s bailing on the play more than usual when he feels the pocket collapsing around him.

We’ll get to some of the other issues with the Patriots offense in the next few sections, but isolated from the play around him; those are my two main takeaways from Brady’s performance on Sunday.

Usually, Brady’s time to throw is in the section above, but this week it helps tell the story of what happened up front for the Patriots.

In all, the Titans defense pressured Brady on 11 of his 44 dropbacks, which isn’t as bad as it seemed live.

The bigger issue than the guys up front was that the Titans forced Brady to hold onto the football in the pocket, leading to a number of “coverage” sacks and pressures.

Brady’s time to throw was a sluggish (by his standards) 2.58 seconds, his third-slowest time to release this season, and a notable difference from his 2.43-second season average.

And to add some more context, consider this: Brady’s three worst performances of the season were also the three games where he had his slowest release in the pocket.

In other words, the way to beat Brady is to get him out of rhythm, and that’s what the Titans were able to accomplish.

Although the story of the game was Brady’s time in the pocket, the offensive line still had its issues.

There were some one-on-one battles lost, those happen throughout the season, but there were also some mental errors that need to be corrected.

One of those mental miscues came on Logan Ryan’s sack before the half. The Titans bring an extra rusher, but neither running back James White nor left guard Joe Thuney picks up Ryan blitzing from his boundary corner position. Both White and Thuney block the same Tennessee rusher, and when Brady steps up in the pocket, he’s met immediately by Ryan.

The Patriots offensive line is not free of blame, but in a game script that demanded the Pats to throw the football 44 times, the coverage was a bigger deal than the breakdowns along the offensive line.

In the slot, the Patriots had success despite the overall failures of the offense.

Patriots wideout Julian Edelman averaged a solid 2.03 yards per route run out of the slot, and wide receiver Josh Gordon had two big receptions from inside the numbers.

On Gordon’s 44-yard reception, the Patriots got the big wideout open against zone coverage by sending him up the seam from a slot position. By moving him inside, Gordon got a favorable matchup against a linebacker trying to run with the former Pro Bowler down the field, an easy win for Gordon.

Although the offense struggled as a whole, Brady still averaged 10.3 yards per attempt with a 100.5 passer rating on passes between the numbers.

The New England defense only pressured Titans quarterback Marcus Mariota on eight of his dropbacks, and although they focused on containing the athletic Mariota, no plan completely eliminates the pass rush.

“Quite obviously, the game situation has a lot to do with that,” Patriots head coach Bill Belichick said of his team’s inability to create pressure on Mariota. “When they’re ahead, they can play an offense that is more balanced or maybe even a little more favorable to the run, and there were fewer opportunities, and certainly less predictable opportunities, because of the scoring situation and vice versa.”

Although game situation played a role, Belichick acknowledged that the Patriots didn’t make the most of their opportunities when they had a chance to get after Mariota.

Among those was Patriots defensive end Trey Flowers who had his worst performance of the season on Sunday.

Flowers, after generating nine total pressures against Green Bay, didn’t register a single disruption on Mariota despite rushing the passer on 24 of his snaps.

Both Clayborn and Butler aren’t known for their run defense and had issues in the past with containing quarterbacks that can scramble.

Flowers’ inability to generate pressure combined with game script and personnel usage led to the Patriots’ issues in the front seven on passing downs.

In the secondary, much like in the front seven, one of the Patriots’ best defenders had his worst performance of the season.

The Patriots played more zone coverage than usual against Mariota so they could keep their eyes on the quarterback, and that put Gilmore in some difficult situations.

On Davis’ first catch of the game, a 24-yard reception, Gilmore is in a match zone on the perimeter with the Titans wideout. Mariota does a fantastic job of stepping up in the pocket and threatening to run, which gets the Pats linebackers to move up, and Davis breaks his route off over the middle to get away from Gilmore’s coverage.

On Davis’ touchdown catch, he beat Gilmore on a double-move out of the slot. Davis stops down to fake an inside release, which gets Gilmore moving in the wrong direction, and due to terrific ball placement on the throw by Mariota, Gilmore is unable to recover in time to prevent the touchdown.

We’ve sung Gilmore’s praises all season, and deservedly so, but Davis and the Titans took advantage of single coverage and got the better of Gilmore on Sunday.