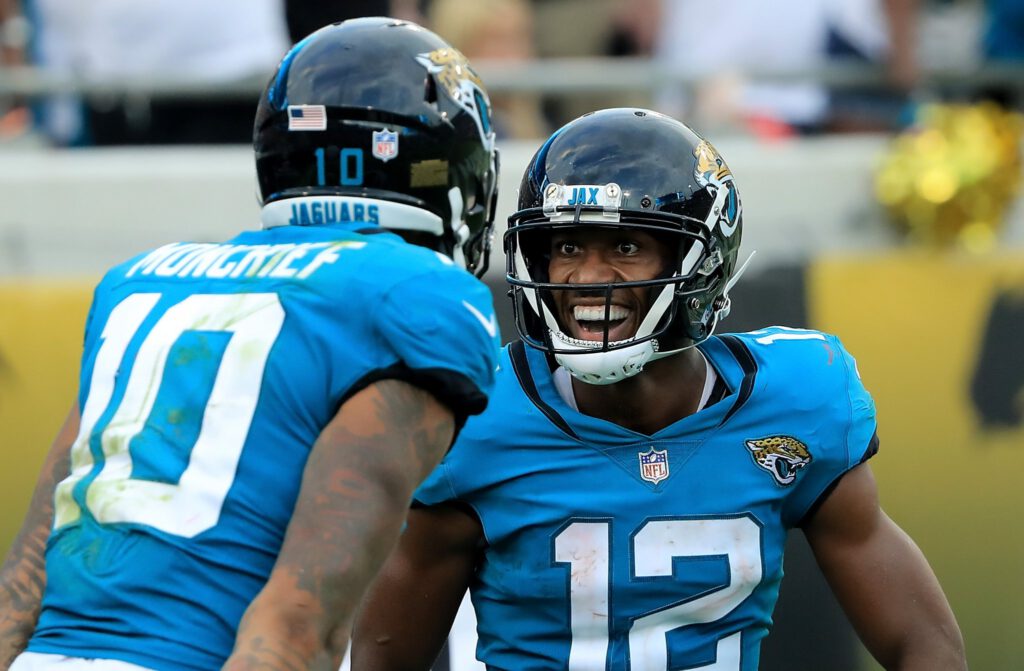 Below are a variety of advanced stats from the Patriots’ 31-20 loss to the Jaguars in Week 2.

As you’d expect against the Jaguars defense, it was a tough day throwing the football for Patriots quarterback Tom Brady.

Brady completed only three passes of ten or more yards, as the Jags forced him to chip away on the underneath stuff for most of the day.

In the wake of the Josh Gordon news, it’s worth noting that Brady has only completed three passes of 20 or more air yards through two games, and all three came against the Texans last week.

Gordon should help the Patriots and Brady stretch the field, something they haven’t been able to do through the first two weeks of the season.

Moving onto Brady’s time to throw numbers, the Pats quarterback once again had a quick release at 2.33 seconds (time to throw = snap to release).

Brady’s ability to get rid of the football over the last two weeks has played huge dividends for the offensive line that has been under fire going up against two of the best defensive fronts in the NFL.

Speaking of the offensive line, although the strip-sack of Brady on a pressure allowed by right tackle LaAdrian Waddle was a back-breaker, the big guys up front did an amicable job protection Tom Brady in a tough matchup.

However, although he was responsible for four hurries of Tom Brady, left tackle Trent Brown didn’t allow Jags defensive end Yannick Ngakoue to touch Brady. There were some ugly reps for Brown, most notably on the first play of the game for the Pats, but against one of the league’s top sack artists, he held his own.

In all, Brady was only pressured on 12 of his 38 dropbacks, which had a lot to do with Brady’s quick release, but also is a testament to a solid job by the guys up front against a terrific Jaguars pass rush.

One of the bright spots of this game was Chris Hogan’s ability to create some separation out of the slot.

Last week, Hogan ran 20 snaps out of the slot and failed to haul in either of his two targets.

This week, Hogan once again ran 20 snaps out of the slot and hauled in all three of his targets from inside the numbers for 42 yards and two touchdowns.

Hogan’s touchdown to get the Patriots within two-scores of the Jaguars was a beautiful site to see as he ran away from Jacksonville’s top corner, Jalen Ramsey. Hogan threw a nice head/shoulder fake at the top of the route at a solid pace to shake Ramsey.

Although the Patriots ultimately lost the game, it was a good sign that Hogan was able to find some openings in the Jaguars defense.

On the stat sheet, I was shocked to see that the Patriots pressured Jags quarterback Blake Bortles on 19 of his dropbacks.

The issue wasn’t generating pressure, as the Pats accumulated 21 hurries as a team (some came on the same play), but rather the lack of finishing by the Patriots pass rushers.

The Patriots only hit Bortles three times, and none of those quarterback hits led to a sack.

In many ways, the Patriots’ pass rush output resembled what we saw last season; they were able to hurry the quarterback but the disruptions seldom led to anything substantial, and Bortles escaped the pocket with his legs on three critical third-down conversions.

In the run game, the Patriots struggled to get the Jags’ top running back on the ground as T.J. Yeldon averaged nearly six yards per carry (5.8).

However, defensive lineman Lawrence Guy did pace the Pats with five run stops and continued his strong start to the season.

Nobody on the Patriots defense played well enough on Sunday, but Guy was one of the bright spots.

The coverage stats from this one are about what you’d expect: ugly.

Bortles torched the back seven of the Patriots secondary for 377 yards, and there was plenty of blame to go around.

From this perspective, the biggest problem for the Patriots defense was allowing far too many yards after the catch.

In all, the Patriots defense allowed 212 yards after the catch on Sunday, which was tied for the most in a single-game of the Belichick era.

The issues with allowing YAC was summed up nicely by head coach Bill Belichick on his conference call this morning.

Belichick told me, “overall we have to do a better job of playing with leverage and tackling and using our help and getting the runner on the ground.”

To the Jaguars credit, they have some speedy receivers that are excellent after the catch.

But the Patriots didn’t take a team approach to bring those guys down, and lost leverage far too often which led to one-on-one situations in space rather than forcing players to their help to make a group effort on the tackle.

That, combined with the breakdowns on crossing and pick patterns, opened the floodgates for the Patriots passing defense in this one.