After A Gut-Punching Bengals Loss, It’s Wise To Believe In Roster, Not Judge Result

Bengals own up to self-inflicted wounds in 23-20 OT loss. "No one's freaking out." 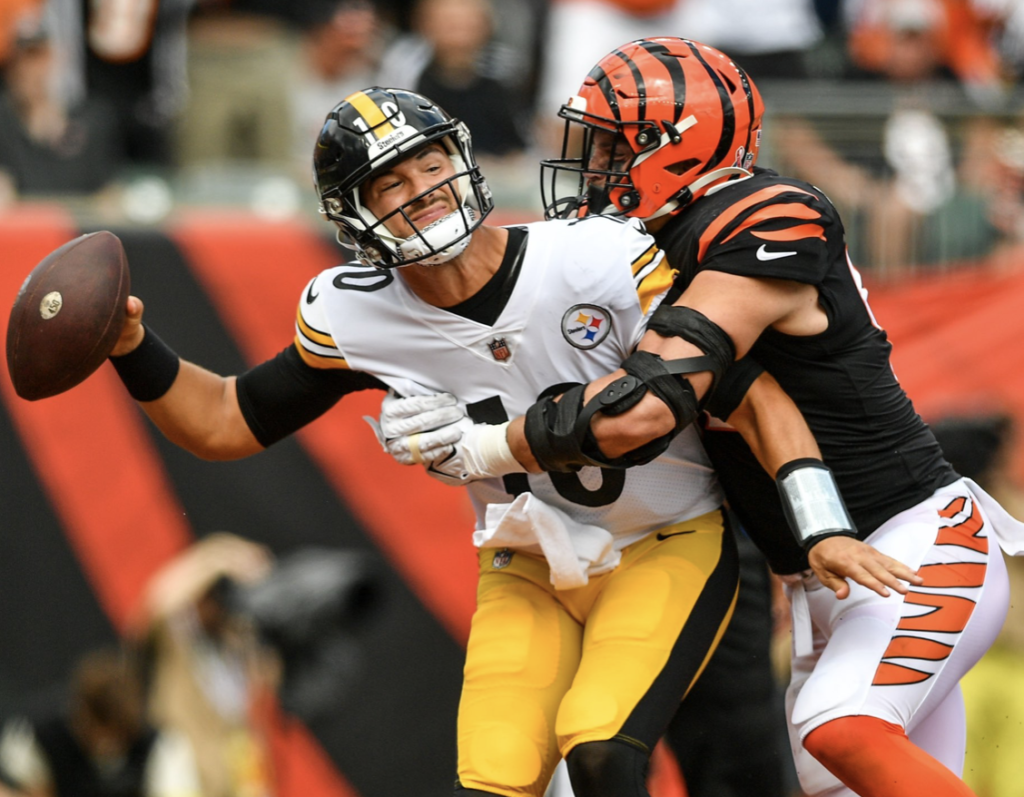 CINCINNATI — Anyway you look at Sunday’s 23-20 overtime loss to the AFC North rival Pittsburgh Steelers, it was a gut-punching loss filled with second-guessing and regret.

The regret was easy. That happens when you commit four first-half turnovers and five for the game and gift the opponent 10 of their 23 points.

Joe Burrow looked like the quarterback that didn’t take a snap the entire preseason and was off his timing on throws in the first half, like safety Minkah Fitzpatrick’s pick-6 from 31 yards out on Cincinnati’s second offensive snap of the season.

The offensive line looked like a group that had never played a regular season game together. There were missed assignments and missed blocks that led to seven more sacks of the quarterback who was supposed to see immediate improvement in his protection.

Well, when your long-snapper goes out with an injured right biceps midway through, and you have a back-up who normally plays tight end you should count on things not going as smoothly. They didn’t. Fitzpatrick came through and blocked the extra point that would’ve won the game for Cincinnati, 21-20 after Burrow fired a six-yard dart to Chase for the game-tying TD with two seconds left.

The snap wasn’t as clean as the Bengals have come to expect, and that’s not to blame Wilcox. That’s just reflective of why Clark Harris is considered so good at his job. Should the Bengals, with the game tied, just tried a two-pointer to win it?

In overtime, the Bengals had a chance to win the game but Wilcox snapped high on a 29-yard attempt by Evan McPherson. The laces were what McPherson kicked in pulling it wide left.

If you’re looking for another positive from the Bengals, there was complete and sincere ownership. McPherson wasn’t about to blame the laces in or a high snap as a reason for pulling the ball wide left.

“You always hate when a teammate goes down, especially when it’s a valuable member of your team like Clark,” McPherson said. “But honestly, I had full trust in Wilcox. There was no reason to miss anything. I put everything on me. I’ll grow from it, learn from it and move on.”

Could the Bengals have not kicked on third down and just decided keep the ball in Burrow’s hands and go in for the touchdown? Should they have? Should Kevin Huber have just downed the ball and tried again on fourth down on the high snap? Easy to say yes to all of those after the fact.

But once you get past the hand-wringing and frustration over five turnovers and an overtime loss that puts you alone in the AFC North basement at 0-1, one needs perspective.

Many teams have started 0-1 and recovered to not only win their division but the Super Bowl. It’s not the end of the world.

So, here’s some advice to Bengals fans everywhere: Believe in the roster. Ted Karras does, even after one error-filled game from Joe Burrow that featured five turnovers by the quarterback and a career-worst four interceptions.

“Joe’s a beast,” Karras said. “We did what we needed to do to get back in this game with several chances to win. No one’s freaking out. No one’s thinking anything else other than we lost today. Everyone has their own things they wish they had done differently, especially after a loss as dramatic as that. No, Joe’s awesome. Did a great job today and it didn’t go our way.”

Tee Higgins went out in the first half with a concussion. Clark Harris is likely done indefinitely with a biceps injury. But this roster is still loaded. Evan McPherson set a club record with a 59-yard field goal and is still setting a career path to be the best and most reliable kicker in team history. Joe Burrow engineered a key drive under pressure when the team needed it.

The defense had big play after big play, highlighted by their three-and-out under the two-minute warning when they forced another Steelers punt and giving the Bengals 87 seconds to tie the game.

What the Bengals showed on defense was incredible tenacity from start to finish. The first drive of the game was a stop by Eli Apple on third down that forced the Steelers to punt.

“Our defense played lights out,” La’el Collins told me. “Played a helluva a game and we should’ve answered the bell a lot more, put more points on the board.”

Lots of ownership from Mitch Wilcox and La'el Collins in Bengals locker room. "Our defense played lights out and we (offense) should've answered the bell a lot more." pic.twitter.com/UwuskwB2FL

Good teams lose games. Sometimes those games come in the opener. Great teams can lose their first game. Super Bowl winners have lost their first game. Why? Because as every coach will tell you, they don’t really know what they have until they play one or two or even three games.

Coaches on great teams believe in the players on their roster to make big plays at big moments. Burrow did that on his second drive of the second half, throwing a third-down seed to Tyler Boyd for the first touchdown. With no margin for error on the last play of the game, Burrow made another big play.

The Bengals lost a game Sunday they almost won in miraculous fashion. No team has any business winning a game when you lose a turnover battle, 5-0.

“We had our chances,” Zac Taylor said. “To lose the turnover battle five to nothing, to have kick operations ruined on two kicks that both would have won the game is disheartening in that way because I thought we would have handled those situations better. But I thought our guys really fought back and gave us a chance. I thought the defense played solid all day. We would have liked to get a turnover, but really they held them to 13 points until that last field goal. That’s a pretty good day’s work in the NFL.

“So, just didn’t do enough as a team to overcome some of the adversity that we put ourselves in, didn’t find a way to make a play at the end that would have won it, and that’s life. We’ve got 16 more of these, and we’ll turn around next week and start getting ready for Dallas and try to gain some momentum that way.”

What’s the true meaning of Sunday’s loss going forward? Road games in Dallas and against the Jets should offer the best kind of perspective in the form of a response.