After this season, Brad Stevens should never again feel ‘inadequate’ around Bill Belichick 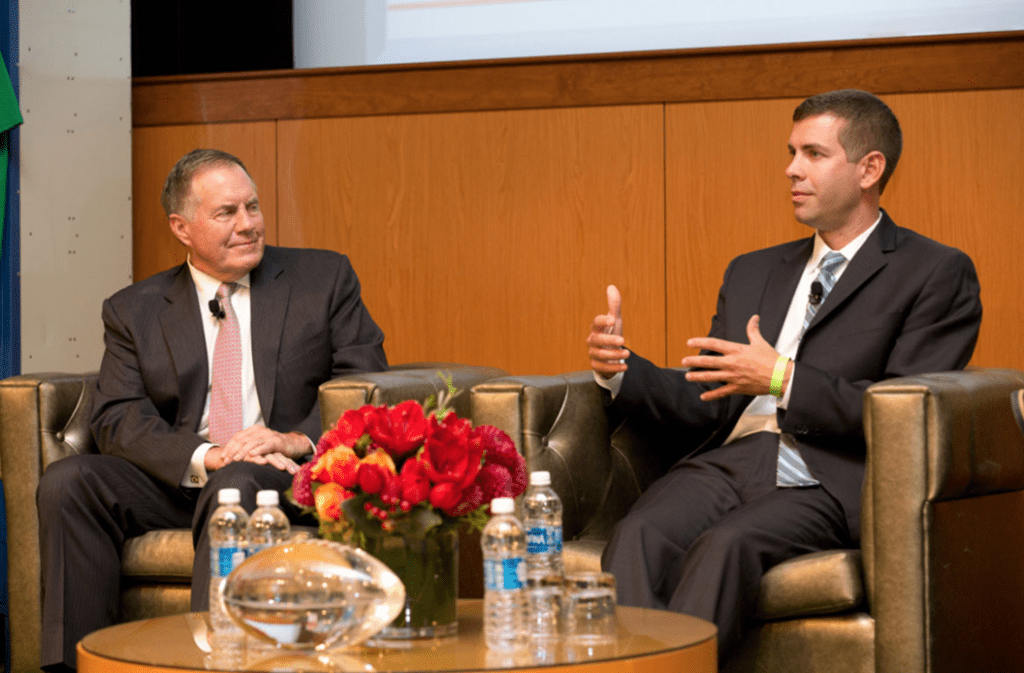 If this NBA season has proven anything, Brad Stevens is the best in the business right now.

The Celtics have had a cataclysmic number of injuries, losing their prized free agent five minutes into the season and their superstar point guard coming down the stretch. In between, he’s been without Jaylen Brown, Marcus Smart, Daniel Theis and Marcus Morris.

They’ve lost Al Horford and back-up Shane Larkin for stretches. Through it all, Stevens hasn’t blinked, and neither has his team. Stevens convinced his team of this: You can’t control injuries, only the way you respond to them.

The Celtics completed a stunning four-game Western swing sweep in Utah Wednesday with a starting lineup of Terry Rozier, Jaylen Brown, Jayson Tatum, Guerschon Yabusele and Aron Baynes, finishing with a Brown dagger in the heart of Jae Crowder and the Jazz, and improving to 52-23 in the process. They stand just three games behind the Raptors in the Eastern Conference. It’s still unlikely the Celtics will catch Toronto but the mere fact that this is still a relevant conversation with nine games remaining is astounding.

The Celtics have Toronto at home on Saturday night at TD Garden and if they somehow steal that game and a game in Toronto on Wednesday, they actually might do the next-to-impossible and finish first in the East.

If, and that is a monumental IF, that happens, you’re looking at the greatest regular season coaching job in Celtics history. That’s not hyperbole. That’s just common sense.

Remarkable coaching performances are nothing new in Boston. Terry Francona ended a curse and was amazing to watch for eight years (2004-11). Claude Julien won a Stanley Cup and nearly another in 2013. Doc Rivers had his team buy completely into Ubuntu in 2008 and for the five years after that, producing Banner 17 and a near-miss in 2010. What Bruce Cassidy is doing with the Bruins this year could put him in this class if Boston reaches the Cup finals.

And then there’s Bill Belichick, very arguably the greatest professional head coach in American sports history. His five Super Bowl wins and eight Super Bowl appearances with the Patriots speaks for itself. His run of consecutive double-digit win seasons (15 and counting) might never be matched again in NFL lore. Boston fans have been beyond spoiled with not just the winning but the remarkable leadership these franchises have found on the sidelines.

Obviously, what matters in Boston are banners and not regular season finishes. Stevens was keenly aware of that when he held his introductory press conference in 2013. So, why not go straight to the man who has mastered coaching in New England better than anyone? With the help of Patriots offensive coordinator Josh McDaniels, that’s exactly what Stevens told NFL Network’s Cynthia Frelund he did.

“I got to know Josh really well,” Stevens told Frelund. “Josh was kind of my conduit in there and so I’ve watched him go through all the quarterback work and all the stuff they do on the offensive side of the ball. And then to get a chance to spend time over there, it’s been really helpful.”

“When you walk out of there, you feel inadequate as a coach because their culture, they way that they move from drill to drill, how they pull together and how connected they are, it’s special. And it does not happen everywhere.”

No, Brad it certainly doesn’t. But it’s happening with the Celtics before our very eyes. Yes, Stevens has yet to win a title or even reach The Finals but his team and his culture seems charted on a course that is destined to produce Banner 18.

“As much as I can,” Stevens said. “You spend a lot of time with people you think you can learn from, and so I have taken advantage of going over there on a number of occasions, whether it’s sitting through OTAs or practices or meetings, whatever the case may be.”

Everyone knows that but stand back for a moment and consider what this team has been through. Stevens has convinced every single player on his roster to buy into his methods with a purpose.

This is certainly a team that could’ve mailed it in when they were essentially locked into the the No. 2 seed two weeks ago. This was a team that had every right to rest up mentally for the grind that awaits them in mid-April, likely without their star point guard.

If there were any doubt before, the way the Celtics have played the last two weeks should have washed any skepticism into Boston Harbor: Brad Stevens has easily done the most remarkable job from start to finish in the regular season of any NBA head coach.

Brett Brown clearly deserves high marks for getting his young Sixers team to buy into defense and determination in the face of expectation and the Markelle Fultz drama he dealt with all season. Incredibly, they are bearing down on Cleveland for the No. 3 spot in the East. Gregg Popovich said he couldn’t think of anyone other than Brown that could’ve done a better job with a young team. And Dwane Casey (Raptors) and Mike D’Antoni (Rockets) have their teams atop their conferences.

But Stevens all season has had a Belichick-like focus to his purpose and to the constant message he has delivered to his team. Worry about the job in front of you and nothing else because nothing else matters and there’s nothing you can do about it anyway.

“The one thing that the Patriots have always been great at is they don’t beat themselves, and they pride themselves on that,” Stevens said. “I think that, plus the idea of doing your job and the idea that everyone has a role to play and being a superstar in your role, those are all things coaches are talking about all the time. They just do it better than everybody else.

“That’s the bottom line, which means that it’s a constant theme, it never ends. It’s always talked about. It is something that is always harped on and it’s a fabric of who they are, not just something that’s on their wall. And that stands out when you’re over there.”

If Bill and Linda take a trip to the Garden this April for the playoffs and sit court-side, they’ll see something very familiar: A coach on the sideline in complete control of a team that believes in everything their coach is telling them.