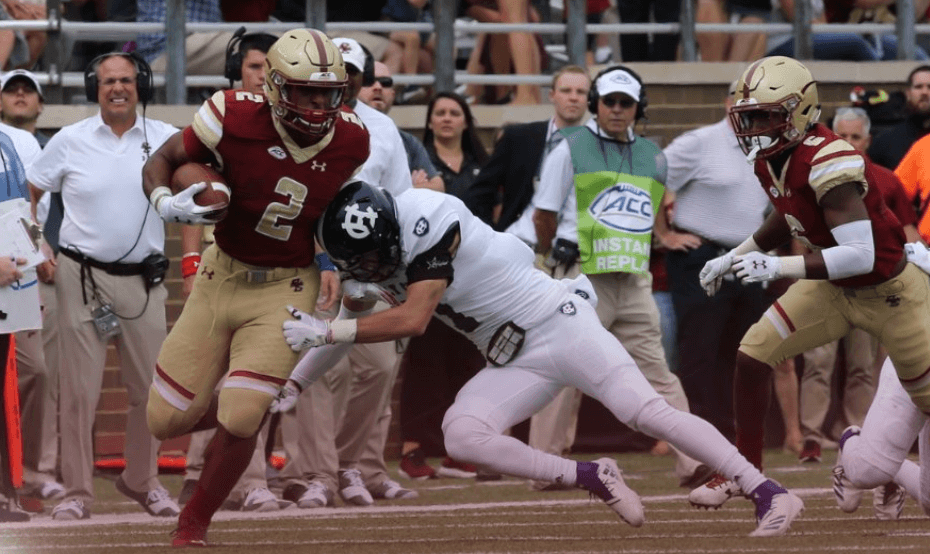 This week was a bit different in that Holy Cross actually brought a legit fan base with them as part of the 40,311 to watch the 62-14 carnage at Alumni Stadium. Meeting for the first time since a 56-26 Boston College win at Worcester’s Fitton Field in 1986, the two longtime rivals renewed acquaintances for the 83rd time.

Saturday’s win combined with the Week 1 55-21 win over UMass marked the first time in school history Boston College has scored over 50 points in its first two games. Holy Cross’ biggest plays on the day came on special teams, scoring both touchdowns on blocked punts.

The Eagles went over 600 yards offense, totaling 610 yards on 72 plays while holding Holy Cross to just 194.

Boston College made sure, with their ACC opener on the road against Wake Forest this Thursday night, to put this game away in the opening minutes. Last week Anthony Brown made sure to step on the gas early. This time it was All-American running back A.J. Dillon. He needed just six carries to pile up 149 yards and three touchdowns. That was his day’s work.

On two of his TD runs, he was completely untouched, running off the left side for seven yards and off the right, also for a seven-yard score. On the third, he stiff-armed an overmatched Holy Cross defender and did a toe-tapping dance down the right sideline at midfield before following an escort for a 74-yard score.

Anthony Brown didn’t even get a full quarter’s work, as Andover High’s EJ Perry relieved him on the final drive of the first quarter. Brown, after last week’s efficient performance, threw just two passes, completing both for 43 yards.

Perry hit Ben Glines for 17 yards and his first career touchdown five minutes into the second quarter to make it 28-0.

Another NFL prospect wearing the No. 2 for BC – defensive end Zach Allen – also had a big first half. He disrupted everything Holy Cross attempted in the middle of their offensive line. As a result, the Crusaders only first down in the first 29 minutes of the first half was the result of a neutral zone infraction.

When Holy Cross finally did threaten and convert their first offensive first down, disaster immediately ensued. Two plays after quarterback Emmett Clifford hit Richie DiNicola for 15 yards to the BC 25, Clifford attempted an ill-advised out for receiver Blaise Bell. Hamp Cheevers stepped in front and picked the pass clean and returned it 81 yards for the TD. Last week again UMass, it was Lukas Denis taking it 59 yards to the house for the touchdown and a 48-7 lead on the last play of the half. This week, it resulted in a 34-0 advantage at the break.

The Eagles made it 41-0 early in the third on a 1-yard run on fourth down by Davon Jones off left tackle, capping a 10-play, 67-yard march. EJ Perry’s second touchdown pass of the day was a 33-yard post pattern to CJ Lewis, making it 48-0.

Holy Cross avoided the shutout with 1:38 left in the third quarter when Spencer Gilliam blocked a Grant Carlson punt at the BC 32. Cristos Argys was on the spot to pick up the block on the fly and race the distance for a touchdown.

The third BC quarterback of the day, redshirt freshman Matt McDonald, connected for his first touchdown pass of his career when he found Hunter Long on a 35-yard fly pattern on 4th-and-5 on the first play of the fourth quarter, making it 55-7. Then, with 11:00 left in the 4th, BC’s special teams collapse again, Gilliam recovered the second blocked punt of the day in the BC end zone for another Holy Cross TD.

The Eagles answered that immediately when McDonald hit Jordan Williams for a 65-yard TD down the right sideline and Holy Cross could wrap up on the tackle.

Say this for Holy Cross, their fans traveled in force for this game. pic.twitter.com/DyhlNNizDr