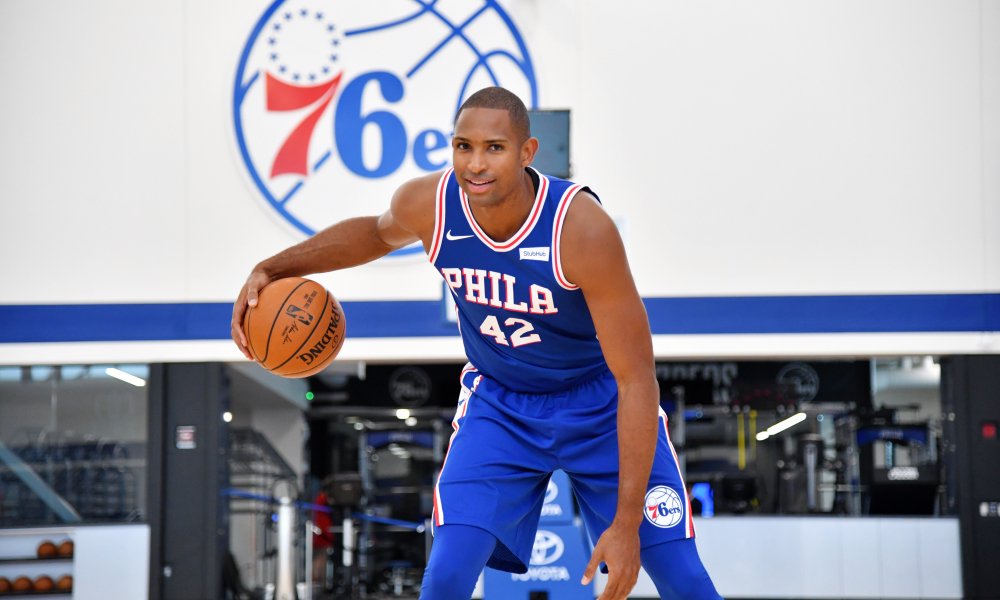 CAMDEN, NJ - JULY 12: Al Horford #42 of the Philadelphia 76ers shoots around on July 12, 2019 at the Philadelphia 76ers Training Complex in Camden, New Jersey. NOTE TO USER: User expressly acknowledges and agrees that, by downloading and/or using this photograph, user is consenting to the terms and conditions of the Getty Images License Agreement. Mandatory Copyright Notice: Copyright 2019 NBAE (Photo by Jesse D. Garrabrant/NBAE via Getty Images)
Share
Facebook Twitter Email

For the first time since becoming a member of the Sixers, former Celtic Al Horford offered some perspective on what factored into his decision to head to the city of Brotherly Love.

After spending three seasons with the Celtics, Horford expectedly opted out of his four-year deal with Boston but decided to sign with the Sixers instead of restructuring his contract with the Celtics — something most expected was going to happen next. Instead, the veteran big man who anchored Brad Stevens’ defense bolted towards Philly, where he believes is the best place for him at this point in his career, he told Steve Bulpett of the Boston Herald.

“Well, after last year ended, we were all disappointed with how everything went,” Horford said. “I took some steps back, looking at what direction the franchise was heading and what was going and we all kind of felt that Kyrie (Irving) was going to leave. It was like, maybe he’ll stay, but then it was, nah, he’s probably going to leave just based on how everything was. And then I’m looking at my career and myself and the years that I have left. There were certain things that we wanted to accomplish as a team and things that we needed to make that happen.” [Boston Herald]

Entering the 2018-19 season, expectations were higher than ever for Stevens and the Celtics — a team fully loaded with Kyrie Irving and Gordon Hayward, both respectively back into the fold from their season-ending injuries — but instead Boston was bounced out of the second round of the playoffs by the hands of the NBA’s MVP and the Bucks. Horford, 33, said he wasn’t sure if staying in Boston was best for his chances of capturing a championship and couldn’t come to an agreement with the Celtics brass over a new deal.

“We got all those pieces last year, but it didn’t happen for us, and moving forward I didn’t know if it was going to be a two-year wait or whatever it was going to be,” Horford added. “It was that and the financial reasons. When we started with the team trying to come up with things and we couldn’t agree on certain numbers, that’s when I decided, you know what, I’m going to have to open my free agency. I believe not only that I am worth a certain amount of money, but also I want to be in a position that I have a really good opportunity to win now. You know, my window is now. That’s how I feel.”

The Sixers came knocking at Horford’s door shortly afterward with a four-year, $109 ($97 million guaranteed) million offer in hand. Not knowing which direction the Celtics were heading towards only made matters worse.

Would Horford have made a different decision if he knew Irving wasn’t going to leave Boston for the Nets?

“I’m not sure that has anything to do with it for me,” Horford said. “I just think that if Kyrie would have stayed, I don’t know if it would have worked. There would have had to be some major changes as far as players because it was just clear that the group that we had just wasn’t going to be able to coexist.”

Horford admitted that he would have considered staying in Boston if he knew Kemba Walker was on the way. However, Celtics president of basketball operations Danny Ainge would have had a hard time inking Horford and the All-Star point guard. Looking back, it’s hard to predict how things would have unfolded.

Horford and the Sixers will welcome the Celtics at Philadelphia for the season opener on October 23.