"(Horford) looked kind of young today," Jayson Tatum said after Al poured 17 points, 10 rebounds and a trio of blocks and steals over Houston. 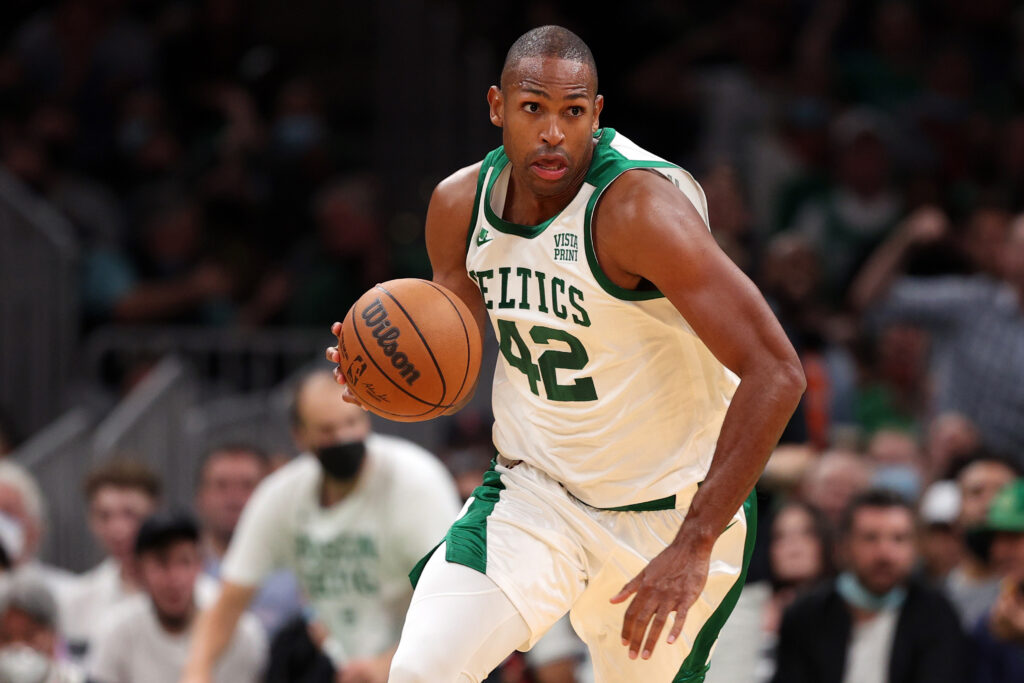 BOSTON, MASSACHUSETTS - OCTOBER 22: Al Horford #42 of the Boston Celtics dribbles downcourt during the Celtics home opener against the Toronto Raptors at TD Garden on October 22, 2021 in Boston, Massachusetts. NOTE TO USER: User expressly acknowledges and agrees that, by downloading and or using this photograph, User is consenting to the terms and conditions of the Getty Images License Agreement. (Photo by Maddie Meyer/Getty Images)
Share
Facebook Twitter Email

When the Celtics’ new GM Brad Stevens pulled off the Al Horford trade, leveraging his first-round pick, a Sam Presti relationship and Horford’s desire to return to Boston, it appeared to be a fair swap. Aging star for aging star, both limited in the games they played last season. The Celtics only threw a first-round pick due to significant contract differences between the two players.

Kemba Walker never played for the Thunder, accepting a buyout that leaves Oklahoma with $53.6-million in dead money over the next two seasons. Houston used Boston’s No. 16 overall pick instead, the Thunder flipping it for a heavily-protected future Detroit selection, and selected Alperen Şengün. Horford lined up against Şengün in the decisive stretch of the Celtics’ win over the Rockets, schooling the 19-year-old and looking like he never left Boston with 17 points, 10 rebounds, three blocks and three assists.

Horford struggled to shoot on Friday, but in the third quarter utilized his size and footwork in mismatches to draw touch fouls in the bonus. He shot 8-for-9 at the free throw line, attempting nine at the stripe for the first time since Game 5 of the east quarterfinals between Boston and Milwaukee. His 11 fouls (5.5 per game) drawn through the Toronto and Houston contests are tied for 15th in the NBA, slightly above Kevin Durant.

The Celtics wanted to build a more veteran team and Horford became the centerpiece of that movement. He earned a vet’s whistle operating in the post, one maybe Grant Williams wouldn’t have received in that same position. Ime Udoka, with a second chance to coach Horford after he felt Philadelphia underutilized him, is now attacking smaller wings with Horford post-ups the Celtics used conservatively in recent seasons.

Shooting and double-digit scoring seemed obvious benefits of bringing Horford back, along with his ability to play the wing and center. It was unclear just how comfortable he’d look switching onto the perimeter though. He stayed with Jae’Sean Tate for an early block, recording seven in two games despite playing a more perimeter-based style next to Robert Williams III. Stevens hadn’t hired Udoka yet, but likely had switching in mind in reacquiring Boston’s big man, once and still one of the most comfortable at defending on the perimeter.

Udoka also made Horford a fixture of his pace emphasis for the Celtics, making it clear early they’d utilize his ability to dribble into the front court and make sharp outlet passes. Horford isn’t a blur on the fast break, but on Friday blew by Kevin Porter Jr. and Houston’s defense after sneaking a quick left hand following Şengün’s up-fake attempt to grab one of his three steals. He finished a three-point play that ended any chance the Rockets could come back and win in the fourth.

Horford posted a game-high +18 in 30 minutes in a 10-point Celtics win after playing 25 in his return from COVID-19 Friday against Toronto. He received a loud roar from Boston’s crowd in pregame introductions, with fans this time appreciative of the width of impact Horford provides a team that needed so many of the things he brings one year ago. Passing, shooting, positional versatility, defense, size, length, pace and screening.

The only concern would be the Celtics’ over-reliance on the 35-year-old. He’ll play in back-to-backs this year, Udoka said, but alongside injury-prone Williams III and with Grant and Enes Kanter unable to fill effective backup five minutes so far, it’ll be difficult to sit Horford down. He’s questionable tonight with a left adductor strain.

Boston capsized when he left the floor in both games, as he posted a -7 in a 32-point loss to Toronto. The Celtics also saw their 20-point lead dip to 12 in the fourth on Sunday, forcing Horford back into the game to ice it one more time with a defensive play.

Having a pair of starting-quality centers able to trade rest can help for now. In the first 82-game season since 2018-19 though, a fresher-than-ever Horford is likely to hit bumps along the way with how involved he is in everything Boston does on both ends. Management will be crucial, though Udoka expressed how Horford effectively builds himself up toward the playoffs as we saw during explosive 2017 and 2018 playoff runs.

The one area Horford declined in following his departure to Philadelphia is finishing around the rim. He doesn’t get quite the same base off for his floaters, hooks and layup attempts. He can still dunk, and has in both games. Horford hit an and-one hook in the lane against Toronto, other times struggling to finish his post-up attempts with a 37.5% mark from the field, though he’s shooting two percentage points higher than he did in Philly and OKC on twos. He’s struggling outside at 1-of-9, but finished 62.5% of his threes in preseason, making that less concerning.

Elsewhere, it looks like Horford never left. His 14 points, 10.5 rebounds and 3.5 blocks per game stand in line with some of his best averages ever. His assists could tick higher, and likely will with Udoka previewing more utilization of Horford in an occasional point-style role this week. That’ll add to the list for a busy Celtics glue guy, but it’s not a leap.

Horford’s role on the defensive boards feels exaggerated, since Udoka wants him making the quick decisions for himself and others in getting the ball across half court. The difference comes when the Celtics can’t explode on the fast break and need to slow the game down, which Horford can do.

As for the pick-and-roll, the Celtics prefer to keep Horford on the perimeter early this season and will likely utilize Williams more in that area to find low-post looks for the more efficient finisher. Horford finished one rolling off Jayson Tatum, but looked more comfortable passing on the short roll. Alongside Rob, he could find him for a delayed cut here. Next to Grant, the surprising sniper gave Horford an outlet to find a three-point shooter all game on Sunday.

Horford told the media after a dominant preseason performance against Toronto he wanted to start and ultimately earned that role. Former teammate Dennis Schröder took more conciliatory approach, saying he prefers to start, but will roll with any role Udoka hands him. Offseason free agency conversations slated him for the bench, until Jaylen Brown sat Sunday’s game and gave him a spot start to replicate Brown’s role in the starting lineup. It revealed something we also saw in preseason, chemistry between the former Hawks.

Schröder and Horford connected on a preseason alley-oop and yesterday set up Horford’s lone three-pointer. When Schröder has played next to Williams III, he’s tossed up a wild lob beyond even Williams’ leaping capabilities. Schröder seems to have a better feel for Horford’s spots and it’d be intriguing to continue to see them take the floor together across rotations. Those remain a work in progress. Horford, however, is ready for anything.

“You know Al, pick-and-pop, being able to make plays and getting out in transition,” Tatum said. “He looked kind of young today.”