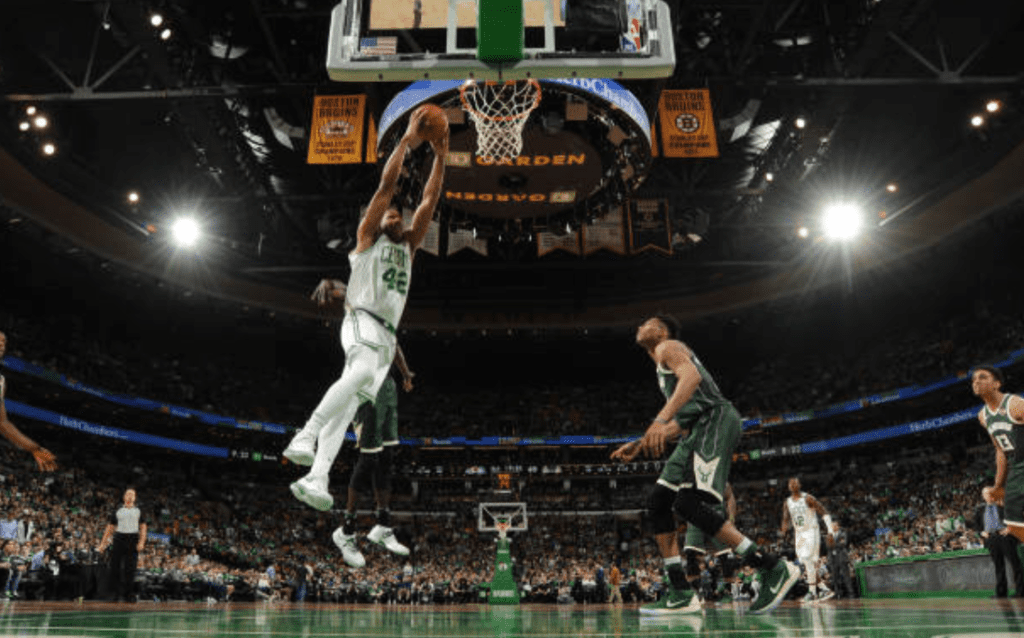 BOSTON — Al Horford wasn’t about to let another injury get in the way of the Celtics closing out the Bucks in Game 7.

The Celtics big man responded with 26 points and eight rebounds as the team’s leading scorer Jaylen Brown was hobbled with a sore right hamstring. While Brown played only 16 minutes before leaving in the first half, it was a fired-up Horford, with the help of timely second-half baskets from Marcus Morris, Terry Rozier and Jayson Tatum, who led the Celtics to a 112-96 victory and a date with Philadelphia in the Eastern semifinals starting Monday night at TD Garden. Rozier finished with 26 points while Tatum had 20.

The Celtics were able to contain Giannis Antetokounmpo, holding the Greek Freak to 22 points while Khris Middleton poured in 27.

Down 15-10 early, the Celtics grabbed control of the game when they closed out the first quarter with a 20-2 run that included a 15-0 spurt.

Eric Bledsoe, who looked in control early, lost it when he shoved Shane Larkin in the back as Larkin was driving to the basket for a layup with 32 seconds left in the quarter. Bledsoe earned a personal and a technical foul for the move.

That earned the Bucks guard “Who is Bledsoe” chants from the 18,624 as the Celtics built a 30-17 lead heading into the second quarter.

But just when it looked like the Bucks were getting ready to be blown out of the building, Bledsoe responded. He led the Bucks on a 13-2 run to open the second quarter. A 30-17 game quickly became 32-30.

The Celtics then charged back ahead, scoring the next nine points for a 41-30 lead. Horford was a beast in the first half, scoring 14 points and grabbing seven rebounds. He finished several alley-oop plays at the basket as the Celtics were able to get into the paint and drive to the basket at will.

The Celtics appeared to catch another huge break when Giannis Antetokounmpo picked up his third foul away from the basket with 5:30 left in the second quarter, as the Celtics were building their lead back to double figures. But as he went to the bench, the Bucks managed to not fold, cutting the Boston lead to eight at the half, 50-42.

Jaylen Brown limped to the locker room with just under three minutes left in the first half. He did not return with the rest of the team to begin second half warmups, instead coming out a minute before the third quarter tipped and jogging back and forth across the court to test his right hamstring.

He walked gingerly off the court and to the stationary bike next to the Celtics bench, where he remained for the first half of the third quarter before hopping off and retreating to the Celtics locker room.

The Bucks again made a run, this time to start the third quarter. This time, it was a 9-4 spurt, drawing the Bucks to within three, 54-51. But the Celtics answered again, building the lead back to double figures at 74-63. This time, it was Terry Rozier answering the bell.

Marcus Morris hit a three and that was followed by a Tatum trey with 1:05 left to give the Celtics their biggest lead at 81-65. Boston settled for an 81-67 lead heading into the fourth as the team announced the Brown was available to return, if needed.

To cap off the night, with just over six minutes left, the Garden video board flashed a taped tribute to the Celtics from the real Drew Bledsoe and then switched to a live shot of Patriots owner Robert Kraft and a laughing Celtics owner Wyc Grousbeck.