Al Horford hit six threes and is hitting nearly half of his attempts from three as a floor spacer in Joe Mazzulla's offense. It's been an adjustment for the big man. 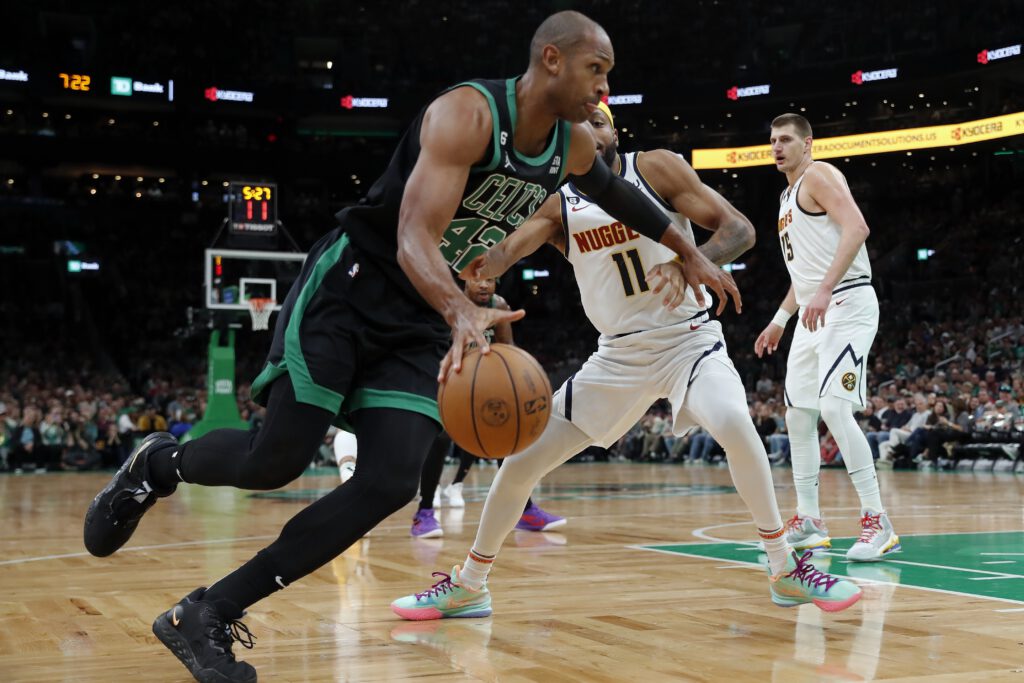 BOSTON — Al Horford pulled Marcus Smart aside after a foul on the floor in the first quarter and whispered something before they met at the right elbow. Smart set a down screen for Jaylen Brown on Kentavious Caldwell-Pope, while Horford screened him high, popping out while the Nuggets collapsed, catching a pass from Derrick White and burying a three.

Horford — beginning year 16 in the NBA at 36 — prepared for extra minutes over the summer in a fast-paced offense while filling a more physical role defending fives. He didn’t know what to expect from Joe Mazzulla though, growing impressed with the interim head coach in training camp after Mazzulla’s preparation for the Heat series caught his eye in the playoffs.

Mazzulla instituted an offense filled with cutting, off-ball screening and layers of playmaking that’s emerged as the No. 1 unit in the league by far. In it, Horford almost exclusively shoots threes, with the big man burying 6-of-8 to improve to 47.8% from three this season in Boston’s 131-112 win over the Nuggets on Friday.

“It’s been a big adjustment and that’s something that we looked at and I understood that I needed to work on it even more, be more comfortable and we really worked at it this summer,” Horford told CLNS Media. “Mentally, I’m getting in that mindset of I’m shooting more threes and that’s just what it is. The game continues to change, and for me, it’s just trying to find a way that I can change too.”

Horford attempted 46 of his first 77 field goals, nearly 60%, from three this season as the Celtics stress spacing above all else. Mazzulla constantly points players to different locations on the floor from the sideline. The Celtics attempted a league-high 47% of their shots from deep over the first 12 games, posting a 58.1 eFG% that overwhelmed the Nuggets, who entered shooting 57.1% themselves in that category.

Plays like Horford and Smart’s aren’t always orchestrated since Boston doesn’t play out of many stoppages. They want to run the floor in transition and go with the flow. Horford, White, Smart, and Jaylen Brown have set ample off-ball screens to create misdirection that frustrated Dwane Casey’s Pistons on Wednesday. Two days later, Horford faked again like he’d pop into a three-point look, dribbled downhill and found White for three.

“We’ve been asking Al to play the five a lot in spots, last year, he played the five, but more so the four with Rob out there,” Brown told CLNS. “He’s made an adjustment to be the five and be not only a screen setter, but also a paint protector. We’ve asked him to do a little bit of everything this year. We’re all adjusting, but Al has been adjusting well.”

Later, he set up pick-and-pops for Tatum, the first play swung to Brown instead, who used a pump fake of his own to bend the defense, drove and found Horford for three to effectively squash a Nuggets rally. The Bulls, Grizzlies and Nuggets all poured in offense on a Celtics defensive unit that continues to struggle, but couldn’t establish a lead as Boston’s offense kept scorching into the second half.

“I believe that last year, that postseason run, really helped our group come together even more. We have an understanding with each other, how we want to play and the things we want to do. I feel like it’s a carryover, but we wanted to continue to improve, and game-by-game this year, I think coach has done a good job of really making it clear for us the things he wants us to work on … we’re organized on offense, we’re getting to our spaces, we’re giving Jayson, Jaylen room to operate and do things, and I feel like that’s been one of the big differences … Jayson, Jaylen, Marcus, again, they’re doing a good job reading the defense and understanding when they need to kick it out, not taking that extra dribble.”

Horford got more involved as a primary facilitator in the offense over the past week, averaging 2.8 assists during Boston’s win streak as Mazzulla implements shades of the familiar for a Celtics team going through so much change. Brown also handled increase on-ball duties over the past two games with Malcolm Brogdon absent, and the Celtics’ second unit didn’t lapse at all as they dominated De’Andre Jordan and Denver’s bench.

Defensively, Horford felt more stable to start the season, playing drop as he did at times last year and mixing in some switching at times. He knew his role would change with Robert Williams III injured, but coming into camp in even better shape than last year, reluctantly resting during the Celtics’ first two back-to-backs and taking on some perimeter assignments while Marcus Smart and Grant Williams defended centers during the early schedule allowed Horford to ramp up into play once again reminiscent of his prime.

Smart put an onus on finding him in Memphis on Monday while Horford actively contested shots around the rim by the Grizzlies’ dynamic guards. Horford’s averaging 14.4 PPG on 63.6% shooting over his last five games and roared in frustration entering halftime on Friday after Bruce Brown converted a last-second put back. As the Celtics try to return to an NBA Finals berth that isn’t promised, Horford set a tone with his preparation.

“Al is just a professional,” Brown said. “He comes in night-in, night-out to the best of his ability, and that rubs off on everyone. Tonight, we knew that the way they cover us, that he would have some openings and we just tried to get him the ball, and he delivered. How old is Al? 36? Put up (21) points, etc, that’s amazing. Al is a professional, nothing less.”