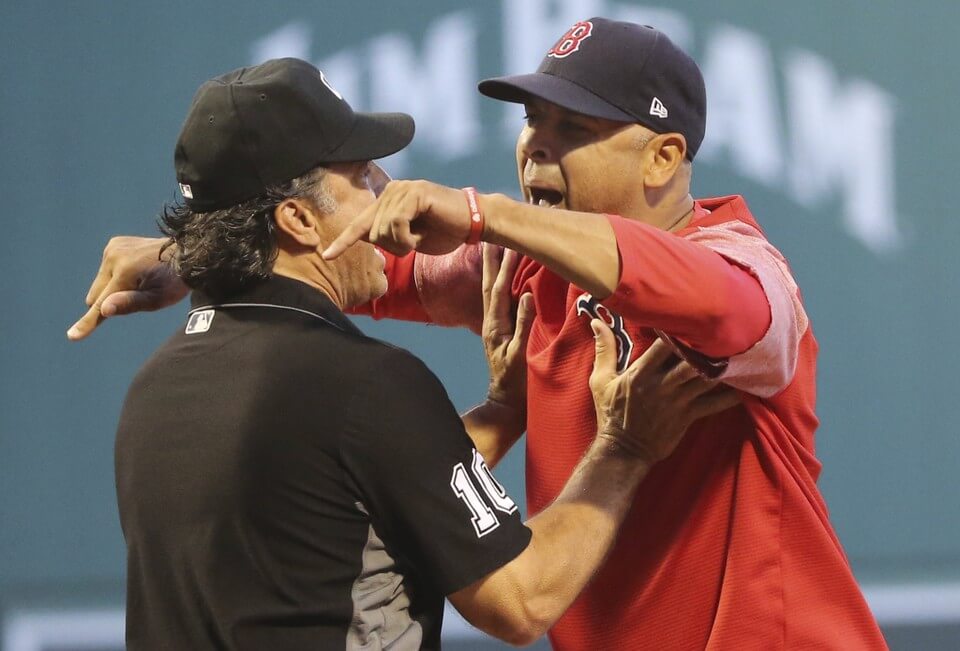 BOSTON — No wonder the Red Sox love their manager. Friday night proved another glaring example of why the Red Sox wanted Alex Cora running their ship in 2018 and why they’ve responded in unprecedented successful fashion so far.

For the second time this season, Cora had a big issue with the way the Yankees were playing the game against his guys.

Back in April, Tyler Austin (now with the Twins), went in spikes high against Brock Holt on April 11. Joe Kelly retaliated by drilling Austin later in the game and taking a six-game suspension for his actions.

On Friday night, Rick Porcello nailed leadoff hitter Brett Gardner with a fastball on the right triceps with an 0-2 pitch. It would be just one of two Yankee batters to reach all night in the first 1-hit shutout of the Yankees since Pedro Martinez’s masterpiece in Sept. 1999.

On a night when Porcello was brilliant, needing just 86 pitches in two hours, 15 minutes to shut down the Bombers, 4-1, improving baseball’s best record to 77-34 and giving the Red Sox a 7.5-game lead in the AL East, much of the talk afterward was about Luis Severino’s predictable and apparent retaliation against the best hitter in the American League to open the bottom of the first.

Severino fired a fastball up and in on his first pitch, avoiding Betts but spinning him to the ground. Home plate umpire Adam Hamari didn’t issue the warning to both teams but crew chief Phil Cuzzi did from first base. That sent Cora into a fit. He ran out to argue with Hamari, who tried in vain to wave him off but Cora would have none of it. He was furious.

WORTH FIGHTING FOR: Alex Cora gets tossed for first time as a manager. https://t.co/0zJLqu967p

“I mean, first pitch of the game, if I get a f-ing warning, it’s going to be surprising of course,” Severino said. “I wasn’t trying to hit nobody, and not even Mookie. Mookie’s a great guy. And if I’m going to hit somebody, I’m not going to go to the head. That’s not right.

“I don’t appreciate them throwing at Mookie Betts’ head,” Cora said. “If they felt 0-2, front-door sinker had intent, well, first pitch of the game, right at the head of the best player in baseball, there’s intent. It is what it is. We win the game. We move on.”

Later, to end his press conference, Cora took a shot at Severino when asked if he thinks Friday night’s head-hunting antics will end with the game or carry over.

“I don’t know, we scored four runs in less than six innings,” Cora said. “Is that a quality start?”

The Red Sox love their manager not because he’s a nice guy and plays cards with them. They play hard for him because he will fight for them at every pass and make public his displeasure when he feels his players have been wronged.

He did the same after a 5-0 lead in Baltimore was washed out and the whole series at Camden Yards seemed like a bunch of shenanigans from Buck Showalter directed at the team he despises more than any other.

Cora has a much more cordial relationship with Aaron Boone. The two respect each other and certainly the talent in the other dugout. Cora and Boone will almost certainly hash things out and move on. That’s the thing with Cora. He’ll get pissed off, let you know about it, let the world know about it and then get past it really quickly. That’s great management. Read, react and then move on.

In that game in April, it was Cora who pointed toward the Yankee third base coach Phil Nevin and waved him off when there was objection to Kelly’s retaliation to the ribs of Austin. If Cora thinks someone is personally attacking his players, rightly or wrongly, Cora will be ferocious in his defense, no matter the criticism from the outside.

“I can sleep well because I know my team is going to show up and play the game the right way,” Cora said.

His players, likewise, can sleep at night knowing their manager will back down from no one and will let everyone know he has their back. That partnership has produced the best record in baseball by far and shows no signs of slowing down.

It might have been Cora’s first career ejection but his players weren’t surprised.

“That’s nothing new,” said Porcello. “He’s been our emotional leader all year. He is our leader.”