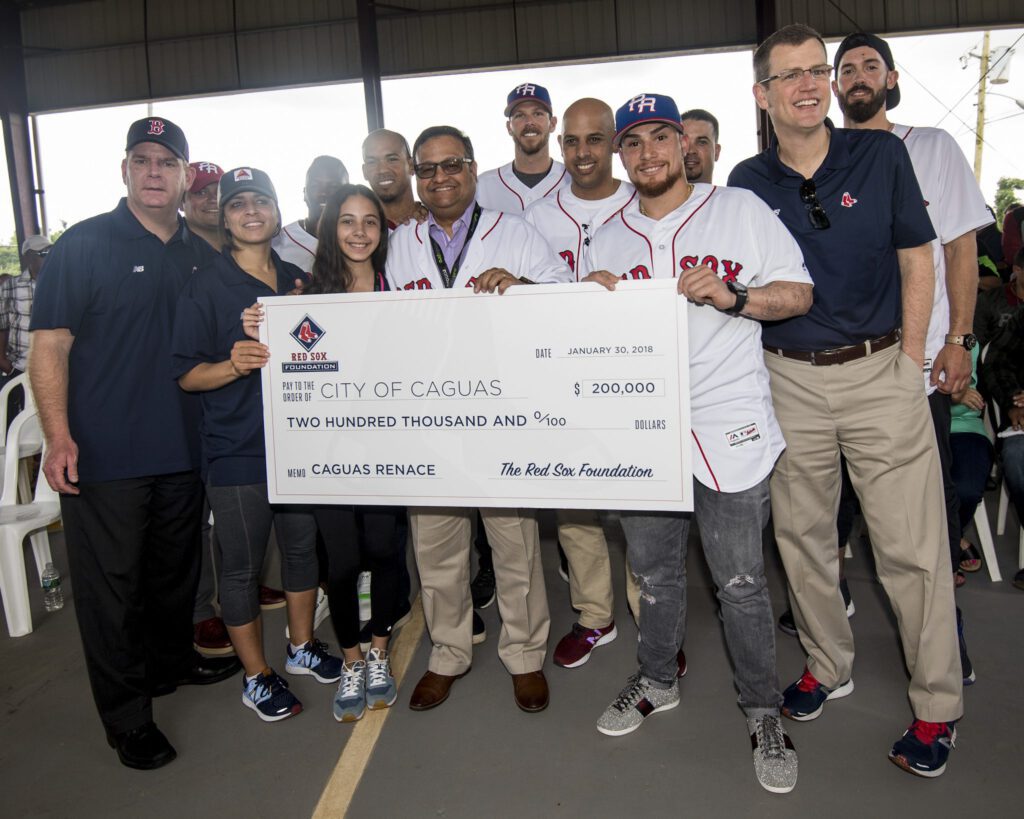 BOSTON – Before making a single decision in the dugout, Alex Cora has already made a huge impact as Red Sox manager.

Cora was the central figure of a massive relief effort Tuesday to his homeland of Puerto Rico. Cora led Red Sox players and executives to the country devastated by last year’s Hurricane Maria, with a big assist from JetBlue, and City of Boston Mayor Marty Walsh, bringing one of several JetBlue cargo freights to the island delivering nearly 10 tons of supplies to aid Hurricane Maria recovery efforts.

“Not to be selfish but I’ve been looking forward to this day even more than Opening Day,” Cora said of the relief trip to the Caribbean.

During the visit, a donation of $200,000 was presented to Caguas Mayor Miranda Marin to help restore electricity to the many residents of Caguas who remain without it. The donation includes Red Sox Foundation hurricane relief funds collected from fans this past season at Fenway Park, and contributions from Red Sox partners Seth Klarman, Henry McCance, and Herb Wagner. The donation was made to Caguas Renace, a municipal fund set up to help Caguas residents affected by the hurricane.

“While many areas have recovered from the initial devastation of the storm, there is still a great need on the island for relief,” said Cora. “I am thankful to the Red Sox who did not hesitate when I suggested a relief trip this offseason, and I am grateful to JetBlue for transporting all the supplies, and for the many organizations who made donations.

“To the fans who contributed this past season, and to Seth, Henry, and Herb, your generosity is above and beyond what I could have hoped for. Embracing this mission and helping the people I care so much about has made me feel welcome and supported by this city and organization in ways I could not have imagined.”

Upon arrival at Luis Muñoz Marín International Airport in San Juan, the plane was met by Red Sox catcher Christian Vazquez, Red Sox pitcher Chris Sale, Puerto Rico Governor Ricardo Rosselló, and Caguas Mayor William Miranda Marin. The group then made a trip to the city of Caguas, Cora’s hometown located 16 miles south of San Juan. In Caguas, food, water, and supplies were given out to nearly 300 families.

Nearly all residents in the immediate vicinity of the La Mesa Sports Complex in Caguas where supplies were distributed are still without power, and, according to the latest data from the U.S. Department of Energy, less than 64 percent of homes and businesses in Puerto Rico are receiving power.

In late September, Massachusetts Governor Charlie Baker and Mayor Walsh partnered on the creation of the Massachusetts United for Puerto Rico Fund, dedicated to the relief and reconstruction of Puerto Rico, and to support any Puerto Ricans arriving in Boston and the Commonwealth as a result of the destruction from Hurricane Maria.

“Boston continues to lead with its heart to step up for others during times when it’s needed most,” said Mayor Walsh. “I am incredibly humbled to be part of this service mission, and hope this trip serves as a symbol of our unwavering love for the people of Puerto Rico. I thank the Red Sox for leading this mission, and JetBlue for their support. Together we are sending a message to our strong Puerto Rican community here in Boston that we are here to help, for as long as they need.”

JetBlue, the official airline of the Boston Red Sox, provided the Red Sox-themed plane for the one-day relief trip and also facilitated the transportation of thousands of pounds of cargo to the island in the days leading up to the mission. The flight was part of the airline’s 100x35JetBlue initiative to support both short-term relief and long-term recovery efforts in Puerto Rico.

“As the largest airline in Puerto Rico, we are committed to supporting the return of tourism and rebuilding the prosperity of the Commonwealth,” said JetBlue Executive Vice President of Commercial and Planning Marty St. George. “As the island recovers, it was only natural to work with our partners at the Boston Red Sox to deliver not only much-needed supplies, but also joy to those most affected by the storms.”