All About Effort: Bruins Keep Their Heads While Hurricanes Lose A Grip In Game 1 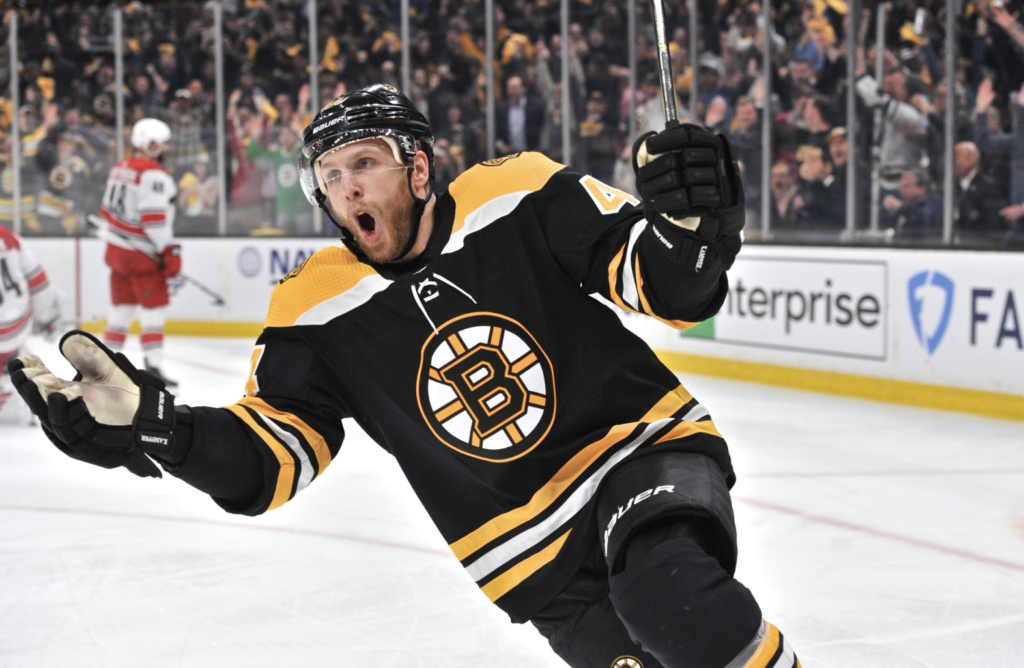 Two hockey mantras that every coaching staff preaches at this stage of the Stanley Cup playoffs.

And when you’re Bruins head coach Bruce Cassidy those principles are critical since his team is the more experienced and talented bunch with home ice advantage against the ‘jerky’ Carolina Hurricanes in the Eastern Conference finals.

Through two periods Thursday in Game 1, the effort wasn’t quite there and the discipline was a non-factor. The Hurricanes scored a power play goal to tie the game 1-1 in the first period and Greg McKegg raced in on Tuukka Rask midway through the second and found an opening for an even-strength goal and a 2-1 Carolina lead after 40 minutes.

Could the upstart “bunch of jerks” from Carolina come into Boston and steal Game 1 and valuable early momentum in the series?

Then Jordan Staal ran Charlie Wagner into the corner boards. Marcus Johansson put back a rebound 2 minutes, 26 seconds into the third to knot the game, 2-2. Dougie Hamilton got his elbow up on an oncoming Joakim Nordstrom for a 2-minute roughing penalty. Patrice Bergeron scored just 28 seconds after Johansson’s score for a 3-2 lead and the Bruins were ahead for good in a 5-2 Game 1 win.

Hamilton, the former first round pick of Boston in 2011, would take another penalty – for interference – nearly three minutes later for running at David Backes with the puck near Backes’ skates. Carolina could easily make the argument that both were questionable calls at the very least, including Hamilton himself.

“Well, I just watched both of them, so I didn’t agree with either, so not much else to say,” Hamilton said afterward. “The game’s over now, and nothing we can do about it now.”

Indeed, the Hurricanes can question those calls all they want but one thing was undeniable – the momentum they had gathered against the favored Bruins was all gone.

“Yeah, for sure, I think we were playing a, I guess, not bad game, but had the lead in the third and took some penalties and gave them the lead, so tough to come back from that,” Hamilton continued.

The Bruins didn’t score on that chance but the Hurricanes were giving valuable 5-on-5 time to tie the game. Coming in, the conventional wisdom is that the Hurricanes are just as efficient even strength but lacking badly on the power play and penalty kill. That showed up Thursday in Game 1.

The Bruins didn’t take it to the Hurricanes Thursday but Carolina gave Boston an opening with a lack of discipline and the Bruins took full advantage.

The biggest takeaway from Thursday’s Game 1 victory for Boston: Play harder and more consistent from the jump and they’ll be headed to the Cup finals.

After taking play to the Canes in the opening four minutes, the Bruins fell complacent. It was almost as if they proved to themselves they are indeed the better team and took the foot off the gas.

“I think if we would’ve stuck to our game, it might have been 5-1 for them,” Rask told me after. “We recognized in the second period, we weren’t good. It was only 2-1 (Carolina) and we realized we needed to go out there and raise our battle level a little bit, which we did and it paid off.”

“I think the third period, we just came out with a little bit of a better jump,” Nordstrom said. “Just played better overall, starting in the D-zone, and we were, I think, just harder to play against in the O-zone too. We were getting closer to the net and just finding those second chances.”

The Bruins got away with playing just about one period of sustained hockey Thursday. It took a while. But the Bruins found their legs against the Carolina Hurricanes.

“I think we did enough to win the game,” Jake DeBrusk told me. “I think Tuukka hit it on the head and we understood that. That was the message coming from the coaching staff. We had better (play) to bring and it’s obviously early in the series, things are a little rusty and you’re playing against a new opponent. In saying that, it was just a matter of execution and effort, and making sure you do whatever you can to help the team win, no matter what it is.”

And they can thank a former Bruin for pitching in during Game 1 of the Eastern Conference finals Thursday night at TD Garden.