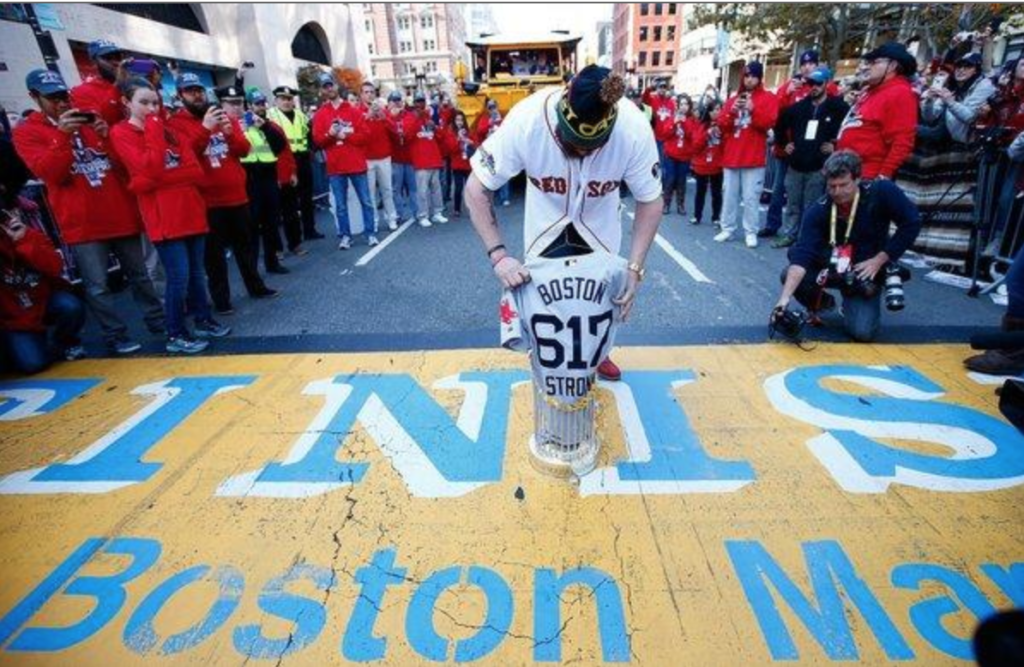 Both painful and inspirational, the events at the finish line of the 2013 Boston Marathon will always be connected to Boston and the Red Sox. The tragic, horrifying and heroic images united a city, started the “Boston Strong” movement and – behind the indomitable spirit of David Ortiz (above) – inspired a baseball team that rallied to win the World Series that October.

It is with this backdrop that the Red Sox will commemorate the five-year anniversary of the 2013 Marathon in a ceremony preceding the 7:10 p.m. game this Friday at Fenway Park.

The ceremony will include participation from Marathon survivors as well as the family members of Krystle Campbell, Martin Richard, Lingzi Lu, MIT Police Officer Sean Collier, and Boston Police Officer Dennis “DJ” Simmonds, all of whom perished that week as a result of the attack and the pursuit of the Tsarnaev brothers.

The tribute will recognize the resiliency of the Boston community and celebrate the good that came out of that tragic day. Friday also marks the start of a weekend-long series of volunteer and charitable efforts by the club as part of One Boston Day, with participation from current and former players. Marathon weekend at Fenway Park is presented by John Hancock.

This weekend, Boston remembers the pain of the moment five years ago and the strength and determination of its people that carried them through when one of their iconic celebrations was attacked.

On Sunday, the five-year anniversary of the tragedy, the entire City of Boston will acknowledge the Marathon bombing with a moment of silence at 2:49 p.m. The Red Sox will observe that moment during the 7th inning stretch of the 1:05 p.m. game.

As they did five years ago, the Red Sox will be leading the effort to remember the victims and resolve to never fear those who intend pointless harm and terror.

On Patriots Day, the Red Sox will host a traditional 11:05 a.m. game, presented by Coca-Cola, and will wear jerseys with “Boston” appearing on the front, a practice that began in during the Marathon tribute at Fenway Park on April 20, 2013.

As part of One Boston Day throughout the city and region, the Red Sox will make a number of donations and organize volunteer efforts that will take place Friday through Sunday. Proceeds from the Red Sox Foundation’s 50/50 raffle from those three games will be donated to 11 different Marathon-related charities, including the Heather Abbott Foundation; the Stepping Strong Center for Trauma Innovation; the Martin Richard Foundation; the Krystle Campbell Memorial Fund at the Boston Foundation; Officer Sean A. Collier Memorial Fund; the Lingzi Foundation; One World Strong; Arredondo Family Foundation; Achilles Freedom Team of Wounded Veterans; A Leg Forever; and Dennis “DJ” Simmonds Scholarship Fund at Lasell College.

The club also asks fans to join the effort by bringing toiletries to Fenway Park on Friday and Saturday that will be assembled and donated to The Dimock Center in Roxbury, and Heading Home, an organization that seeks to end homelessness in Greater Boston. Donated items can be dropped off at the Fan Services Booths at Gates D, B, and E. A list of items needed for the toiletry kits is attached.

On Friday, Brock Holt, his wife Lakyn, and Wally the Green Monster will bring pizza and ice cream to patients at the Jimmy Fund Clinic from 11:30 a.m. to 12:30 p.m., courtesy of Regina Pizzeria and Hood. From 11 a.m. to noon, Dustin Pedroia and Rick Porcello will visit patients at Spaulding Rehabilitation Hospital with the World Series trophies.

From noon to 1 p.m., Jackie Bradley Jr. and his wife Erin will join Red Sox President and CEO Sam Kennedy, Red Sox alum Jim Corsi, members of the front office, and Tessie to bring Red Sox gear and lunch, courtesy of Savenor’s, Aramark, and Frito-Lay, to Boston Public Schools officials at the Bolling Building in Roxbury.

On Saturday, April 14, Red Sox alum Lenny DiNardo, along with members of the front office and Tessie, will drop off Red Sox apparel at the New England Center and Home for Veterans from 11 a.m. to noon. The World Series trophies will also be available for photos with Veterans. On Sunday, members of the front office will participate in the Martin Richard Foundation’s day of service by assisting in neighborhood clean-up efforts in Peabody Square in Dorchester.

As always, and especially during Patriots Day weekend, the Red Sox encourage fans to take the T and Commuter Rail. In addition to the Kenmore and Fenway stops on the MBTA’s Green Line, the Yawkey Station on the Commuter Rail’s Framingham/Worcester line offers dozens of regularly scheduled stops each day.