Anatomy Of A Bengals Miracle: Game-Changing Play By Logan Wilson and Sam Hubbard Was Just Part of Story

Bengals win a classic playoff game thanks to guts and guile. 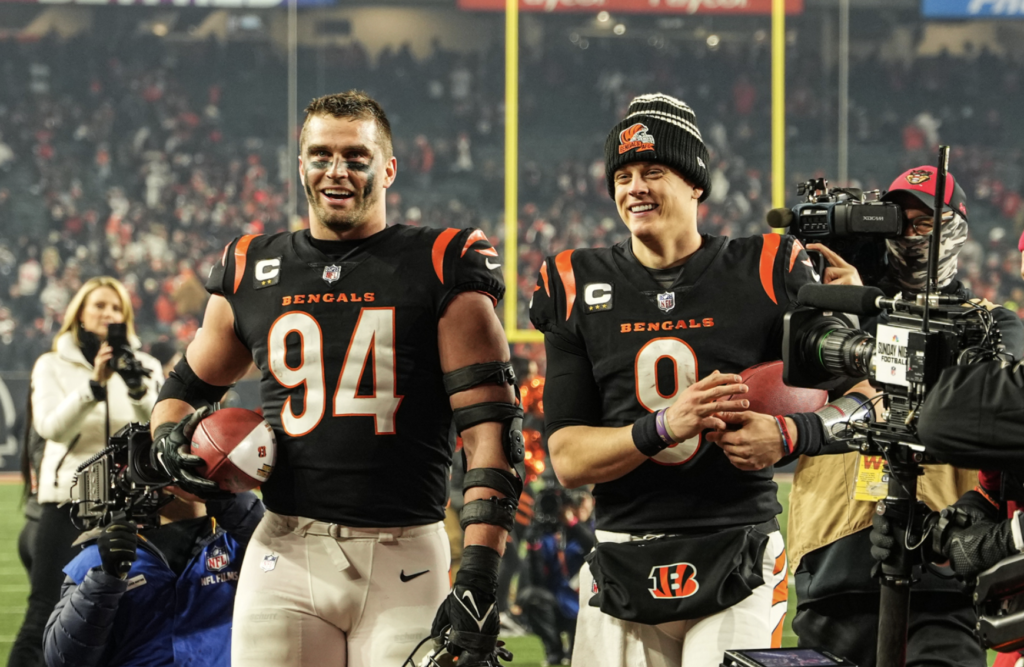 CINCINNATI – Whatever it takes.

Chuck Noll – the late legendary coach of the Pittsburgh Steelers dynasty of the 1970s – adopted that credo for his teams because he knew that winning football games isn’t easy.

What it took Sunday night was arguably the greatest single play in Bengals playoff history to allow the defending AFC champs to survive and advance, 24-17, over the Baltimore Ravens before 66,399 delirious fans.

Before Logan Wilson knocked the ball out of Tyler Huntley’s hands inches from the goal line in a 17-17 game, the Ravens had all the momentum in the world.

Huntley had just engineered a drive that featured a 25-yard scramble toss to tight end Josh Oliver following his own fumble of a snap. Then he ran 35 yards off the left side and appeared headed for six.

Then Jessie Bates came out of nowhere to push him out at the Bengals 2.

On first down, Huntley’s pass for fullback Patrick Ricard fell incomplete. On second down, Vonn Bell made a touchdown-saving play when he stood up Gus Edwards at the 1, setting the stage for the biggest forced fumbled in Bengals playoff history.

On third down, Huntley tried to go high instead of doing what Ravens coach John Harbaugh said was called for, “burrow” underneath the blockers. Ironic use of words there.

Wilson met him up high and knocked the ball right into the arms of Sam Hubbard. The Cincinnati kid raced 98 yards, with a key block on Mark Andrews provided by Markus Bailey, giving a jolt of life that extended the Bengals playoff season. Hubbard’s fumble return TD was the longest fourth-quarter go-ahead touchdown in NFL postseason history and was the longest fumble return TD in NFL postseason history.

“Credit to Logan Wilson, punching it out. Just being in the right place, right time,” Hubbard said. “Got a few blocks along the way, and I was just worried about getting tracked down. I’m glad I made it to the end zone.

“It was a long drive leading up to that play. I was pretty gassed, but I’m definitely proud of myself on being well conditioned… you can’t even dream that one up. It’s pretty special, but I was just glad to see my teammates faces because that was a bad one. It was a toughly fought game. A lot of adversity, very physical. To make the play and be the guy to come through is an amazing feeling. Not only for my teammates, but the fans as well.”

“That’s why you never give up on a drive, even when it’s down there inside the two-yard line,” coach Zac Taylor said. “It’s what our defense — the whole red zone, the last couple years, it’s been awesome from our defense and today is no different.”

Sunday night’s play is right there in Bengals lore with Stanford Jennings touchdown return in Super Bowl XXIII, Germaine Pratt’s game-saving interception in the wild-card round against the Raiders and the Jessie Bates-Vonn Bell collaborative interception that set up the game-winning field goal in the AFC title game in Kansas City.

“It’s not about me. It’s not about the hustle play at all. It’s just the tradition that we’ve created here in Cincinnati,” Bates told me. “That’s what we’re all about — doing our job until the play ends. We’ve got one of the best red zone defenses in the league, so anytime we can line up another snap, we’ll be in good shape. It’s just the tradition and the standard for our defense.

“It’s the chemistry we have on this defense, the love that we have for one another. We have no doubt in one another. If somebody gives up a play, we know we’ll line it up and have their back. It’s the tradition, it’s the motto that we have here in Cincinnati. It’s all love within all of us.”

Wilson read the play perfectly and knocked the ball free just in time.

“Based on the distance that there was away from the goal line, I knew they were in a sneak formation,” Wilson said. “There was going to be space and time before he was able to reach the ball across the goal line. I just made a play on the ball, (Germaine Pratt) helped make a play on the ball and bust it out, and Sam was able to run it down to the other end zone. It was unbelievable.”

Logan Wilson knew Bengals would have hands full and need to make one or two key plays vs. Ravens pic.twitter.com/CEolClUyzU

While Hubbard’s return was certainly crucial and put points on the board, that play doesn’t happen without Bates and Bell doing their thing in the plays leading up to it.

“For Logan to knock that ball out and Sam to finish it off 98 yards later, it really changed the momentum of the game because you’re looking at a 14-point swing right there, going down seven and then being up seven,” Taylor continued. “It was a challenge on offense, certainly. It’s one of the better defenses we face all year. We knew that going in. Our defense really carried us in the fourth quarter. We really needed that.”

Paycor Stadium was as loud Sunday night as it has been in its 23 years of existence.

“It was unbelievable,” Hubbard said. “I think our fans are some of the best fans in the NFL. The environment’s similar or better than college, Ohio State. It was special. I never thought I’d see that day here in Cincinnati, but it’s been a long road. I’m glad we’ve got that type of energy here.”

While the fourth quarter was where the game was won by Hubbard, Bates, Bell, Wilson, Cam Sample and the defense, the way the Bengals held on at the end of the first half was another huge reason they came out on top.

The Bengals had just lost their starting left tackle Jonah Williams to a horrible left knee injury on their final drive of the second quarter. As Williams was on the turf clutching his left knee, Hayden Hurst fumbled the ball, and the Ravens took over at the Bengals 39.

The feeling inside Paycor was that of a season starting to disintegrate.

The Bengals then came up with a red zone stop that netted the Ravens only a 29-yard Justin Tucker field goal and a 10-9 Baltimore lead at halftime.

The Ravens were getting the ball to start the second half and the Bengals offense was starting to sputter.

After a 15-yard run by J.K. Dobbins to open the quarter, the Bengals got off the field on third down when Wilson chased down Huntley from behind to force a punt.

Burrow put together one of the most important drives of the season when he directed a 12-play, 83-yard march in seven minutes. Burrow “burrowed” in from one yard and found Tee Higgins on a 2-point conversion for a 17-10 lead.

The crowd was re-energized and electric.

“I love our fans here,” Joe Burrow said. “I love being from Ohio, playing for this team, and representing this state the way I do. The fans do a great job of giving us energy and putting us in a good position to make it hard on opposing teams when they come in here.”

But the Ravens retaliated with a 41-yard touchdown pass from Huntley to Demarcus Robinson and it was suddenly 17-17.

The Bengals went three-and-out setting the stage for the most improbable and season-changing goal line stand.

Naturally, these are the Bengals and it wouldn’t be a playoff game without a heart-pounding, heart-stopping ending. The Ravens drove to the Bengals 17 in the final 90 seconds. With eight seconds left, and after both teams had called timeout to discuss a 4th-and-20, Tyler Huntley threw a Hail Mary to the end zone. The ball fell to the turf, just beyond the grasp of James Proche II and the clock ran out.

Tyler Boyd entered the locker room after the great escape and declared, “We ain’t done yet.”

There were so many moments Sunday night that felt like the season was in the balance and could be slipping away. And every time the Bengals managed to find an answer. They won’t have the crowd on their side next Sunday at Highmark Stadium in Buffalo against the Bills in the Divisional round. But that’s for later this week.

“Playoff wins are always hard, always very satisfactory when you get them,” Burrow said. “We’re going to enjoy this one, then move on to the next one when the time is right.”

The Bengals didn’t always look like the better team, but they found a way to survive and advance by whatever means necessary.