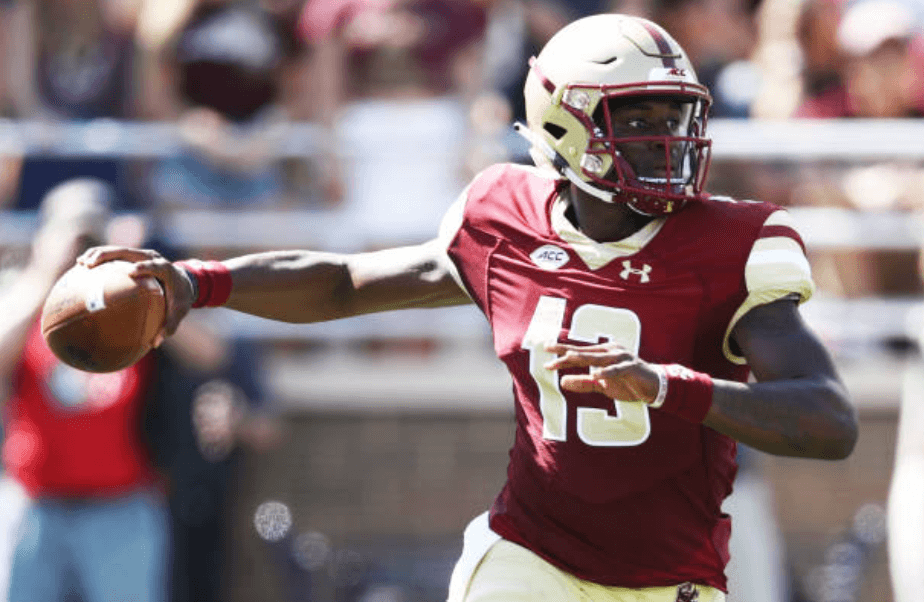 CHESTNUT HILL — If Boston College wants to show itself as a legit threat in the powerhouse ACC, they need to first exert their will against an overmatched opponent like the UMass Minutemen. And having a healthy Anthony Brown at quarterback will go a long way toward reaching that goal.

And Saturday, the Eagles and Brown needed just 30 minutes to get the job done. In his first game back since tearing his right ACL last November, Brown completed 15-of-21 passes for 279 yards and a career-best four touchdowns in the first half of a 55-21 romp over UMass before an announced crowd of 30,112 at Alumni Stadium. Boston College piled up 622 yards of offense on 87 offensive plays, a record for a Steve Addazio team at The Heights.

“Certainly today I thought we had an explosive performance on both sides of the ball,” Addazio said. “On offense we had 622 yards, 300 yards rushing and another 300 something throwing. I thought Anthony Brown came out and played an outstanding game after coming back from an injury, probably one of the best performances that’s been played around here in a long time. It was a hell of a game, and he did a great job.”

“It was very encouraging,” Brown added. “My teammates played wonderful today. They helped a lot – and they supported me all the way through the journey. All the credit goes to my teammates.”

Just to be back on the field for the 2018 opener was an accomplishment in Brown’s mind.

“I was really excited. I was like an eight year old playing football again,” Brown said. “There weren’t any jitters at all because we prepared for this day. I put a lot of time into this so my teammates could be ready and I could be ready. No jitters, no nervousness. There was none of that and we were ready to go today.”

For once, the main story on offense wasn’t super sophomore running back A.J. Dillon. While Dillon was a powerhouse in the first drive with 37 yards rushing on four carries and a 15-yard TD reception in the right flat, it was Brown who carried the tempo of the offense when the game was in question.

“I thought AJ – we didn’t play him in the second half – he had 98 tough yards in the first half, and I thought he did a heck of a job,” Addazio added. “Kobay White made some unbelievable receptions. I thought on defense, we came out, we played super hard, super intense. Came up with a couple of turnovers, one pick for a touchdown, a critical one down in the red zone in the second half. I thought our pass rush at times looked just phenomenal.”

With 6:29 left in the first quarter, this contest was actually tied, 7-7, when Marquis Young pounded it in from three yards for the Minutemen.

After that point, it was truly no contest.

Brown was the biggest and brightest story of the game for the Eagles. In his first game since tearing his right ACL last November against North Carolina State, Brown showed the type of pocket presence and strength that have had Eagles fans eagerly anticipating his return.

Five plays showed both his pocket poise and his raw ability. Facing a 2nd-and-15 at the BC 41, Brown found Kobay White for 25 yards and a first down to the UMass 34. On the next play, Brown looked off two receivers before waiting for White to break wide open down the right side. His 34-yard lob was on the money and the Eagles had the lead for good.

“Having Anthony as a quarterback is just so great,” White said. “I think he throws some of the best balls in college football. For all of the catches I had today, he put the ball perfectly to where I could get it so I didn’t really have any trouble with the defender when I was going to get the balls.”

On the next drive – the first of the second quarter – it was Brown to tight end Ray Marten for 29 yards to the UMass 14. That would set up the third touchdown of the day. Up 28-7 and having just converted a 3rd-and-6 for a first down at the UMass 33, Brown dropped back and waited until the last moment. With the defense cheating forward, Marten broke free and was wide open. Brown didn’t miss him and threw a perfect lob for his third TD of the first half.

The finishing touch for Brown was a perfectly-executed four-minute offense facing a 97-yard field with 3:46 left before the half. Brown was 4-for-6 for 78 yards, including a 27-yard on-the-money toss to White in the left corner of the end zone with a defender draped on him.

The first half ended when, for some reason, the Minutemen decided to pass over the middle instead of running out the clock. As Andrew Ford dropped back, the pass was tipped and Lukas Denis picked it off at the BC 41. Denis raced across the field and eventually into the end zone for a 48-7 halftime lead.

The second half was a mere formality and Brown was replaced by the pride of Andover High EJ Perry. Matt McDonald finished up the game at quarterback for BC.