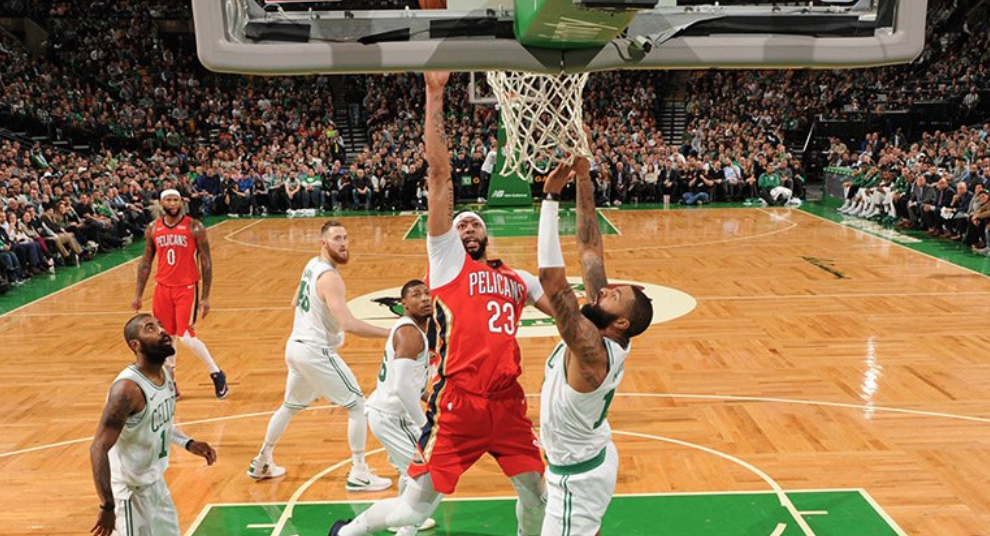 BOSTON — Anthony Davis was too much for even the Celtics to handle Tuesday night.

Coming off a 48-point effort at Madison Square Garden on Sunday night, the big man scored 45 points and hauled in 16 rebounds while another big, Demarcus Cousins added 19 points and 15 rebounds to lead the Pelicans over the Celtics 116-113 in overtime at TD Garden, snapping Boston’s seven-game winning streak.

Kyrie Irving had 27 points while Jaylen Brown and Marcus Smart each scored 16 for the Celtics, who fell to 34-11 on the season. New Orleans won their second straight overtime game on the road. The Celtics took a franchise-record 50 three-point shots, making 19.

Celtics fans got an up-close look at the player so many of them have dreamed about in Boston green. And those fans had good reason to left dreaming big.

Davis, the subject of reported continued interest from the Celtics, not only recorded his second straight 40-point game but his fourth straight game of at least 30 points, his 16th of the season. During the Pelicans morning shootaround, Davis deflected any talk of trade rumors.

Irving drove by Davis with 11.8 seconds remaining in regulation for a game-tying layup. Rajon Rondo inbounded to Demarcus Cousins, who missed a game-winning shot, sending the game to overtime. The Celtics appeared to be on their way to victory when Marcus Smart hit a pullup jumper with 2:11 left in OT to lead 113-110. But Cousins and Jrue Holiday took over, combining to score the final six points for the win.

Almost predictably, the Celtics came out sluggishly, committing three turnovers in the first four minutes, playing just their second game in 10 days. The Celtics started off ice cold from deep, missing 10 of their first 13 from 3-point range.

Meanwhile Davis was devastating the Celtics, scoring 17 of New Orleans’ 32 first quarter points as the Pelicans took a 32-25 lead after one.

After scoring 49 points the last time he faced the Pelicans, Kyrie Irving didn’t score until draining three free throws on a 3-point attempt with 4:08 left in the first quarter.

The Celtics started to climb back in the game thanks to the spectacular ball-handling of Jayson Tatum. His behind-the-back move on Jrue Holiday created space for him to know down a jumper that tied the game at 37-37. On the subsequent possession, Tatum blocked Holiday on a layup.

But the Pelicans came right back, thanks in large part to the bench play of Ian Clark, who had nine points of the bench. Rondo’s three put the Pelicans up 50-40 with 3:23 left in the first half. Marcus Morris was the only Celtic in double figures late in the first half. He followed a three with a baseline jumper to pump some much-needed juice into the Celtics offense. Still, Anthony Davis helped the Pelicans answer each run the Celtics made, leading New Orleans to a 58-48 halftime lead.

The Celtics found their 3-point groove in the third quarter, specifically Kyrie Irving. The point guard drained 4-of-5 from beyond the arc and finished the quarter with 16 of his team’s 32 points in the period. As a team, the Celtics were 8-for-13 from deep.

But the Pelicans responded again and built their lead back to 10, 90-80. But the Celtics finally turned on the defense. They went on a 18-5 spurt to take the lead.

With just over five minutes left in the game, Irving drained a three that broke a tie and gave the Celtics a 98-95 lead. Daniel Theis would drill a straightaway three as the shot clock expired to increase the lead to five, 101-96. But the Pelicans would not go away. Holiday’s three with 1:27 left tied the game, 101-101.