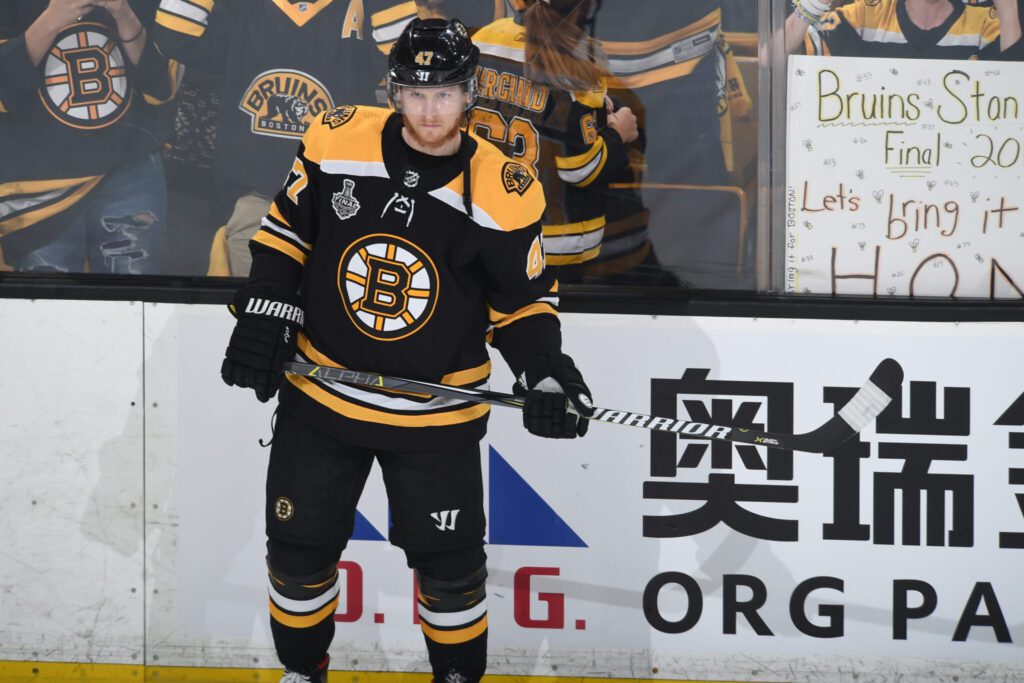 BOSTON, MA - JUNE 12: Torey Krug #47 of the Boston Bruins warms up before the game against the St. Louis Blues in Game Seven of the Stanley Cup Final during the 2019 NHL Stanley Cup Playoffs at the TD Garden on June 12, 2019 in Boston, Massachusetts. (Photo by Steve Babineau/NHLI via Getty Images)
Share
Facebook Twitter Email

Hockey is back. The Bruins are (almost) fully back. The excitement of playoff hockey, though different from most years, is back.

So too are the questions regarding Torey Krug’s future with the Bruins. They are also very back.

Krug is set to become an unrestricted free agent after this 2019-20 season is complete. Negotiations didn’t seem to be very active during the pause and now with camp starting back up, his future in Boston is still very uncertain.

“I don’t really know what’s going to happen,” Krug said to reporters via Zoom Monday. “I’m just trying to take it day by day and worry about the playoffs right now. I’ll probably have to prepare for free agency and we’ll see what happens there.”

The NHL salary cap staying at $81.5 million for at least the next few years does the Bruins no favors. They will have roughly $18 million to re-sign Krug and Zdeno Chara, as well as restricted free agents Anders Bjork, Jake DeBrusk and Matt Grzelcyk. It’s highly unlikely the Bruins bring back UFA-to-be Joakim Nordstrom.

Krug is by far Boston’s biggest decision of the offseason. He’s expected to land his next average annual value somewhere in the ballpark of $7 million to $9 million. His value as a dynamic, offensive defenseman is well-documented. Based on what he’s done in his full seven years of NHL service, he will deserve every penny of his next contract.

The question lies in whether or not the Bruins can afford it.

“I don’t treat negotiations a lot like other guys do and I don’t really believe in playing the games or this or that or waiting things out,” Krug said. “Once the puck drops and we start playing hockey games, I’m just going to focus on that. Anything leading up to that point we’ll see if anything can work out but once we drop the puck, I’m going to focus on that and we’ll have to reevaluate things afterwards. But I’ve always been comfortable with it. Nothing changes the way I approach each individual game and each individual shift, so I’ve never done anything out of the ordinary to worry about that.”

What has changed is the priorities in his life. In June of 2019, Krug and his wife, Melanie, had their first child — a daughter named Saylor. Her future, as well as the future of the Krug family, will certainly be wrapped into No. 47’s decision on what sweater he decides to pick in mid-October.

“Right now family is the number one thing and my priorities have changed quite a bit. Having to be a husband and be a father, it’s quite a different change in where your priorities lie,” Krug said. “You have to think about schools, you have to think about quality of life, living in certain climates — these are all some things that you take into consideration and we’ll see but I think at the end of the day, competing and being part of a core leadership group has all been important to me and try to build something and be apart of something special so you always want to do that.

“There’s a lot of things that go into it. But right now, I’m just focused on this group right here and now and hopefully helping us win a championship and I’ll have to prepare for whatever’s to come after that.”

All of those elements sit on Krug’s list of where his next destination will be. But first must come the unfinished business of the 2019-20 season.

His future still hangs in the balance.