As Terry Francona Comes To Town, Alex Cora Will Be Very Careful ‘Chasing Wins’ Down The Stretch 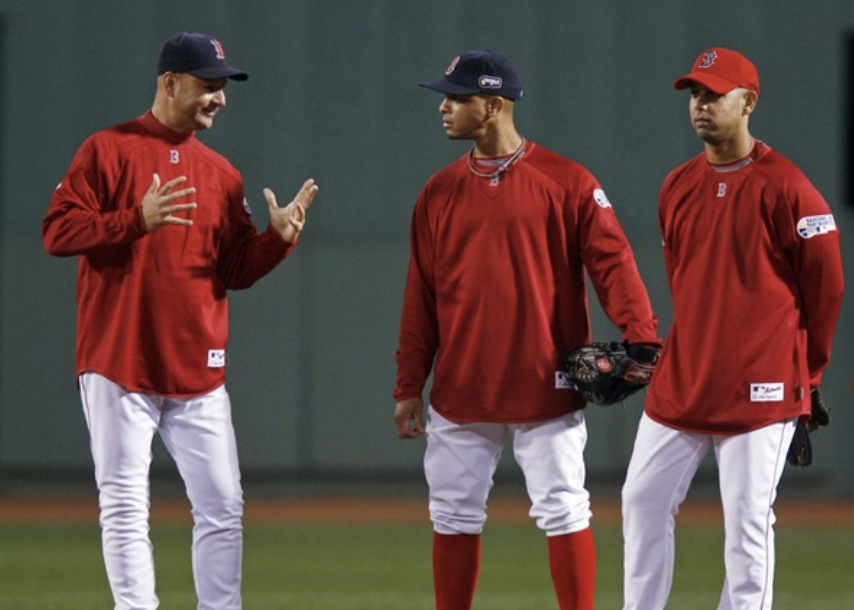 BOSTON — Alex Cora knows he’s in a great spot. He also knows that setting a new record for wins in a major league season is not why he was hired.

This Red Sox team is on pace to win 115 games and while that would look great in baseball reference years from now, if it’s followed by “Lost in ALCS” as was the case with the 2001 Mariners (116 wins), the win total will mean absolutely nothing.

The comparison Cora would like to eventually seen made to his 2018 team is the one made to the 1998 Yankees, considered by some the greatest all-around team of all time.

That Yankee team was an unreal 92-32 through 124 games. They finished with 114 wins and swept the Padres in the World Series. They faced one speed bump when they trailed the Indians, 2-1, after three games of the ALCS. But they recovered to win their final seven games and their first of three straight World Series titles in a run of four titles in five seasons.

“We’ve been chasing wins,” Cora said before Sunday’s game. And chasing history. Sunday’s 2-0 loss was just their third in their last 16 games and only the fifth time this season they were shutout.

Still, if the Red Sox finish 18-19, they will still set a record for franchise wins with 106. But Cora said that’s hardly been on his mind at this point.

“Nah man. Look, I know where we’re at and I pay attention to the league and everything,” Cora said before Sunday’s game. “We play today and then we’ve got Cleveland. They’re one of the best teams in the league and we have to be ready for them.”

What’s most important, naturally, to Cora is getting this team playoff-ready for the likes of the Astros, A’s, Yankees and a team that’s not mentioned enough in the conversation – the Indians. Cora was on an Astros coaching staff that beat the Dodgers in Game 7 of the World Series last year. That Dodgers team was 89-35 through 124 games, one better than the Red Sox heading into Sunday.

Thanks to a near-perfect balance between the starters and the bullpen, Cora has been able to dictate game situations pretty much all season long – not the other way around. Even Sunday, when the Red Sox were trailing 1-0 for most of the game, Hector Valezquez gave the Red Sox almost exactly what Cora hoped before the game, four innings of one-run ball in a spot start (Cora was hoping for five innings). Then Brandon Workman came in for two scoreless and Joe Kelly tossed a scoreless frame.

“It’s very important to have guys going deep into the game,” Cora told me Sunday. “We go deep into games and then we can maneuver our bullpen. Sometimes, we have that feeling that we’re running them into the ground. We pay the price because we’ve been on this run of winning and winning and winning. We use the guys. In the beginning (of the season), it was (Matt) Barnes, Joe and then Craig (Kimbrel). Now some other pieces with Heath (Hembree) in some traffic and now Ryan (Brasier). We’re in a good spot but we’re in a good spot because of the guys up front. They’ve been amazing.”

So, too, has been the ride the Red Sox have given Cora in his first year as Red Sox skipper. Enter Terry Francona. Two of the last three Red Sox managers have won a World Series in their first season with the team, starting of course with epic 2004 run by Francona. (We won’t mention the one that didn’t in 2012). John Farrell captured it all in 2013.

Before Cora even gets to a potential Series, he’s well on course to make history. The Red Sox record for wins is 105 in 1946. But it’s Francona that charted the course for this generation and Cora, as a player for him in 2006 and ’07 learned a great deal.

“He trusted me,” Cora said. “And he was very honest and genuine. I still remember in ‘07, we had these meetings in spring training, they would map out how it was going to play during the season. It was Theo, Tito and myself, and he goes, ‘The first two months you’re going to play a lot, until this kid gets right.”

That kid, of course, was ’07 AL Rookie of the Year and ’08 AL MVP Dustin Pedroia. Francona protected Pedroia with Cora to start the ’07 season.

“He’s going to try to do a lot of things out of character,” Cora said of Francona’s words to him. “He’s going to swing hard and struggle a bit, but when he gets it, he gets it. And we can see our careers. Pedey got it and I became the utility guy.

“Tito was awesome. The way he handled the media is something, not only here but throughout the years. He has this ability of saying a lot and not saying too much. And being sarcastic, and making fun of himself, I think that’s one of his best qualities. He’s in a good place. You can tell.”

The Indians, who haven’t won it all since 1948, come to town for four games starting Monday. This might be the preview that could tell us what to expect from these Red Sox in October.

BetOnline.ag – Red Sox Travel to Tampa for ALDS Against the Rays

Can The Boston Red Sox Beat The Tampa Bay Rays?