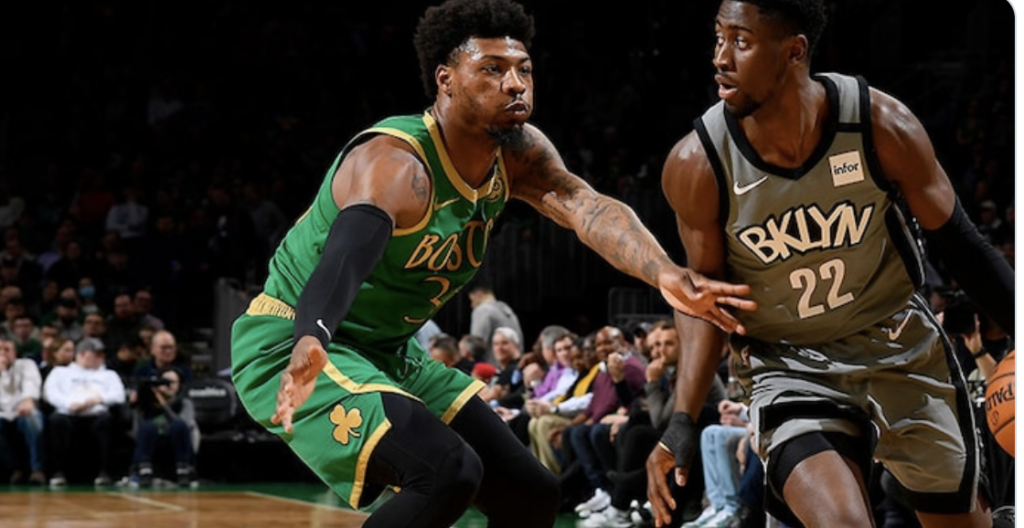 BOSTON – The Celtics are suddenly facing a crisis of confidence.

When Jaylen Brown drained a three with 6:28 left in the third quarter, the Celtics had a 71-50 lead and the crowd at TD Garden got so comfortable and disinterested in the game they started chanting “Where is Kyrie?” from the balcony sections.

Apparently, the Celtics were just as disinterested.

That’s about the only way to explain allowing a 26-33 Nets team to score 51 points in the fourth quarter, capped off by a stunningly bad choice by Marcus Smart to foul Caris LeVert as he was jumping in the air to draw three free throws with 0.2 seconds left. Whether or not you think Smart fouled LeVert, the Celtics should never have been in that situation to begin with.

Naturally, LeVert drained all three free throws to force overtime and the result was a mere formality at that point. There was no way the Celtics were coming back from that. And they didn’t, getting outscored 11-2 in the extra period in a horrifically bad 129-120 overtime loss to Brooklyn at TD Garden.

“I mean, I think if you play to momentum, and you’re relying upon momentum, then you – you will lose,” Brad Stevens said. “Or you will not maximize your team, certainly. If you’re just a team of runs, or when things are going really well and everybody’s patting you on the back you feel good about yourself, you know, you’re good, and when things aren’t, you let go of the rope. Like, teams of runs lose.

“Teams that can stay in the moment and play the next possession the right way and not be influenced by the score, not be influenced by the situation of the game, the circumstances of the game, have a different level of toughness and a special toughness. We’ve exhibited that most of the year; I think that this is an anomaly, but nonetheless, this was a very humbling one, because again, that was ridiculous.”

Ridiculous is one word. Inexcusable is another.

Instead of chanting about the former Celtics guard who just so happened to have shoulder surgery earlier in the day, the Celtics fans would’ve been well advised to chant “Where is your defense?”

“Yeah, we didn’t have any defensive intensity,” Stevens said. “You know, I should’ve subbed a couple of guys out that normally play; and I just let them – kept them in, and we had great intensity for most of the game and we just let our foot off the gas. But, we got four stops in the fourth quarter. They scored 51 points. You know – the game’s 48 minutes. We made a lot of plays late, that were just not winning plays, and pretty simple, basic parts of our – our defensive system, and, but they deserved to win. And I guess if you’re in this game long enough you’ll see it at some point, and so we saw it tonight.”

Stevens opened the press conference in an appropriately sarcastic tone:

“These are the ones you look forward to,” he said.

Yes, the Celtics were without their Eastern Conference player of the month for February in Jayson Tatum, out sick. They lost Gordon Hayward late in the first half to a right knee contusion. They had Kemba Walker returning from a knee issue of his own, limited to 23 minutes. Jaylen Brown tweaked his right hamstring late. Marcus Smart fouled out in the overtime and then took his anger out on official John Goble going off the court after the game. Smart did not speak to reporters after.

“I have no idea who’s going to Cleveland. I think most of the coaches are going, couple players. I just want eight guys, nine guys – whoever’s going to play hard, let’s go. Like, that was ridiculous. No, Brooklyn deserves credit. And I hate – I hate to say it that way because they really deserve credit. Those guys were in the game for Brooklyn, like, and (Caris) LeVert’s special, obviously, but those other guys too, they were really engaged and they deserve – they deserve credit for that.”

“You’ve got to treat it as a learning experience,” said Gordon Hayward, who is likely going to join Kemba Walker among those Celtics staying back from the one-night excursion to Cleveland for Wednesday’s game. “You know when you take your foot off the gas pedal anybody can come back at you. Just got to be better on both ends of the court, but we did a really good job building the lead, but they stormed back and you know, tough plays at the end, of course.”

In back-to-back home games, the Celtics couldn’t close out a team that was clearly there for the taking. They weren’t tough defensively in the fourth quarter of either game and they allowed one player to attack them relentlessly, with Russell Westbrook scoring 41 Saturday and LeVert going for 51 Tuesday.

“You know you’re around this league a long enough time, sometimes 20 even 30 points isn’t enough and like I said, as soon as you take your foot off the gas pedal guys get hot, short possessions, there’s always time to come back so we’ve just got to be better. Cut the losses.”

“I don’t know, I wouldn’t say that, but Brad (Stevens) would definitely say we did,” added Kemba Walker. “Those guys they ramped it up. Obviously, LeVert was hot, he’s making anything. Unbelievable performance by him.”

This was supposed to be a game where we celebrated a big night for the bench when they needed it. Boston scored 40 points with the reserves in the game, ten times what they did on Saturday against Houston. But on this night, whether it was Carsen Edwards, Javonte Green, Brad Wanamaker, Grant Williams or Semi Ojeleye, the Celtics didn’t have enough in the tank when it mattered most.