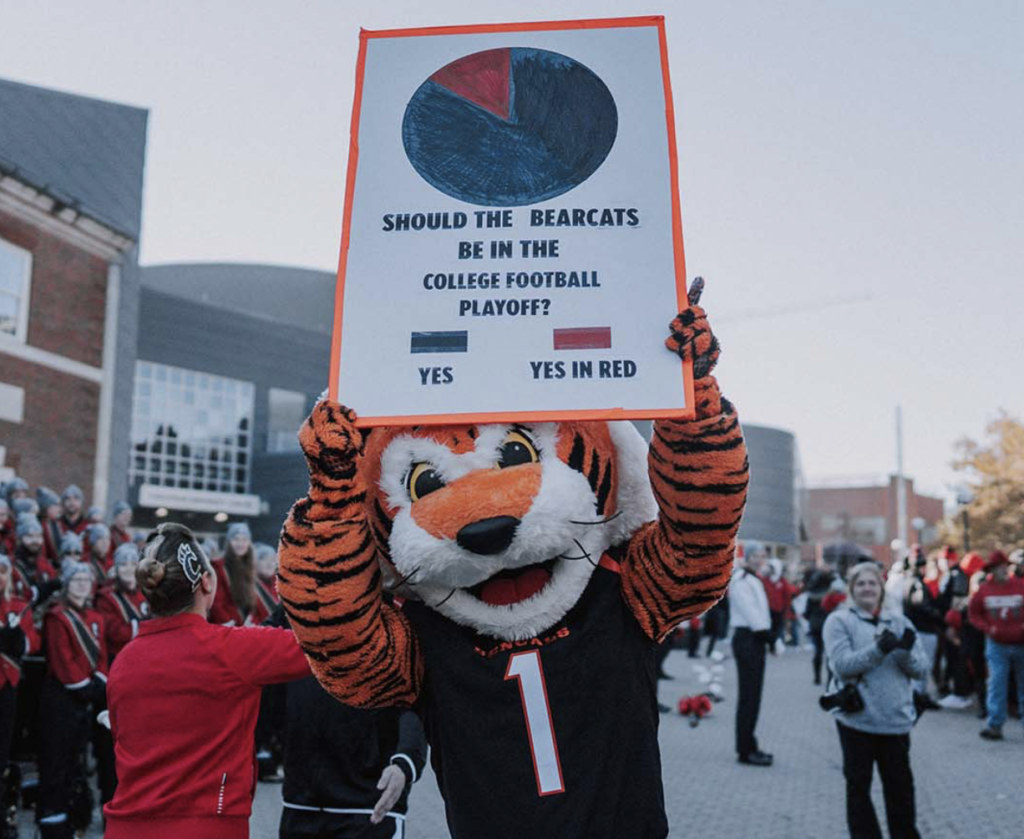 CINCINNATI – This continues to be the most compelling autumn in Cincinnati sports memory.

Never have we enjoyed both the Bearcats and Bengals being relevant national storylines in football into December. But that’s what we have thanks to a Bearcats team reaching and perhaps even surpassing its expectations coming into a 2021 season that featured senior leadership on both sides of the ball.

The Bearcats did what they needed to in a 35-13 win at East Carolina Friday. They’re 12-0 for the second time in program history. But their dreams of a college football playoff berth come down to one more test, the American Athletic Conference title game next Saturday at Nippert against 11-1 Houston. They find a way to win that on home turf, they’re 13-0 and the committee won’t be keeping them out. Period.

Did that just happen?! https://t.co/ZEvhSrRsTC

The Bearcats, with a win over Houston, will be heading to the College Football Playoff and Ohio State will be on the outside, playing a New Year’s Day bowl. And if we dare dream, if the Bearcats win their next two games, the National Championship is up I-74 in Indianapolis on Jan. 10.

Think about the possibility of the following, UC plays Alabama on New Year’s Eve in the national semifinal. Two days later, Patrick Mahomes and the Chiefs play the Bengals at Paul Brown Stadium. The Bearcats beat Bama and play Georgia or Michigan on Jan. 10, a day after the Bengals finish the regular season in Cleveland. Such a scenario would transcend sublime to surreal.

A tradition unlike any other…

The Bengals have had their disappointments, losing in Chicago and New Jersey to far inferior opponents. But a 6-4 record following last week’s win in Las Vegas has them playing relevant football heading into Sunday’s huge rematch with the Steelers at Paul Brown Stadium.

Zac Taylor has had his share of statement wins this season, the win over the Vikings in the opener when the game was won, lost and then salvaged in overtime, the road win at Pittsburgh, the comeback from 14-0 down to Jacksonville, the domination of the Ravens at Baltimore and the 32-13 win over the Raiders in Vegas.

But Sunday at home is not going to be easy. It’s in many ways their biggest psychological test. Can they handle a Pittsburgh team out for blood after the Tyler Boyd “quitter” label in September? The Steelers have T.J. Watt, Alex Highsmith and Diontae Johnson, three key players that missed the Week 3 game at Heinz.

“To be the team that we want to be consistently, you have to be strong in the division,” Taylor said. “Whether it is Pittsburgh, Cleveland, Baltimore, we want our team to feel confidence every time we walk on the field with those guys that we belong and we are going to win the game. This division is just so strong.”

The AFC North is going to make men out gentlemen. This division is exactly what Taylor thinks his Bengals need to reach that intensity level that will prepare them for a deep run in the playoffs against teams like the Patriots and Titans.

“I have said it over and over again,” Taylor continued. “I wouldn’t want to be in any other division because I just see the teams that come out of this in the playoffs, and they are talked as Super Bowl contenders every single year. If you can prove you can win in this division, you have to feel pretty good if you can get out of it and get to the playoffs that you got a shot. Because playing these teams six times, no other team in the league wants to sign up for that. But that’s what we got. And once you got it, I love it. I really do love it.

“It’s physical. There are great skill players. There’s such physical guys on both sides of the fronts. Well-coached. I mean, the coaches in this division are tremendous. Again, when you come into the division people say, ah, that sucks, you are in the AFC North. But three years into it and I’m sure the other guys would say the same thing, I wouldn’t trade it for anything because you got to earn your way through the division. Obviously, you are not in it to go 11-6 and lose in the first round of the playoffs. You are in it to win the Super Bowl. This division gets you as tested as anything to feel like you could win the division then go on to do much bigger things.”

To Taylor, these Bengals are in the process of proving they belong in the December discussion and Sunday would go a long, long way in legitimizing that belief.

“I think the first year was difficult,” Taylor said of his rookie year in 2019. “Last year better feeling, just weren’t quite there yet. Then you go into this year, now we know the outcome could be anything any time we walk on the field with these guys but there’s certainly confidence among our coaching staff and our players that we belong. We can trot out there and win every game.”

Steelers Week in The Jungle 😤

Looking for our third straight win against Pittsburgh. pic.twitter.com/LiP8HOorkL

What’s so fun about watching the Bengals and Bearcats simultaneously ascend to great heights is to compare their DNA. Bearcats coach Luke Fickell has gone from four wins to back-to-back unbeaten regular seasons. That’s 20 straight wins. Throw in the AAC title win over Tulsa last year and the win over Boston College in Jan. 2020, you’re looking at 22-1 in their last 23 games. That’s better than any program in football.

The transformation in Zac Taylor has been just as dramatic when you look at the way the Bengals play. Joe Burrow and Ja’Marr Chase have a lot to do with it but the reworked defense under Lou Anarumo is even more telling. The roster is deeper and more aggressive. The closeout on Derek Carr last week. The finishing of Lamar Jackson and Ben Roethlisberger have the earmarks of a legitimate playoff contender.

The Bearcats and Bengals have built a certain DNA.

“It’s how you draft – which they have always done out here,” Taylor said. “That’s nothing new. I think just from my own experience now when you acquire players, I’ve said this a lot, playoff experience. National championship experience. They have been in big moments, they have been in physical games when you play at the Alabamas and the Ohio States and all the teams that come at that level, it’s relative up here.

“You want guys that know how to handle that moment and aren’t just content winning one big game a year then missing the playoffs. We don’t want guys that are content like that. We want guys that are built to come in here and enjoy the process every single day and winning matters most to them. We got a room full of guys that that is the case.”

Xavier men’s basketball started out 4-0 and was ranked 25th before their 12-point loss this week to Iowa State. They had a nice bounce back 59-58 win over Virginia Tech in the NIT Tip-off class in Brooklyn on Friday.

UC hoops under first-year coach Wes Miller started 5-0, beating No. 14 Illinois by 20 before hitting a major speed bump in losses to No. 13 Arkansas and home Saturday to Monmouth, 61-59, in a heartbreaker. The Bearcats head to Oxford to take on the Miami RedHawks Wednesday at Millett Hall.

Dayton lost at home to UMass-Lowell, Lipscomb and Austin Peay before stunning the basketball world Friday with a 74-73 win over No. 4 Kansas in Orlando.

So much going on at once. It’s almost as if it’s too much desert after a great Thanksgiving feast. By Sunday at 1 p.m., we’ll all be hungry for more.