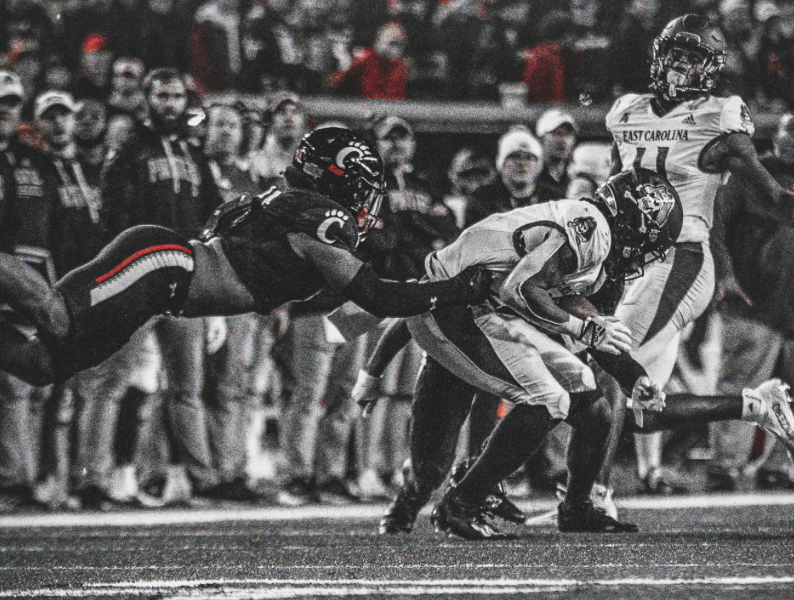 CINCINNATI — Nipp at Night turned into a thriller in the chiller.

Holton Ahlers converted a fourth-and-10 from his own 41 as he was being tackled to the ground by Bearcats defensive lineman Eric Phillips. But on fourth-and-9 from the Cincinnati 41, nickel back Taj Ward knocked away a pass for Jaylen Johnson to help the Bearcats survive East Carolina, 27-25, Friday night before 38,199 at a brisk Nippert Stadium.

The Bearcats received three explosive plays for touchdowns but it was Ryan Coe who converted a pair of field goals, including the go-ahead kick midway through the fourth that allowed the Bearcats to extend the nation’s second longest home winning streak to 32 games.

The win improves the Bearcats to 8-2 overall and 5-1 in the American Athletic Conference while the Pirates fall to 6-4 and 3-3. It’s a huge win for Cincinnati, which will now watch as Tulane hosts Central Florida Saturday. Tulane is 5-0 in the AAC while UCF is 4-1, with a win over UC.

The stars came out for “Nipp at Night” as Desmond Ridder and Sauce Gardner – stars of the 2021 history-making Bearcats team – returned to Nippert and were given a rousing ovation, as they were shown on the sideline on the video board after the first quarter.

A heroes welcome back to Nippert for @iamSauceGardner and @desmondridder between first and second quarters. pic.twitter.com/zhbISu1e3G

On top of that, UC basketball coach Wes Miller, fresh from UC’s win over Cleveland State on Thursday, hosted his top 2023 basketball target. Isaiah Collier and Wheeler High School are scrimmaging against Sycamore on Saturday, as the top point guard in the nation returns to Cincinnati.

At 6-foot-4, 205 pounds, Collier is widely viewed as the best pure passer in the country. He is the top player on 247Sports’ rankings. Collier is considering UC among a list of schools that includes UCLA, Michigan, and USC. He’s expected to make his decision by the national commitment deadline of date Nov. 16.

It was a rough start for Ben Bryant and the offense. He was sacked on the first series on third-and-5, forcing a Bearcats punt.

The next time the Bearcats got the ball was at their own 8 and on second down, Bryant didn’t see the rush up the middle and was sacked by Jeremy Lewis and Elijah Morris in the end zone. The safety gave ECU an early 2-0 lead.

On the drive after the free kick, the Pirates drove to the UC 31 when the defense stiffened. Andrew Conrad, the freshman kicker that kicked the game-winner at BYU, converted from 47 yards to extend the lead to 5-0.

But on the ensuing kickoff, Bearcats speedster Jadon Thompson single-handedly shifted the momentum in the game when he stepped in front of speedster Tre Tucker at the goal line and raced 100 yards for a game-changing touchdown return down the right sideline. Thompson ran up the middle and then evaded the middle pressure of coverage and bounced to the right where it was wide open.

While he didn’t get a chance to show off his speed when Thompson stepped in front of him on the TD return, Tucker more than made up for it on UC’s next drive. He caught a bubble screen pass from Ben Bryant and outraced the Pirates secondary for a 57-yard touchdown sprint that made it 14-5. Tucker used a great inside seal block from tight end Josh Whyle to break free.

It appeared the Bearcats were about to blow the game wide open on another huge play when Tyler Scott caught a slant pass at the Cincinnati 40 and sprinted past the secondary for a 76-yard touchdown that put UC up, 21-5.

The Pirates then turned reversed the speed tables on the Bearcats when CJ Johnson got UC nickel corner Sammy Anderson turned around. Lefty quarterback Holton Ahlers tossed a perfect back shoulder pass to Cincinnati 45 and Johnson outraced the UC secondary to the end zone.

East Carolina continued their late first half momentum from the Johnson touchdown on the first drive of the second half. The Pirates marched down to the Cincinnati 9 where they faced fourth-and-inches. But as the teams were leaving the field for an ECU timeout, UC backup defensive end Justin Wodtly pushed a Pirate to the ground. He was flagged for unsportsmanlike conduct and ECU had first and goal at the 4.

On the next snap, Keaton Mitchell raced around the left end untouched and into the end zone and the Pirates were within five, 24-19.

Chris Scott collided with Corey Kiner and the Bearcats lost a yard on third-and-1 and the Bearcats went three-and-out. But Mason Fletcher’s 47-yard punt led to a minus-2 yard return and ECU began their second drive at their 13.

After UC forced a punt, ECU got the ball back at their 32 and began a drive that would put them on top. On a first-and-10 at the Cincinnati 30, Holton Ahlers threw for Mitchell down the right sideline. Safety Bryon Threats came across and drilled Mitchell, knocking the ball loose. But Threats was flagged for targeting, ejected and Mitchell was tended to for several minutes on the ground. The ECU back did not return to the game.

On the next play Ahlers hit Georgia transfer Jaylen Johnson with the go-ahead 15-yard touchdown over the middle.

UC appeared to be on the verge of scoring a go-ahead touchdown when Bryant drove the Bearcats down to the ECU 4. But Evan Prater replaced Bryant on second and third downs. He ran for just one yard on second down and had a pass batted down on third down before settling for a 21-yard Ryan Coe field goal that put UC ahead, 27-25, with 9:42 left.