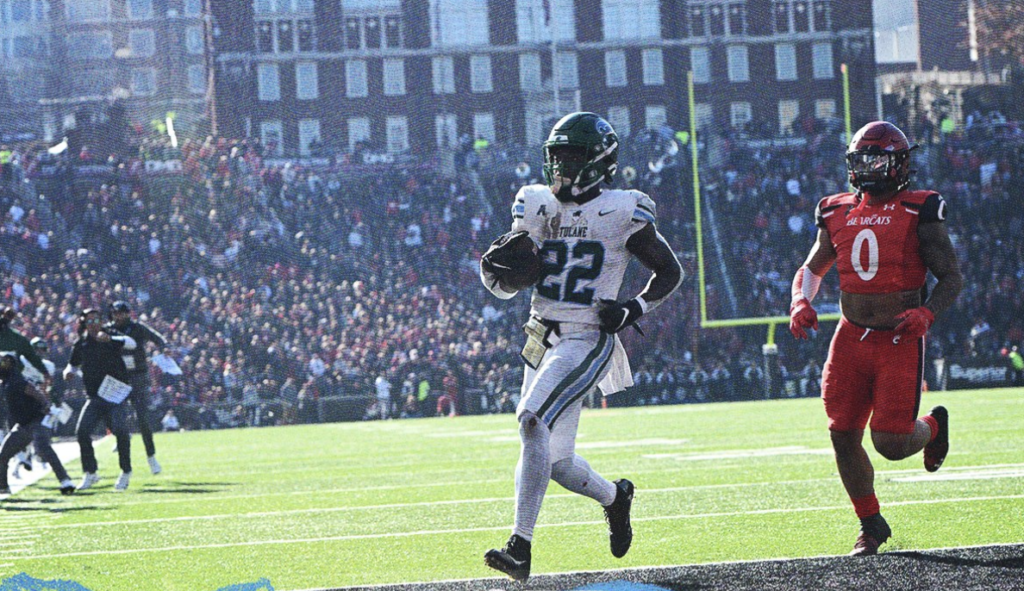 CINCINNATI — The streak is over. And so too, likely, are the hopes of a New Year’s Six bowl game for the Cincinnati Bearcats.

Tyjae Spears scored a pair of touchdowns and rushed for 181 yards on 35 carries to lead the No. 21 Tulane Green Wave to a 27-24 win over the No. 25 Cincinnati Bearcats at Nippert Stadium.

Ryan Montgomery had a pair of touchdowns to go with 95 yards rushing on 17 carries in the loss.

The loss ends Cincinnati’s home win streak at 32 games (second longest in the nation behind Clemson) and will knock them out of the American Athletic Championship game next week unless South Florida upsets Central Florida. Those two schools meet in Tampa Saturday night. A South Florida win will put UC in the AAC Championship Game next Saturday in New Orleans.

A beauty from Michael Pratt to Duece Watts for the Green Wave to regain the lead🤩#AmericanFB x @GreenWaveFB pic.twitter.com/CYSNL2oLv7

Evan Prater, filling in for the injured Ben Bryant, hit a cutting Tyler Scott over the middle on fourth down with 56 seconds left but the ball bounced off Scott’s hands and incomplete to end the game and send Tulane to the AAC Championship next week.

The two teams battled to a 10-10 tie before a late second quarter field goal gave Tulane a 13-10 halftime lead.

The Green Wave took advantage of a controversial defensive pass interference call on fourth-and-goal at the Cincinnati 6. Michael Pratt’s pass was intended for Will Wallace was incomplete but pass interference was flagged on safety Bryon Threats. On the next play, Tyjae Spears ran across the formation on a jet run and beat the Bearcats defense to the left and ran untouched into the end zone for a 20-10 lead with 6:59 left in the third.

Evan Prater gave it all he had. An emotional Prater fights off tears that he fell just short for UC seniors. pic.twitter.com/4Kk7r4cxEh

Desperately needing an answer, Prater answered by engineering a 14-play, 75-yard drive that was capped off by a stutter step eight-yard run to the left by Ryan Montgomery to cut the lead to 20-17 with 42 seconds left in the third. Montgomery had the play of the drive, with a second-effort run on fourth-and-1 from the Tulane 27. After a Prater pass to Tyler Scott to the Tulane 8, Montgomery ran it in for the score.

The Bearcats defense then answered as Tulane appeared ready to march right down the field. Facing a third-and-2 at the Cincinnati 39, the defense stopped Spears on third down for no gain and Pratt just short on fourth down.

Then came the catch of the day and the year so far. With the Bearcats needing nine yards on third down at midfield, Prater scrambled for several seconds before spotting Will Pauling, who caught the pass on the near sideline in front of the UC bench. Initially called out of bounds, UC coach Luke Fickell called timeout before the punt and the play was reviewed, showing a clear toe-tap in bounds with the left foot.

The Bearcats marched down to the 20 where they faced yet another fourth down. Prater’s QB sneak gained the yard needed to keep the drive alive. Two plays later it was Montgomery up the middle for 15 yards and UC’s first lead of the day, 24-20.

Ryan Montgomery does it again!

But Tulane needed just four plays to go 75 yards, capped by Michael Pratt passes of 33 yards to Shae Wyatt and a 30-yard fade to Deuce Watts for the go-ahead touchdown, putting Tulane up

UC’s defense held once more at their own 40 and forced a punt. With 1:36 remaining, the Bearcats got the ball at their 20.

What the Las Vegas loss means for the Patriots future