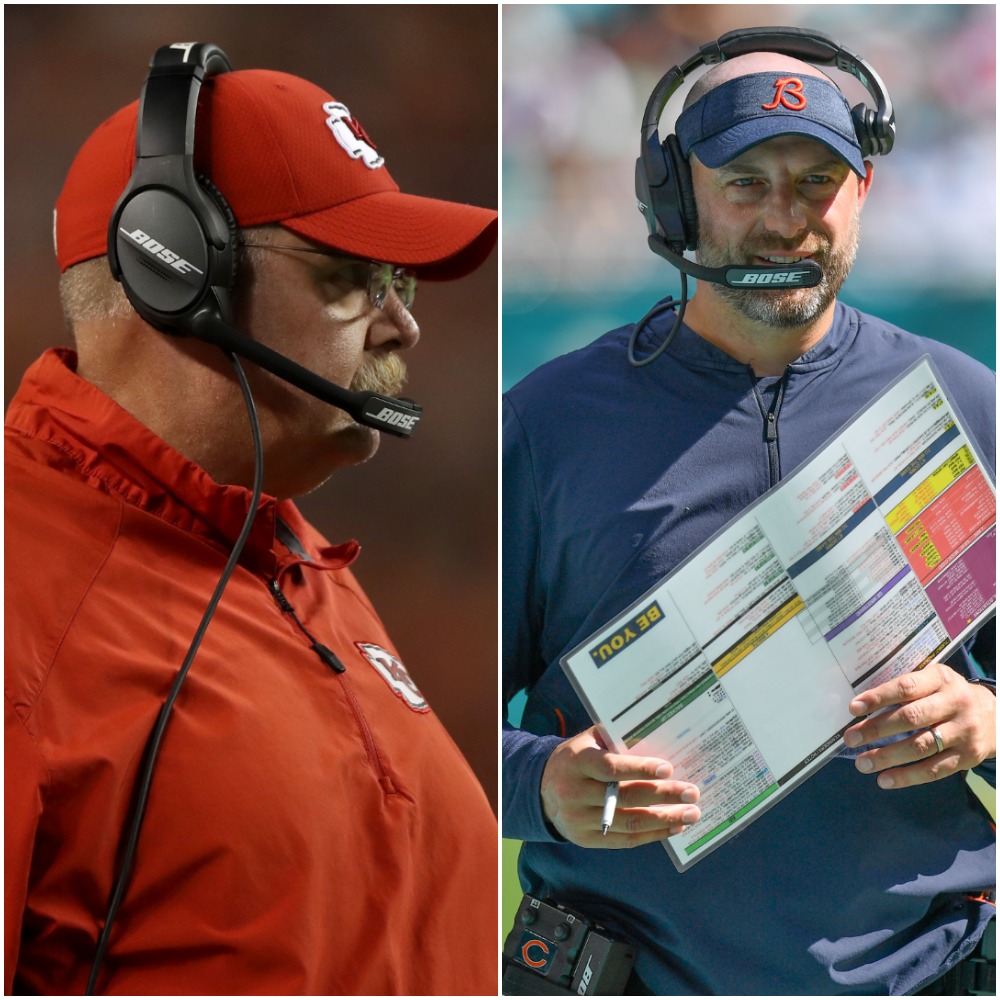 FOXBORO — As the Patriots turn the page to the Chicago Bears and new head coach Matt Nagy’s offense, they’ll be staring at an offense that looks very similar to their last opponent.

“Yeah, definitely. There sure are,” Patriots head coach Bill Belichick said of the similarities between the Bears and Chiefs offenses. “It’s different, but there’s certainly some carryover. Of course one of the big differences is the personnel. Yeah, there’s certainly a lot of carryover from Kansas City’s basic stuff.”

Bears head coach Matt Nagy, of course, is an Andy Reid disciple, spending his entire NFL coaching career until now with Reid dating back to 2008 with the Philadelphia Eagles.

The two coaches love each other so much that Reid brought Nagy with him to Kansas City, and named him his offensive coordinator for the 2017 season.

The most obvious similarities between the Bears and Chiefs offenses are the integration of college-style schemes into a traditional west coast system.

Both Chicago and Kansas City are among the league leaders in the frequency in which they call run-pass options (RPO), with the Chiefs pacing the league and the Bears not too far behind in third.

But it’s more than just that, both teams have also used many of the same vertical route concepts to open up the passing offenses downfield, and that’s where both teams’ young quarterback thrive.

This season, Trubisky throws the deep ball with more frequency than any other quarterback in the NFL, even Chiefs quarterback Patrick Mahomes.

Through five games, 18.6 percent of Trubisky’s passes traveled 20 or more yards in the air, and his 15 completions on those attempts is the second-most in the NFL even though the Bears have already had their bye week.

Trubisky has his limitations; he misses far too many open receivers and his accuracy is hit or miss, but he’s a natural deep ball thrower, and Matt Nagy makes it easier on him by creating separation for receivers downfield.

And the Bears also feature two speedsters, wide receiver Taylor Gabriel and running back Tarik Cohen, the latter of which the Bears inked to a free-agent deal in March.

Below, we’ll go through some of the Bears’ core passing concepts and highlight some of the ways they resemble Matt Nagy’s mentor Andy Reid, and even some things that the Patriots do as well.

Let’s start with a concept that gave the Patriots fits on Sunday night against the Chiefs, the inside switch as its commonly known, which is a cover-3 beater.

Now it’s important to remember that each team has its different spin on things, and use their terminology, but the basic concepts stem from the same place.

Both the Bears and Chiefs like to overload one side of the formation in three by one sets, or as you’ll see with the Kansas City example, stacked alignments.

The Chiefs ran a similar concept against the Patriots last week on Tyreek Hill’s 75-yard touchdown, but run Hill out of a stacked alignment while holding Jason McCourty on the far boundary with an intermediate route by tight end Travis Kelce.

These aren’t identical route designs, but Gabriel and Hill run similar routes, and it all originates from the same concept.

The Chiefs, Bears, and even the Patriots have embraced route combinations that began as apart of the air-raid passing system.

College offenses feature the air-raid the most at schools such as Washington State under Mike Leach and head coach Lincoln Riley at Oklahoma.

One of Josh McDaniels’ favorite calls, and Matt Nagy’s, is the scissors concept.

The idea is that the receivers will cross over each other downfield, which can throw off the zone assignments in the secondary.

Here, the Bears have the two outside receivers run posts and tight end Trey Burton runs a corner route. The Bucs are in cover-3, and the two defensive backs on the backend go with the post receivers leaving Burton wide open on the corner route.

Although he isn’t as explosive as Chiefs tight end Travis Kelce, Burton’s skill set is very similar, and he’s a perfect fit in the Reid/Nagy passing game essentially serving as a big wide receiver.

Another way the Bears utilize Burton is on the switch-boot concept, which Chicago also runs off of RPO actions at times.

This time, the Bears appear to be running straight play-action, but you see the offense sell the outside zone run while sneaking Burton out of the backside of the formation on the flat route. The play is designed to get the defense moving in one direction while the receivers and quarterback “switch” or “swap” with the bootleg and flat route action. Typically, that leaves plenty of room for the receiver, in this case, Burton, to run after the catch. This scheme also allows Trubisky to use his athleticism to make throws outside the pocket which is where he’s most comfortable.

The Chiefs ran almost an identical play to Kelce in Week 6.

When the Bears selected running back Tarik Cohen in the fourth round of the 2017 NFL Draft, they got a major weapon for top pick Mitchell Trubisky.

With Nagy at the helm, he has unleashed Cohen who’s on pace to double his yardage output from his rookie season.

Although he’s listed as a running back, the Bears use the explosive Cohen in the slot as well.

On this play, Chicago runs a post/wheel concept, which is a staple of the Patriots offense. Bears wideout Allen Robinson takes the outside corner on the post, and Cohen does a great job of disguising the wheel route. Once he breaks up the sideline, there’s nobody there, and it’s an easy completion for Trubisky.

The Bears also use Cohen out of the backfield as a receiver, but his ability to run routes at a high level allows Nagy to move him around the formation.

Bears quarterback Mitchell Trubisky is having a rough start to the 2018 season.

The second overall pick in the 2017 NFL Draft has struggled in all but one game, and that came against the arguably the NFL’s worst defense in the Tampa Bay Buccaneers.

Trubisky has a strong arm, and his deep ball accuracy is above-average, but he struggles to see the field and has sporadic ball placement in the short and intermediate areas of the field due to a lack of experience both in college and in the NFL (only made 13 career starts at the FBS level).

Despite Trubisky’s struggles as a passer, the Bears offense still ranks eighth in points per game (27.8) because of a productive running game (aided by Trubisky’s ability as a scrambler), a dangerous group of receivers, and Nagy’s scheming.

The Patriots come off of a week where they allowed four completions of 20 or more air yards, three of which went for touchdowns, to another high-volume deep passing attack in the Kansas City Chiefs.

“We have to learn from last week and do a better job of making plays,” said cornerback Stephon Gilmore. “The coaches put as in a position to make plays, and we have to go out there and do it.”

The Patriots ought to be familiar with the schemes of the Chicago offense, but they’ll need to do a better job defending them at Soldier Field on Sunday.