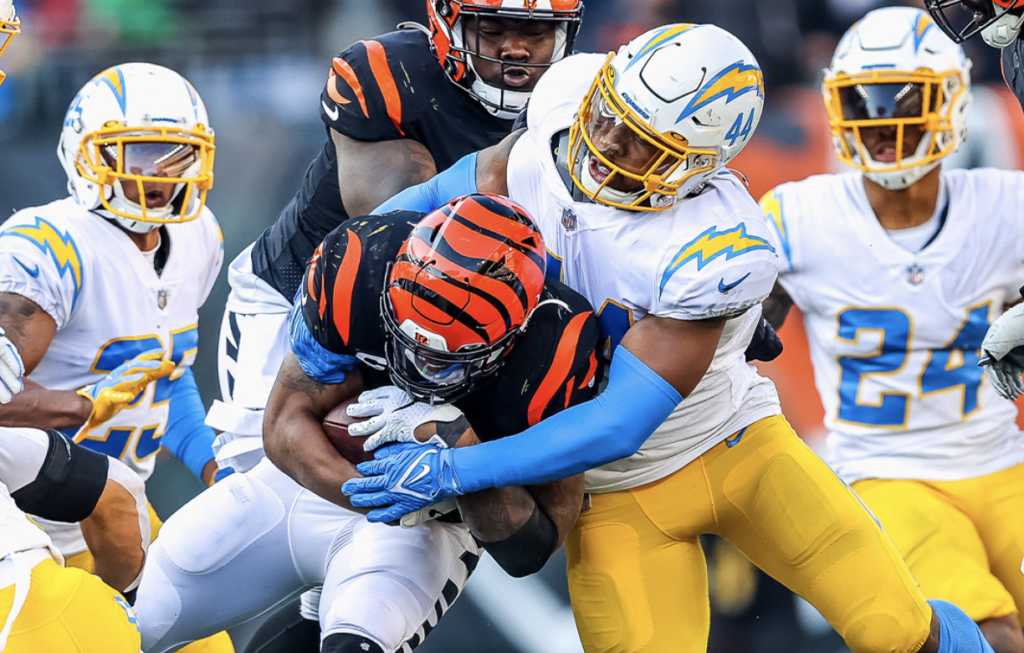 On top of all of that, the Bengals were starting rookie Trey Hill at center for Trey Hopkins and Isaiah Prince at right tackle for Riley Reiff.

With the injuries to Logan Wilson, Markus Bailey and Chidobe Awuzie, and Joe Burrow’s right pinkie, all of it appeared to be falling on the Bengals like an avalanche as they fell behind, 24-0.

The Bengals showed signs of posting the biggest comeback in franchise history but a fourth-quarter fumble by Joe Mixon led to a 61-yard scoop-and-score turned the tide back in favor of the visitors as the Chargers beat the Bengals, 41-22, before 51,414 at Paul Brown Stadium.

Burrow finished the day 24-of-40 and 300 yards, one touchdown and two interceptions, including one late in the end zone that sealed their fate. Tee Higgins caught nine passes on 14 targets for 138 yards and a touchdown. His counterpart in the 2020 draft, Justin Herbert, finished 26-of-35 for 317 yards, three touchdowns and an interception.

The Bengals fell to 7-5 and conclude their three-game homestand next Sunday against San Francisco while the Chargers improved to 7-5 while scoring 17 points off four Bengals turnovers.

The start of the game horrific for the Bengals.

The Bengals defense had two chances to get off the field without points but failed. Herbert found Keenan Allen for 10 yards on third-and-9 at the Chargers 46. Herbert then connected with Mike Williams for 41 yards to the Cincinnati 4. The Bengals defense appeared ready to hold the Chargers to a field goal but Herbert and the offense went for it on fourth down, and Herbert found Keenan Allen over the middle for the touchdown.

Burrow was strip-sacked on Cincinnati’s first possession, sacked and recovered by Uchenna Nwosu. The Chargers were held to a 43-yard field goal from Dustin Hopkins and it was 9-0.

Joe Burrow had Ja’Marr Chase for a easy touchdown on a go-route down the right sideline. But Chase bobbled the ball and it fell into the hands of corner Michael Davis, who was beaten on the play.

Herbert immediately went up top and found Mike Williams for 47 yards to the Bengals 26. Four plays later, Herbert found Allen for a second time in the end zone and a 16-0 Chargers lead.

Things got worse in the second quarter when the Bengals lost their best linebacker, Logan Wilson, to a right shoulder injury while covering a Bengals punt. They had already lost the services of Markus Bailey, a special teams force earlier in the game, also to a shoulder injury.

The Chargers made it 24-0 when Herbert threw a 44-yard cross-field bomb to Jalen Guyton, who beat Jessie Bates in the end zone in a battle for the ball.

The Bengals then took over and finally mounted a drive that ended with Burrow finding Tee Higgins on a 29-yard seam route for the first score. But indicative of how the first half went, the Bengals botched the two-point conversion by calling a timeout and then were called for delay of game, causing Joe Mixon and Joe Burrow to yell in anger and frustration at the sideline while coming off the field. Evan McPherson missed the extra point wide right and the Bengals still trailed, 24-6.

Burrow continued the comeback with a nine-yard TD run with just over two minutes left in the first half and it was 24-13. The Bengals had a chance to get more points before half but the Bengals mismanaged the clock approaching midfield and the injured Burrow left the field in anger again.

Burrow directed a drive to start the second half that ended with an McPherson 48-yard field goal and pulled the Bengals within one possession at 24-16.

After Germaine Pratt forced a fumble and Mike Hilton recovered, the Bengals took over at the Chargers 32. That drive ended with Joe Mixon’s seven-yard TD run. The Bengals went for two and failed when Mixon couldn’t get in from one yard out.

9️⃣ straight games with a TD for @Joe_MainMixon