Behind Enemy Lines: Babcock wants lots of Gardiner, Tavares on the Bruins 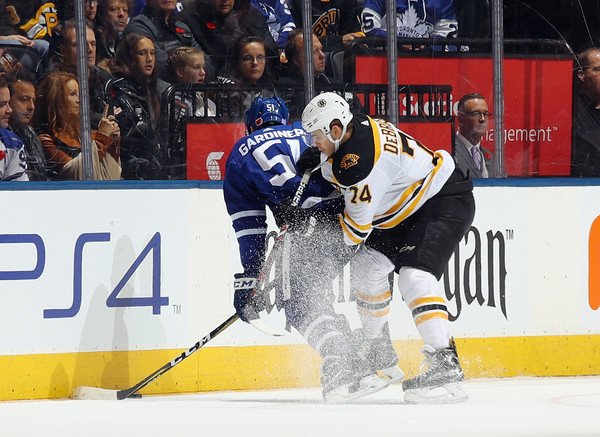 As the countdown continues to Thursday night, the Toronto Maple Leafs are preparing themselves for a better series against the Boston Bruins than they had last year.

Judging off head coach Mike Babcock’s comments from Tuesday, things may end up not being that different.

The Bruins have Tuukka Rask; the Maple Leafs have Jake Gardiner. Both are as polarizing as a player can get in their respective cities.

On Tuesday, Babcock made it clear that despite the hate, Gardiner would be used a lot against the Bruins.

“I think Jake Gardiner is a really good player,” said Babcock after an optional Leafs practice.

“I think he is someone that people have decided isn’t a good player, and so they pick on him.

“I can tell you right now, we can’t find another one. I guess the way I look at it is real simple for me. I think he is a really good player and I’m going to play him a lot.”

The Gardiner-hate up in Toronto reached a peak last year when he was minus-5 in Game 7 against the Bruins, the worst coming on this Jake DeBrusk goal.

On Tuesday afternoon, Leafs center John Tavares joined the Hockey Central crew on Sportsnet to chat about the upcoming series with the Bruins.

“I think Boston has a complete hockey team,” said Tavares. “They really can put the puck in the net. They can be dangerous offensively and they can be a patient team that tries to frustrate you — they don’t give you a lot offensively to yourself.”

Tavares almost joined the Bruins in free agency last summer and talked about it on Monday. Part of what he liked about the B’s was the veteran core.

“They obviously have a very established core of veterans who’ve had a lot of success there and kind of really set the standard for them in the way they play,” said Tavares to Hockey Central. “They’ve been through a lot in terms of their playoff experience and experience as a group.”