Joe Burrow calls win a 'complete game' and the secret 'sauce' for rest of season. 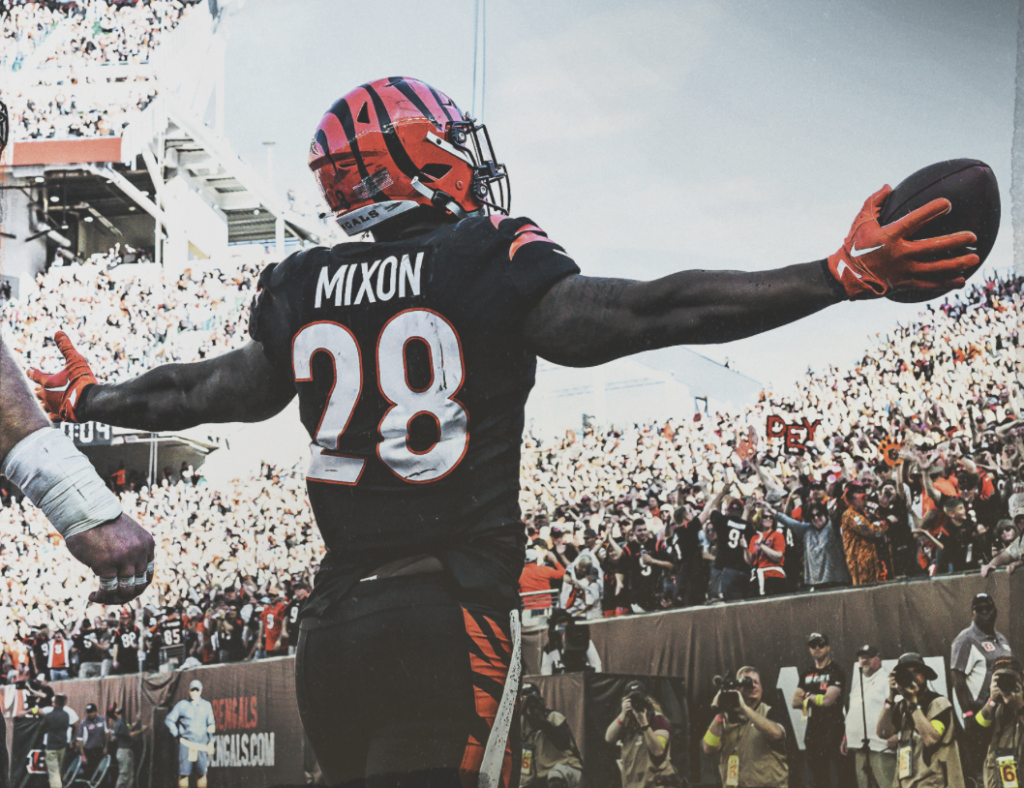 CINCINNATI — The Bengals beat the living daylight out of a woebegone team Sunday. But it’s not the 35-0 halftime score or the 42-21 final over the Carolina Panthers that mattered. It was how they did it.

But what made Sunday so significant was the attitude the Bengals displayed in putting away a team that was 2-6 coming in. They physically pounded them into submission.

Joe Mixon ran for 153 yards on 22 carries and four rushing touchdowns, and finished with a franchise-record five scores when you throw in the receiving touchdown he had from Joe Burrow at the end of the first half. Add onto that four receptions for 58 yards, including a huge 35-yarder on the first drive, and Mixon accounted for 211 of his club’s 469 yards of total offense.

Mixon was the beacon on this glorious day at Paycor Stadium. He took the message from offensive coordinator Brian Callahan Saturday night and spoke truth to the power of a run game. Yes, that run game that fans and media alike had been clamoring for over the first eight weeks, that run game showed up in full glory Sunday to the tune of 241 yards on 39 carries.

“You guys set the tone heading into the second half of the season of what Bengals football looks like,” Zac Taylor told the team after presenting the third and three game balls to Mixon, who joined Pete Johnson, Rudi Johnson, James Brooks and Corey Dillon as Bengals backs with 5,000 yards rushing.

The offensive line, tight ends and wide receivers were fully engaged in the run game and being physical with a team that was allowing 126.6 yards per game on the ground. They identified a weakness and went right after it, with a loving push from run game coordinator Frank Pollack.

“Frank, he did a hell of a job scheming it up,” Mixon said. “Zac, he stayed true and kept dialing it up, and I’m sure he believed in us, like ‘We can come out here and be physical today,’ and we actually did. Not that we can in any other game, but the fact that he stayed with the runs and (got) us in a groove to be able to be physical, running downhill, we needed that as a whole.

“I felt like, with the backs, the O-line and the tight ends and even the receivers, because I don’t know if you all (saw it), but they were blocking their asses off today. Without (those) guys (the WRs), I wouldn’t be here at this podium. I’m just very thankful and blessed to be here in this situation.”

This is the type of trait you want to see from a team that wishes to impose its will when the weather gets bad or they’re playing on your turf. Remember, the Bengals play four of their final six games at home and they’ll need to be the aggressor against the likes of Kansas City, Cleveland, Buffalo and Baltimore.

Offensive coordinator Brian Callahan sense the offense needed a spark of urgency and he gave them one Saturday night.

“At the end of the day, we try to do whatever we can to impose our will and get the team to really know what type of game it’s going to be,” Mixon told me. “The way that Zac and especially Callahan (prepared us). He had a hell of a meeting on Saturday. You could just tell the hunger and everything in his eyes and we had great preparation all week, but the way that Callahan was getting at us on Saturday — I just loved how he came in with an edge in that meeting and basically everything that he said. We made it happen today, so we spoke it into existence.”

And it wasn’t just on the offensive side of the ball. On first down on Carolina’s second possession of the game, Eli Apple was defending Terrace Marshall on a drag route to the left sideline. Just as PJ Walker’s pass got to Marshall, Apple went airborne, tackling Marshall and knocking the ball to the ground.

It was perfect timing. It was a message sent to the rest of the secondary that even without top corner Chido Awuzie and slot corner Mike Hilton, the starters in this game weren’t going to give an inch.

Jalen Davis played solidly when the game was still competitive in the first half. He didn’t give up any big plays and rookie Cam Taylor-Britt had only a couple of minor hiccups, including an illegal contact penalty late in the second quarter that accounted for Carolina’s only first down of the first half.

For once, not everything was on the shoulders of Joe Burrow. In many ways it was a perfect game for the Bengals franchise quarterback. He was 5-for-5 on the opening drive for 69 yards. He finished 22-for-28 for 206 yards, one touchdown and was sacked just once.

“It was the first complete game of the year,” Burrow said. “It’s how we expect to play every week. Run game, defense, pass game, it was all clicking today. We have to find that sauce and keep it in our back pocket for the rest of the year.”

"First complete game of the year." Joe Burrow wants to "keep that secret sauce in back pocket rest of the year." #Bengals pic.twitter.com/GZxNNU1y8H

The Bengals were humiliated and emasculated on Monday night in Cleveland. No sequence demonstrated this more than late in the first half when Nick Chubb ran in a touchdown and then bullied his way into the end zone on a direct snap for a two-point conversion after the Bengals were caught with 12 men on the field for the extra point. The Bengals lost 32-13.

But Mixon noted after Sunday’s win that the energy was there all week on a short week. Mixon has been on bad teams and good teams. The confidence this team showed behind closed doors gave him hope. And they made him look good for feeling that way on Sunday.

“We had to get that (taste) out of our mouth by locking in going into this week,” Mixon said. “Just knowing the coaches still have that drive and we’re going to bounce back. We’ve got to bounce back. (My) teammates are still working hard, showing up, going to meetings — everyone’s still on a high. It’s a great feeling to come off a loss and come in the locker room and not see your teammates hung low.

“Everyone’s got their heads up, are in great spirits and playing ping-pong, still talking — that’s a great thing to see. Everyone still trusts and believes in each other. Everyone’s going to stay like a brotherhood and that’s what we’ve got to do moving forward, just keep building and getting better. (If we do that), great things will happen.”

The way the Bengals responded Sunday showed that indeed they are capable of putting a terrible game behind them quickly. That’s what they did time after time in 2021, winning five of seven after the bye to clinch the AFC North.

The Bengals need to remember this feeling over the bye and take it with them to Acrisure Field in Pittsburgh on Sunday night, Nov. 20. They also need to prove to themselves that Sunday is the beginning of a trend they can carry with them, like Burrow mentioned, in their back pocket for the rest of the season.