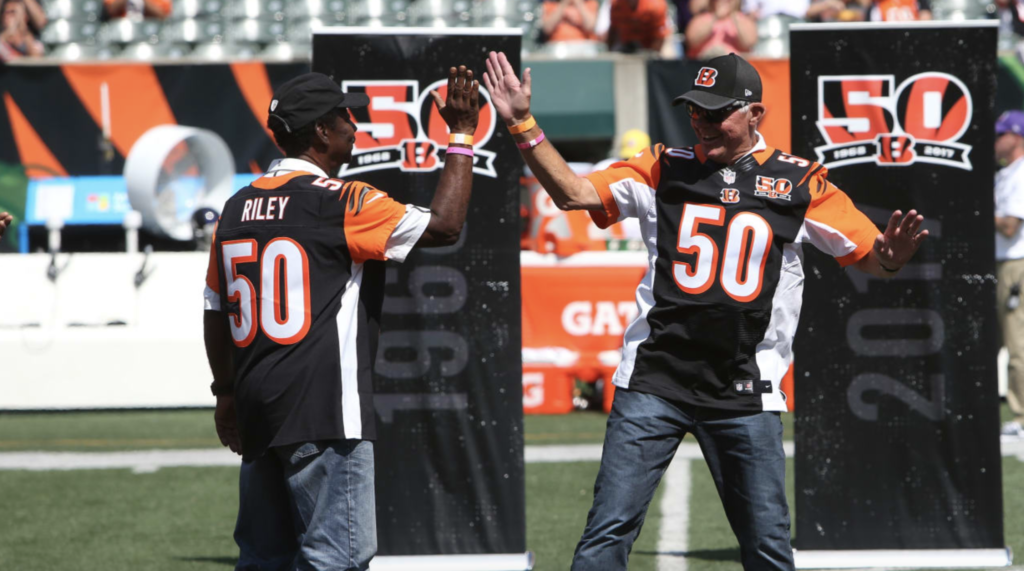 Every week, Mike Petraglia details his observations and analysis about the Bengals, their inner workings and how it relates to their competition in the AFC North. Trags has covered 12 Super Bowls, including all 10 appearances by the New England Patriots under Bill Belichick. Trags is a working member of the Pro Football Writers of America and begins his 29th year covering the NFL in 2021.

Somewhere, Paul Brown is looking down with one of his trademark wry smiles and nodding in approval of the three players that will be joining him as names on the first Bengals Ring of Honor on Sept. 30 at the stadium that bears his name.

After all, you couldn’t pick three Bengals that embody what it meant to father of the franchise and the father of modern football (in the words of Bill Belichick) than Ken Anderson, Ken Riley and Anthony Munoz.

As Paul Brown’s son Mike noted Thursday in a team statement, the fans got it right – and how.
In selecting Anderson and Riley out of a pool of 17 names to join Brown and Munoz as the first four names on the East side of PBS, fans should be commended for their intelligence and perspective on Bengal history.

After all, like Riley’s son Ken II noted, Munoz, Anderson and Riley are the Mount Rushmore of the franchise that has twice come thisclose to winning a Super Bowl. It shouldn’t take a Super Bowl win, however, to recognize just how much class and dignity this trio carried with them on and off the field. Both Anderson (1975) and Munoz (1991) were honored as NFL Man of the Year.

That’s what made them so great in Paul Brown’s eyes. Yes, all three were great players and prepared as such. But they were also great men away from the game.

“It’s special. We’ve had two Hall of Famers in the history of the franchise and to go in with those (is special),” Anderson told me. “I remember when I got down to Cincinnati, it was the second day of the draft and I got to meet Paul Brown behind his desk and just the awe I had to be in his presence.”

Anderson’s 16 seasons – all in Cincinnati – are the most ever in Bengals history. The four-time Pro Bowler played 192 games in a career highlighted by leading the Bengals to their first Super Bowl while winning the NFL MVP and passing title in 1981. Anderson is one of five players in NFL history to win at least four league passing titles, and the only one to win consecutive passing titles in two different decades — 1974-75 and 1981-82.

LIVE: Ken Anderson & Ken Riley II speak with the media about the inaugural class of our Ring of Honor. https://t.co/bjW6eUZhCp

“The Bengals organization is very special to me, and I’m so proud to be a part of the inaugural class,” said Anderson. “We have a great football tradition. It’s one of winning, it’s one of playing hard. That goes back to the Paul Brown days. I’m glad that can be recognized. I think back to those days because I think those days are coming again.

“When you think back to the success that he had in professional football. I think the marks that he made—basically the way that teams operate now, whether it’s an offseason standpoint or how practice is organized and how you meet—Paul Brown started that whole thing.”

While Anderson was in awe of Paul Brown, Riley was constantly trying to prove himself, as his son relayed to me when I asked him whether his dad ever relayed any stories about playing for him.

“I have so much respect for the Brown family, especially Paul Brown, for giving him a great opportunity,” Riley II told me. “He had been in the league five or six years and my dad said he was probably coming off a down season. But coach Brown said, ‘Hey, do you see who we drafted this year?’ I don’t remember who it was, but it was a (high)-round defensive back. He was like, ‘Yeah.’ He kind of was switching my father back from left to right side at corner. He was like, ‘You see who we drafted, we’re looking to replace you.’”

Brown knew that competition would always drive Riley. He drafted three corners in a row in 1970, Riley’s second season, including Lemar Parrish. Then in 1972, he added safety Tommy Casanova and corner Bernard Jackson. Riley would always be the leader of that group, no matter who Brown drafted, and coach and player knew it.

“And my father being a competitor, he said the next game, he picked up two interceptions in the preseason. Coach Brown said to him, ‘That’s what I’m talking about. Now get back on your side.’ He never switched sides again. It was a great story that showcased coach Paul Brown is all about business and my dad just being a competitor, like, ‘Hey, OK, well I’m going to show you.’ I thought that was a great story about both of them and their characters.”

Indeed, so much of honoring Riley, Anderson and Munoz is about what Paul Brown saw in their character. Yes, they had to evolve into premiere talents under Brown because “winners make believers of us all” but it was just as important to Brown that all three knew how to lead by their behavior and character off the field.

“He was a competitor,” Riley’s son said. “Not only a competitor, but he was very intelligent. So, I think he would have fit right in. The thing is he was a complete player. Not only could he play the pass, but he could also support the run. I think that’s what kind of separates, they say shutdown corner, but it’s best to be a complete corner where you can do both.”

Riley’s 65 career interceptions are the fifth most all-time, and the most by a pure cornerback in the NFL. Riley played in a Bengals-record 207 games as the only defender in team history to play 15 seasons. He holds the team record for interception return yards (596) and interception returns for touchdowns (5). He also, at the age of 36 in 1983, intercepted eight passes and returned two of them for touchdowns, including one against former Bengal Jack Thompson at Tampa Bay.

“The Ring of Honor is the Mount Rushmore for the Bengals. It’s incredible for my father to be included in the inaugural class,” Riley said in a team statement. “To be recognized by the fans, that makes it even more special. My father would receive so much love every time he came back to Cincinnati, and to have them vote him in makes it that much sweeter.”

Sadly, Brown, who passed in 1991, and Riley, who left us in 2020, won’t be there to see their names on the East façade. But their spirits and legacies will now rightfully live on every time anyone steps foot into Paul Brown Stadium.

Some other highlights from Thursday’s availability with Anderson and Riley’s son: