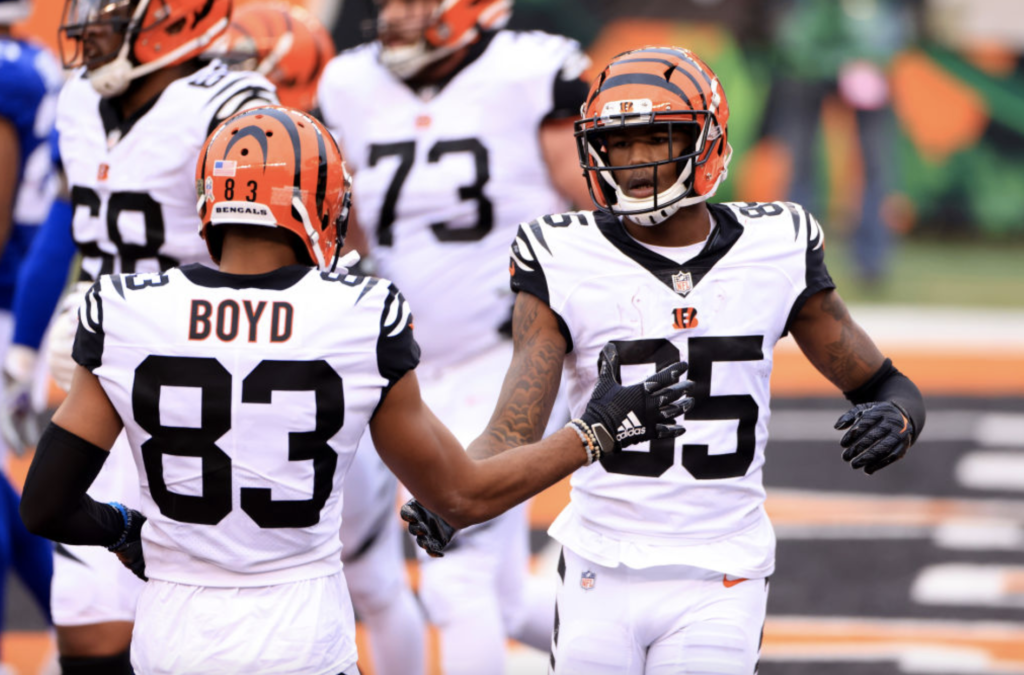 Every week, Mike Petraglia details his observations and analysis about the Bengals, their inner workings and how it relates to their competition in the AFC North. Trags has covered 12 Super Bowls, including all 10 appearances by the New England Patriots under Bill Belichick. Trags is a working member of the Pro Football Writers of America and begins his 29th year covering the NFL in 2021.

CINCINNATI — The Bengals have big dreams coming into 2021. Those dreams include transforming a rebuild into a return to playoff contention. They have one thing going for them that all playoff teams have, upper echelon talent at skill positions – at least on paper.

They have – presumably – their franchise quarterback in Joe Burrow set to return from ACL reconstruction of his left knee and set to begin training camp in July at close to full speed.

They have a projected group of wide receivers in Tyler Boyd, second-year receiver Tee Higgins and a deep threat in Ja’Marr Chase they valued so much that they passed over a potential franchise left tackle with their first pick in April. This trio should strike fear into the hearts of even the deepest of secondaries and defenses in the league.

They have a deep backfield led by Joe Mixon which needs to find its footing behind a re-worked offensive line.

Their secondary should be a strength with free agents Trae Waynes, Mike Hilton and Chidobe Awuzie, Eli Apple and Ricardo Allen joining Darius Phillips. Those corners will be quarterbacked by one of the best in the game in free safety Jesse Bates III – a true leader – and veteran strong safety Vonn Bell.

As we mentioned last week, special teams coordinator Darrin Simmons has already hinted that the job of punt returner and place kicker will be wide open.

The key to this roster and its ultimate success – as is the case with any team with playoff aspirations – is its depth. That’s where the 2021 Cincinnati Bengals MUST make a huge jump. And, in theory, when you make the kind of moves that the Bengals made this offseason in free agency and the draft, it should make the back end of the roster that much better.

The Bengals finished their one-day mini-camp on June 15 with 85 players on the roster.

It is with all of that in mind we present the 2021 Cincinnati Bengals 53-man Roster Projection 1.0:

This is pretty much a no-brainer. Burrow is the franchise starter and 28-year-old Brandon Allen has understanding of the system, having been there at the end of 2020. There’s no reason to carry more than two on the active roster. Those spots are too valuable for versatility in other areas.

Mixon is the clear-cut go-to back, who figures to be a huge factor in taking the running game to the next level to A) keeping defenses honest on the outside and B) keeping defenses from coming after Burrow on every snap.

It’s the other spots that give the Bengals hope for tremendous growth, as Perine proved to be a back who could carry a decent load when Mixon was lost for the season in 2020. Keep a close eye on rookies Chris Evans (Michigan) and Pooka Williams (Kansas), backs who offer a change of pace and the elusive Williams, who might get a chance in return game.

No position on the roster has more competition than tight end. The team has used seven of its 85 spots so far on tight end. Does this speak to the wealth of talent there or the team’s desire for someone to step up and impress them behind Sample and Uzomah?

Will Joe Burrow throw over or under 4,250.5 passing yards this season?
pic.twitter.com/G07NPxC2fJ

Or both. Thaddeus Moss is certainly someone to look closely at and consider a favorite because of his LSU ties with Burrow and the singular skill he put on display at a hybrid spot in college since he’s not a traditional every-down, in-line tight end. Our friends at Ourlads have the scouting report on Randy’s son.

Trent Taylor (Louisiana Tech) is someone to keep an eye on here because he provides the Julian Edelman look to the offense. Will push Tate, Irwin and Morgan. Tough over the middle. Can play special teams. This is truly where the Bengals can develop some back-end depth and use someone who can return kicks like Alex Erickson. The top trio has the game-breaking potential to be as good as any in the game.

This group will have the most laser-focused attention in camp because it has been the area over the last four seasons that has most consistently failed the offense. It’s also the hardest group to project. Its inability to gain footing has crippled the run game, with only Mixon’s singular talents and Gio Bernard’s determination giving it a pulse. Its inability to protect the quarterback has resulted in Andy Dalton, Joe Burrow and everyone in between feeling unsettled in the pocket, and eventually cost Burrow his left ACL last November.

Here’s the play where Joe Burrow was injured

Michael Jordan vs. Hakeem Adeniji figures to be a back-end battle, assuming the Bengals keep the three 2021 draft picks (Hill, Smith, Jackson) they used on the line. Su’a-Filo and Reiff are free agents that presumably have roster spots locked in. Williams is coming around at left tackle and Hopkins, Price and Hill are their options at center. Jordan (2019 4th round) has the most to prove after he got beat in that Washington game that ended Burrow’s rookie season. That might be enough motivation to beat out Adeniji (2020 6th round). With the emergence of Hopkins and the drafting of Hill, Price gets one more chance in camp and preseason to prove he’s not a 2018 first-round bust.

Geno Atkins is still a free agent as we write this. He’s 33, coming off rotator cuff surgery and could be headed to Dallas to join the Cowboys. He’s the most decorated interior lineman in team history, and yes, we’re including Tim Krumrie. He was the singular anchor of the Bengals defensive interior. He was a two-way threat on run and pass defense. But onto the future and that’s what the Bengals have done with DJ Reader and Larry Ogunjobi, a pair of free agents. They have Mike Daniels, who filled in for Atkins last year, and draft pick Tyler Shelvin out of LSU, a 6-2, 360-pound 2-gap tackle who certainly could emerge.

Again, the team’s efforts in free agency and the draft tells you all you need to know about what it believes it needs to do to be more athletic and productive on the edge. Hendrickson is the perfect complement to Hubbard as bookends. Sample, Ossai and Hubert are good young pieces that should develop, if not rushed into prominent roles too earlier, though Ossai could be first to emerge. Will be interesting to monitor in preseason and camp which of these players can play most effectively outside.

Sometimes you look at what a team does to address needs. Then you notice when a team does nothing at a position and draw your conclusions. It’s clear that the Bengals are pretty satisfied with what they have at linebacker, since they did not add to the position through the draft or free agency. Wilson and Pratt emerged last year as leaders of that group and Wilson will likely wear the green dot to start the season as the team’s most reliable three-down linebacker. With so much depth and versatility in their secondary, the Bengals aren’t going to ask their linebackers to do too much, nor should they in this day and age. If the group can simply make the plays in front of them, the Bengals defense will be significantly improved, and that starts with Wilson.

It will be fascinating to see who emerges from this group in certain situational groups. Will Darius Phillips and Chidobe Awuzie get the nod to start the season on the outside? Hilton and Waynes will battle for nickel back time and Ricardo Allen and Eli Apple provide depth. The Bengals were aggressive in adding to this group in the offseason, as the additions of Awuzie, Waynes, Hilton, Allen and Apple indicate. They need camp to mesh and get on the same page.

This group starts with Bates, who is in line for a big payday and in the final year of his rookie deal.
He is the leader of the secondary and when he’s on the field the Bengals are usually organized on the backend.

He’s only 24 and figures to be a huge part of what the Bengals are building for years to come. Vonn Bell is the veteran big hitter in his second season with the Bengals as strong safety. His blowing up of JuJu Smith-Schuster over the middle on Monday Night Football in December was the singular positive defining moment of a 4-11-1 season in 2020. It’s the kind of hit that could mean something if it carries over to 2021.

"You've got to go out there between the lines, go out there and hit him." – Vonn Bell when asked earlier about JuJu dancing on the logo

JuJu just got rocked by Bell on the field 😳

The Bengals are to be respected on the back end when these two are on the field together. Both Bell and Bates have an eye for the ball and are productive in the PBU and interceptions department. Brandon Wilson and Trayvon Henderson figure in the special teams department.

Yes, the Bengals brought in yet another Buckeye to challenge a Bearcat in Kevin Huber. But the punting job appears to be Huber’s as long as he wants it. He’s getting better with age, averaging a career-best 47.2 yards per punt in 2020, his 12th season in the NFL. Drue Chrisman will give Huber a break in preseason games and get an opportunity to build his resume tape. But barring injury, this should be Huber’s 13th as Bengals punter. You don’t usually spend a fifth-round pick on a kicker unless said kicker is making your roster. That would appear to be the case with 21-year-old Evan McPherson out of Florida, a kicker who has had to overcome COVID to find his way into Cincinnati via a fifth-round pick on May 1.

“He’s done fine,” Special teams coordinator Darrin Simmons said. “He’s what I expected to see. He has a very strong leg. Very talented. Because of all the COVID stuff don’t’ have much time to spend time with him other than Zoom before he draft. He really has a solid feel for his technique and what it takes to kick. He has a really good feel for a young guy. You’ve got to remember; he should be a college senior. He’s a year behind where a lot of these guys are. I think his feel is outstanding. He’s well on his way.”

McPherson figures to get every chance to beat out Austin Seibert, the waiver wire claim from Cleveland. Barring injury, Clark Harris returns for a 10th season in Cincinnati, though it would not be surprising to see the Bengals and Simmons bring in someone to serve as his backup should he get injured.