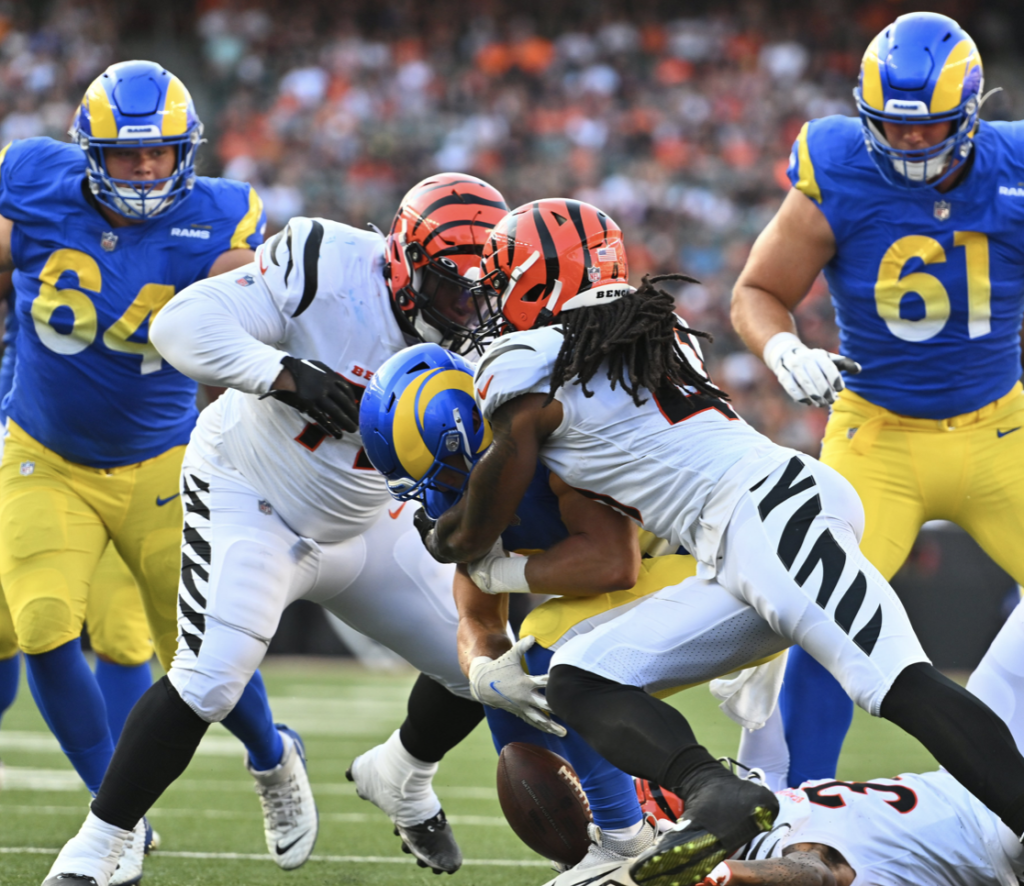 CINCINNATI – The Bengals have a wealth of depth at key areas and needs at others as the 53-man cut deadline of Tuesday at 4 p.m. ET approaches.

The Bengals have an added advantage this year at the cut deadline as they have been granted a two-week roster exemption for safety Jessie Bates III, who signed his franchise tag this past week. So the 53-man is actually 54, if the Bengals so choose.

They could use that to keep a player they intend on placing on injured reserve, designated to return, to start the season. Bates can be immediately activated from the reserve exempt list at any time before the exemption expires Sept. 6.

While Drew Sample ran sprints before Saturday’s preseason finale and appears close to returning from a sprained MCL in his left knee, the Bengals could use that spot to keep a player like tackle Isaiah Prince (biceps), place him on injured reserve to start the season and bring him back later.

The other factor to keep in mind is the guesswork that goes into cutting players the Bengals believe might make it through waivers to bring back on their practice squad, which was expanded to 16 players during the pandemic and has remained at that level.

“There’s always guys that you’re trying to do the math on what you’re going to keep and what position depth is important,” Bengals coach Zac Taylor told me after the 16-7 win over the Rams Saturday. “I like that we’ve got 16 guys now — that’s helpful. You can fill a lot of needs there. Again, we have tough decisions to be made. You can’t keep everybody that’s been on the roster. You certainly consider that over the last week and a half that would be good development players.

“You weigh everything. That’s part of the decision-making process. Sometimes that comes up in a year, and sometimes it doesn’t. We’ll start having those conversions over the next 48 hours.”

With the clock ticking on the back end of the roster and cutdown coming on Tuesday, here is your final Bengals 53-man roster projection:

Trags take: This is not as much of a lock as thought heading into camp and into the preseason. Browning has put up better numbers, including 19-of-24 for 179 yards Saturday night and a late touchdown pass to tight end Justin Rigg that sealed the win. Browning made his best pass of the night when he perfectly lofted a pass over the outstretched arms of a linebacker and into the arms of Trayveon Williams for a 20-yard gain to the Rams 26 that set up the touchdown. Browning was 42-of-64 for 458 yards and a touchdown in three games. He led a late fourth-quarter drive against the Giants that put the Bengals ahead. Allen suffered a concussion in the first quarter of the opener against Arizona and finished 11-of-15 Saturday for 130 yards, including two terrific touch passes to the sideline to Stanley Morgan and Kendric Pryor. He took an awful sack on the first drive that took the opportunity to go for a touchdown out of the coaches hands. Browning has better mobility. Allen has more familiarity and a working relationship with Joe Burrow and is a good passer when the pocket is there. Browning gets the nod by the narrowest of margins because of how he can improvise when a play breaks down.

Trags take: There’s no change here. Trayveon Williams runs well downhill with low center of gravity while Jacques Patrick appeared to leave late in the game Saturday with a limp.

Trags take: A couple of presumptions here. Sample should be ready or close to ready for Sept. 11 against the Steelers. Hurst and Sample are by far the most accomplished tight ends on the squad. The Bengals could decide to keep Wilcox and then place him on IR/designated to return. Rigg, Wilcox, Eubanks and Moss are all candidates for the practice squad. Moss had a bad drop on a wide-open seam route in the fourth quarter Saturday night.

Trags take: Taylor has shown great hands in all three preseason games, the most valuable tool to special teams coordinator Darrin Simmons. Never was this more apparent than Saturday night in the first quarter when he fielded a low line drive punt high and tight and then, with the ball secured, raced up the left sideline for 31 yards. Lassiter got his chance on the next Rams punt. He muffed it and recovered it. As we learned from Darius Phillips against San Francisco last season, ball security is everything to Simmons. Taylor locked his spot Saturday night. Lassiter still produced offensively and should find his way onto the practice squad. Pryor is one of the most athletic receivers on the team not named Ja’Marr Chase. Bengals value this.

Trags take: Volson has the starting left guard spot sewn up. If Carman weren’t a second-round pick in 2021, he’d be a candidate to be cut. His performance in two preseason games was not good. Saturday underlined how much he needs to refine his footwork, a bad whiff on a sack of Brandon Allen, a trip over himself on a first quarter run when he was trampled in a pile and a hold to start the last drive of the first half that ended with a nice recovery by Jake Browning. Trey Hill has shown to be the most viable backup and this is a group that could use a trade or a keen pick up off the waiver wire for much-needed depth. Prince could go to the IR/designated for return once he lands on the active 53-man roster.

Trags take: Johnson and Spence were part of a great defensive effort Saturday night that forced three fumbles and recovered two, including one inside the Bengals 5.

Trags take: Davis had a fumble recovery and Zach Carter had a 17-yard sack and a forced fumble. This continues to be one of the deeper groups on the roster. The 26-year-old Davis has shown enough out of UNC-Pembroke to earn a spot on the team. He’s had a productive preseason and has taken to the coaching of Marion Hobby. Tisdale and Shelvin are PS candidates.

Trags take: Very little has changed about this group. It’s a very solid group going into the season with Logan Wilson recovered from his shoulder surgery.

Trags take: The core injury to Taylor-Britt means Jalen Davis likely earns a spot to begin the season. Davis also is valuable to special teams and has experience there. George and Hood are PS candidates.

Trags take: Bates is back and this group is firmly in place. Wilson was officially placed on PUP so he’s out the first four games. Trayvon Henderson was flying all over the field Saturday and had a chance at a pick-6 in the first quarter but the ball went through his hands. He came out of the game after taking a hit from his own teammate in the third quarter. Henderson appears a likely PS candidate.

Trags take: McPherson finished the preseason 9-for-10 with his only miss coming from 58 yards against the Giants. He is primed for a huge season. If Drue Chrisman is his new holder, that bears watching early in the season.

Trags take: Chrisman hit a pair of punts Saturday that seemed to satisfy what special teams coordinator Darrin Simmons was looking for after the game against the Giants. His 65-yard boomer came close to a 61-yard beauty at the Rams 4 but it bounced into the end zone for a touchback and a net of 45 yards. His other went 42 yards to the Rams 29 for a touchback. Chrisman improved his holding technique from last year and that’s good enough to assure a consistent kicking operation. Huber had a great 14-year run but Simmons said last week he was intent on doing what was in the best interest of the team now and that means the stronger leg.

"It's everything I've been dreaming of" Drue Chrisman on closing in on a punting job with Bengals pic.twitter.com/6bEIoWqPSL

Trags take: Harris was his reliable self all preseason and should have his spot back after a push from rookie free agent and top college long snapper Cal Adomitis.