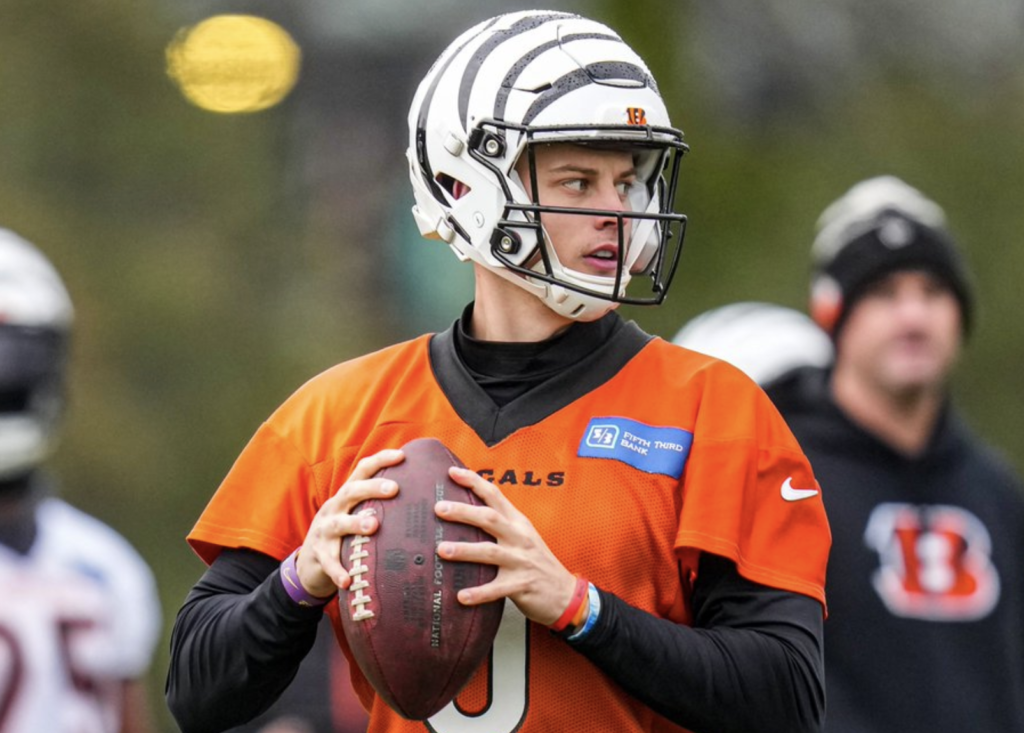 The Bengals quarterback was the first one after the 0-2 start to tell everyone to “calm down” and assuring everyone that the team will be fine.

Fast forward 10 weeks later, the Bengals are actually 1.5-point road favorites heading into Nashville to take on the AFC South-leading Titans. Burrow is one reason why. The way team has played through adversity is another.

And the likelihood of getting Ja’Marr Chase back this week is another.

One look around the NFL and you start to appreciate what the Bengals have in Burrow and his ability to lead. Zach Wilson was benched after his second loss this season to Bill Belichick and the Patriots last week. He doesn’t have the locker room pull that Burrow has and his head coach – Robert Saleh – certainly doesn’t have the faith in him that Zac Taylor does in No. 9.

Maturity is a term that gets thrown around a lot in sports. Take one look at the Bengals roster, and the ability to handle adversity is something that has become increasingly apparent.

That maturity helped Burrow and the Bengals handle the 0-2 start, the gut-punch loss on Sunday in Baltimore in October and the emotional and physical loss in Cleveland.

How mature is this Bengals team?

“Very mature. A lot of our key players are young guys, but we’ve played a lot of football,” Burrow told me. “We have the right veteran guys mixed in throughout the roster that have been around the league, guys like Michael Thomas on special teams, great locker room guy.

“And some of these guys, the Kevin Hubers of the world that have been around here a long time, that have seen a lot of things and kind of help us guide us through that. We’ve been through a long playoff stretch now and we know what it’s going to take down the stretch to get to where we want to get to. We have the experience to go and do it, we’ve just got to execute.”

If you watch Burrow closely, watch how calm he is in big moments like last week in the second half in Pittsburgh. He doesn’t flinch. It’s about controlling the moment and with Burrow in charge, the offense was able to string together long scoring drives, including a 93-yard, 10-play drive that gave the Bengals a 34-23 lead.

“We know the kind of team that we are,” Burrow continued. “We show it at practice every day, we practice hard and we work really hard to improve upon the reps that we’ve had that maybe aren’t great and we don’t go out and make the same mistake twice. I think you’ve got to credit the culture of the team and the locker room and what Zac preaches every day.

“I think that’s why you see when Ja’Marr or Joe Mixon goes out, you see guys step up and make plays. When DJ goes out, Jay Tufele comes in and is making plays on defense. I just think that’s a credit to the coaches and those guys themselves.”

Every NFL quarterback that accepts a starting role accepts more than just leading the team in the locker room. Again, Burrow’s understanding of this accountability is remarkable and something the Bengals identified in their research of him before the 2020 draft.

“I think that’s one of my strengths as a quarterback, you’re kind of relaying a message to you guys, the media, to the fans, about what the locker room thinks week-to-week and you’re doing it in a diplomatic way,” Burrow said. “I think that’s something that I’ve been good at is understanding the message that I want to get across, and choosing my words carefully to do it.”

Joe Burrow might get Ja'Marr Chase back this week if the WR clears all the hurdles in practice #Bengals pic.twitter.com/YenzoqVHk3

As for as his wide receivers are concerned, he might get Ja’Marr Chase back this week, restoring his full complement of weapons. And it’s the unspoken communication that raises this offense to the next level.

“Yeah it depends on the series,” Burrow said. “Sometimes there’s stuff to talk about and sometimes there isn’t. Sometimes what’s understood doesn’t need to be talked about. TB didn’t have a lot of targets throughout the game and then you see him step up in the fourth quarter making huge catches for us down the stretch. That’s a credit to the culture in that room and in the locker room.

“Maybe if things aren’t going your way, you’re not going to sit and pout. When your opportunity comes, it’s going to matter. You’ve got to credit (Tyler Boyd) for that. That’s what I love about those guys. There’s no ego, there’s no, ‘Man, I didn’t get a touchdown this game. I’m not getting targets.’ They’re going to go out and do what they’re supposed to do and when they’re opportunity comes, they’re going to make it.”